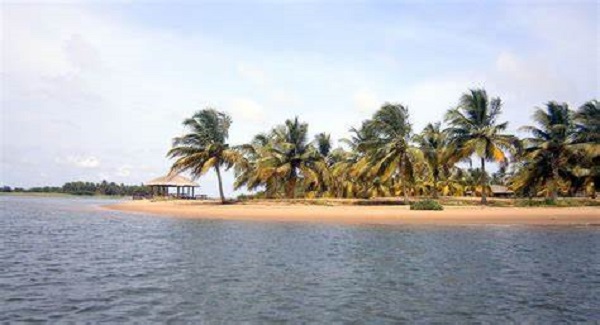 It is definitely one of our beach destinations and a choice getaway. I am referring to one of Ghana’s eastern coastlines just about an hour outside the capital.

Let us hike to Ada and experience a fishing town with a chain of beach resorts on your drive towards the Volta Region.
While there, you can also explore the market at Ada-Foah on Wednesdays and Saturdays for varied sea food selection – fresh clams, shrimp, crabs and several varieties of fish all for great prices.

Ada is special because it is the point where the Volta River meets the Gulf of Guinea. In other words, it is located at the mouth of the Volta River, an area that is easily Ghana’s most extensive beach front destination. It has the sea, the Volta River and the Songhor Lagoon.

Again, what makes it special is the estuary where the river flows into the sea. Imagine rainwater rushing from drainage into a big gutter. Now the energy and the splash in an estuary phenomenon make it a thousand times more boisterous.

If you consider that spot as a place to slip, that becomes a very scary proposition; one will be swallowed in seconds. But if you watch from a safe distance you’d appreciate nature and most importantly, the works of God.

Ada boasts of both exquisite beaches and gorgeous riverfront scenery. This place is famous for water sports such as swimming, sailing, fishing and boat cruises. There are paddle boats and pontoons for group fun. For speed enthusiasts, one could rent speed boats and jet skis.

Hotels in the area include Aqua Safari, Dreamworld, Tsarley Korpey, Maks Resort and Ezime Guest House. Then there’s the new exclusive Korkoe near Aqua Safari. For those who love fishing, excursions can be arranged. A ferry is also available for a cruise around the islands in the River Volta. With the help of the Wildlife Division, one gets the chance to go bird watching.

The Ada salt field offers visitors the opportunity to watch locals engage in an important livelihood activity. One can watch the stages of salt production: from inducing salt water from the ocean into the pans, to crystallisation when it dries and to washing and packing the salt into bags and loading them unto trucks.

There are three main markets in the Ada area. The big one is at Kasseh on Tuesdays and Fridays. The other two are at Ada Foah which falls on Saturday and every Wednesday and at Anyanui which is across the other side of the river.

Ada Foah provides the secondary venue for the annual Asafotufiami Festival that takes place during the first week of August. The main venue is Big Ada.

At Ada you don’t only have hours of exploring one of the most beautiful areas of Ghana, you are also in a vibrant trade zone. The place used to be a major trading centre and trade was one of the main sources of income.

There were large warehouses for storing the trading goods close to the seaside. Its special location at the estuary ensured quick transportation along the Volta River up to Salaga in the north. The economic activities reached a peak around 1901 when a transportation system called the Volta River Transport System was launched.

But the place has a history, an illustrious one if you ask me. The Dutch were the first to open trade between Europe and Ada in the 16th century and built a new trading post here in 1775.

Later, the Danes took over, who at this time had power over the whole coast east of Accra. They remained in Ada for more than 100 years and had business relationships with the locals.

To defend their trading post against the attacking neighbouring tribes, the Danes built Fort Kongenstein in 1783. Today, only a few traces of Fort Kongenstein are found in Ada, the most parts having been devoured by the ocean. But while it stood, the fort was the defining landmark. In actual fact, the ‘foah’ in Ada is actually a corruption of ‘fort’. So now what are you waiting for to visit?