Stay away from smokers - Children cautioned 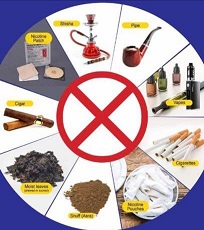 The Head of Tobacco and Substances Abuse Directorate of the Food and Drugs Authority (FDA), Dr Mrs Olivia Agyekumwaa Boateng has asked youngsters to stay away from smokers.

This is because second-hand smoking can expose them to serious health problems.

Explaining further, she said, children who are exposed to smoke face the risk of developing diseases such as asthma and other cardiovascular diseases.

Dr Boateng who was speaking in an interview with the Junior Graphic noted that children could experience these health challenges now or later in life.

“A continuous exposure to smoke over a long period of time usually has the same effects on the child as the one who smokes”, she noted.

Second-hand smoke is the combination of smoke from the burning end of a cigarette and the smoke breathed out by smokers. A secondary smoker is one who accidentally inhales smoke when they are near sources of tobacco smoke.

She, therefore, urged children to always report to their parents or teachers if anyone smokes around them and avoid places where people smoke.

Dr Boateng said when children were exposed to second-hand smoke, they got sick more often.

“Wheezing and coughing are more common in children who breathe second-hand smoke. They are also more likely to get ear, nose, and chest (upper respiratory tract) infections. Children with asthma who inhale smoke have more severe and frequent asthma attacks, ” she said.

Dr Boateng also said children who were always in smoke-prone areas and inhale it were most likely to develop stroke, heart attacks, and lung cancer.

She said secondary smoking, aside from its harmful effects on the human body, also destroyed the environment.

“ More than 7,000 toxic chemicals are released into the atmosphere during smoking which pollutes the environment”, she indicated.

Dr Boateng advised children not to allow anyone to lure them into smoking because a child who smokes is likely to go wayward and destroy his/her future.

“He /she might become a drug addict and engage in illegal activities to continue to have enough money to keep buying these products”, she cautioned.

She added that youngsters who smoke were equally at a high risk of acquiring chronic heart and lung diseases just as secondhand smokers.

Dr Boateng, therefore, called on teachers and parents to play an instrumental role in their children’s lives to detect when there was a change in behaviour.

“Be patient listeners. Talk openly about harmful effects of tobacco use early to children and discuss ways to respond to peer pressure to reduce their risks of engaging in smoking”, she stated.

These device, she said, delivered chemicals into the lungs of users.

Furthermore, she said the rate of shisha use by the youth in secondary and tertiary schools has increased due to misconceptions that it is a safer alternative to cigarettes.

According to the World Health Organisation (WHO), a session of shisha smoke is equivalent to smoking 100 to 200 sticks of cigarette.

“There is no safe form of tobacco use whether sniffed, chewed, sucked, inhaled or smoked”, she stressed.