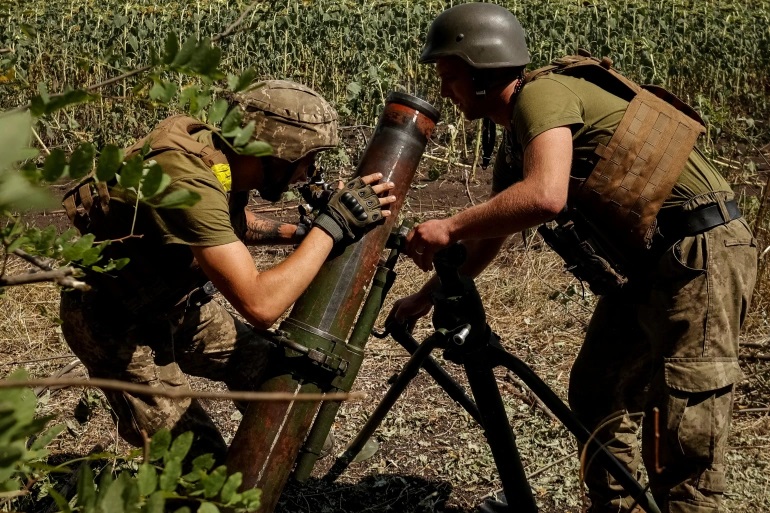 Six months have passed since Russian President Vladimir Putin launched his unprovoked invasion of Ukraine, a war that by any conventional measure has been a calamity.

Millions of Ukrainians have been displaced. The city of Mariupol has been nearly wiped from the map. And the offensive launched on February 24 has showcased moral rot within the Russian military and its complete disregard for civilian lives.

By the Pentagon's latest reckoning, the invasion has cost Russia between 70,000 and 80,000 troops killed and wounded. Even if that estimate is on the high side, it's fair to extrapolate that Russia has probably seen more troops die in half a year's fighting in Ukraine than the Soviets lost over a decade of war in Afghanistan.

But any comparisons of Putin's Russia to the waning days of the USSR are premature. Russia has indeed changed since February 24, but cracks in the edifice of Putinism are hard to discern. The majority of Russians have -- if not overtly -- supported the war, or have silently acquiesced to his campaign of imperial restoration.

The Kremlin leader's ratings have been unaffected by the war. Both state pollster WCIOM and the independent polling agency Levada-Center routinely put Putin's approval ratings above 80% since February 24. A WCIOM survey in June found that 72% of Russians were likely to support Putin's "special military operation," the official euphemism for the war in Ukraine.

How is Putin maintaining his approval ratings?
It's tempting to conclude that these numbers simply reflect the power of Russia's state propaganda and its dizzying ability to construct an alternate reality, in which Russian warships are not sunk by Ukrainian missiles and Russian bases blow up by accident.

After all, the Russian government moved swiftly after the invasion to shut down the remnants of Russia's free press, introducing a draconian new law that imposed severe criminal penalties for "fake" information discrediting its armed forces.

But that doesn't mean no information is getting out about Russia's disastrous losses in Ukraine. The Russian independent news site Mediazona -- which was labeled a "foreign agent" last year by Russian authorities -- has documented 5,185 military deaths, based on local news reports and social media posts.

The country's relatively well-off middle classes have likely been insulated from the war's toll. Many of those killed in action are from poorer regions of Russia; the regions with the highest numbers of documented casualties are so-called "ethnic republics" of Dagestan and Buryatia, Mediazona found. By contrast, casualties from Russia's two wealthiest and most populous cities -- Moscow and St. Petersburg -- have been relatively low, it reported.

Putin's popularity is sometimes chalked up to a climate of fear and conformity. According to OVD-Info, an independent group that tracks detentions in Russia, 16,380 people have been arrested or detained for anti-war activism in Russia, and 75 criminal cases have been opened under Russia's "fake news" law.

Unsurprisingly, Russia's invasion of Ukraine has revived discussion among scholars about whether or not Putin's regime should be labeled as fascist. That may seem largely a question of taxonomy, but it points to a clear reality: After February 24, terms such as "autocratic" or "authoritarian" are inadequate to describe a state that tolerates no internal dissent.

Will public opinion turn?
That said, some observers wonder how long Putin can count on the support of broad segments of the Russian public amid harsh international sanctions that have isolated Russia from the global economy and drastically cut the supply of imports. Western investment has largely fled the country. Sectors of the economy such as aviation, which have long depended on aircraft manufactured in the US or Europe, have been hard hit.

As CNN's Clare Sebastian recently noted, Putin and his technocrats have worked for years to sanction-proof the Russian economy, through import substitution -- developing homegrown replacements for imported goods -- and developing a payments system to avoid financial isolation.

And Russia has spun the awkward rebranding of McDonalds and Starbucks into tales of economic resilience.

But a recent study by the Chief Executive Leadership Institute of the Yale School of Management paints a more dire picture.

The study's authors argue that Russia does not have the infrastructure to simply pivot energy exports such as natural gas to Asia; Russian manufacturers lack parts from international suppliers; and that Russia's official statistics are papering over the depth of Russia's economic retreat.

"Despite Putin's delusions of self-sufficiency and import substitution, Russian domestic production has come to a complete standstill with no capacity to replace lost businesses, products and talent," the report says. "The hollowing out of Russia's domestic innovation and production base has led to soaring prices and consumer angst."

Still, Russia's financial system has not collapsed, and consumer anxiety has not translated into political unrest. For Ukraine and its supporters, the conversation has now shifted to finding ways to inflict pain on Russians for their passive support of Putin.

"We are working on new sanctions against Russia and on stimulating the citizens of the terrorist state to feel their share of responsibility for what is happening," Ukrainian President Volodymyr Zelensky said in a recent address.
"The discussion about visa restrictions in Europe for holders of Russian passports is expanding every day, new states and new politicians are joining it."

It's unclear if a visa ban would ultimately change Russian behavior. Some European leaders -- most notably, German Chancellor Olaf Scholz -- have been reluctant to endorse a ban. Speaking at a recent press conference in Oslo, Scholz told reporters that leaders had to be "very clear" on the visa ban issue as the actions in Ukraine are "Putin's war" and "not the war of the Russian people."

And while Putin may be the decider, to borrow a George W. Bushism, there is also a collective Putin that supports him and helps realize his policies. Whatever economic consequences they face from sanctions, Putin's loyal oligarchs have not broken ranks.

"Putin's war with Ukraine has been going on for 6 months now," wrote imprisoned Russian opposition leader Alexey Navalny in what he called a "rage thread" from behind bars. "From Day 1, Western leaders firmly stated that Putin's oligarchs and bribe-takers would face imminent sanctions and wouldn't get away this time. But they did."

It's a dismal picture, and one that suggests that Putin -- who has survived snubbing by world leaders before -- is willing to play a long game here. He may perhaps be counting on the fact that, over the next six months, Europeans will be paying higher prices for energy, potentially raising the pressure on governments to push Ukraine to submit to a peace deal. Winter may be coming, but Ukrainians are also fighting for their national survival.