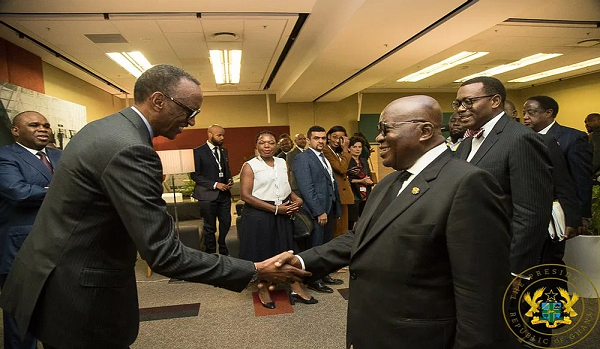 The President of Rwanda, Paul Kagame has congratulated his Ghanaian counterpart President Nana Addo Dankwa Akufo-Addo on his re-election.

In a tweet, President Kagame said Akufo-Addo’s re-election is a testament to the trust the people of Ghana have in him. President Akufo-Addo of the incumbent New Patriotic Party (NPP) won Monday's general election with 6,730,413 representing 51.595% while his main contender John Mahama of the NDC had 6,214,889 representing 47.366%.

Former military leader Kagame added that he was hopeful of more collaboration between the two countries.

He tweeted: "Congratulations to my brother and friend President @NAkufoAddo on your re-election. It is a testament to the trust the people of Ghana have placed in you. We look forward to continued friendship between our two nations and collaboration towards the prosperity of our people".

Last month, the two countries resolved to boost bilateral relations with Rwanda inaugurating the Chancery of the Rwandan High Commission in Accra.

In a victory speech at his Nima residence in Accra on December 9, 2020, President Akufo-Addo said his immediate task is to regain Ghana's reputation as the fastest-growing economy in the world by reversing the effect of the COVID-19 pandemic on citizens.

He added that he would do all to put the nation on course for a full economic recovery.

"Before the pandemic struck, Ghana in recent years was one of the fastest-growing economies in the world, I give you my word, we will regain that reputation," he said.