Brexit: UK-EU trade talks to resume with one day to go 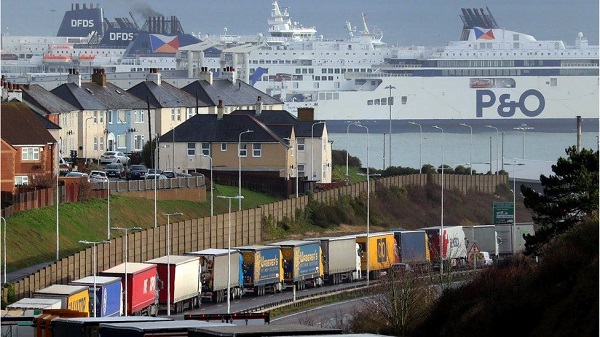 There are long queues of traffic at the Port of Dover as the clock ticks down for a trade deal to be reached
30.5k Shares

Trade talks between the UK and European Union are due to resume in Brussels with one day to go until a deadline imposed by the two sides.

The leaders of both parties have warned they are unlikely to reach a post-Brexit trade deal by Sunday.

On Friday, Boris Johnson chaired a "stock-take" on the UK's preparedness for a no deal scenario.

The Sunday deadline was set by Mr Johnson and European Commission President Ursula von der Leyen after the pair met in Brussels on Wednesday, after months of talks failed to achieve an agreement.

Mr Johnson said the EU needed to make a "big change" over the main sticking points on fishing rights and business competition rules, while Mrs von der Leyen said no deal was the most probable end to "difficult" talks.

The EU has rejected Mr Johnson's request to bypass the European Commission and speak directly to French President Emmanuel Macron and Germany's Angela Merkel about the unresolved issues.

According to EU officials, he was told discussions could only take place through the bloc's chief negotiator, Michel Barnier, who is meeting with his UK equivalent in Brussels.

There's no denying that the prospect of the pain of no deal at all with the UK certainly weighs on EU minds.

A German think tank has estimated that up to 700,000 European jobs could be at risk.

But Europe's leaders are keen to clarify they won't personally intervene in the current impasse in trade talks. There'll be no last-minute handshake or "a-ha" moment in Paris, Warsaw or Berlin.

Behind the scenes, leaders are involved in discussions with their negotiators, but they don't want to be face-to-face, or ear-to-ear, with Boris Johnson in public.

EU countries are joined together in their single market. So no individual EU leader - not even the most powerful ones, in France and Germany - can be perceived to be making the political compromises that could clinch the UK deal.

Concessions will have an impact on the whole single market - and therefore all member states, as a collective.

A major sticking point in negotiations has been access to UK fishing waters, with the EU warning that without access to UK waters for its fleets, UK fishermen will no longer get special access to EU markets to sell their goods.

The MoD has said it has conducted "extensive planning and preparation" to ensure it is ready for a range of scenarios at the end of the transition period, including having 14,000 personnel on standby to support the government over the winter with the EU transition, as well as with Covid support and other events such as severe weather.

Four offshore patrol boats will be available to monitor UK waters and the MoD said it would have "robust enforcement measures in place to protect the UK's rights as an independent coastal state".

BBC economics editor Faisal Islam said the government's contingency assumptions are that a lack of business readiness will lead to queues of thousands of lorries, with Kent - which is home to the Port of Dover, operating an access permit for hauliers.

A presentation, seen by the BBC, only identified room to fast track between 70 and 100 lorries of perishable goods per day should there be tailbacks, he said.

The authorities have chosen to focus on "fish and chicks" - live and fresh seafood, often transported from Scotland to French restaurants, as well as day old chicks. No other commodities have been added to the list, he adds, raising fears among other food exporters.

The basics
Brexit happened but rules didn't change at once: The UK left the European Union on 31 January 2020, but leaders needed time to negotiate a deal for life afterwards - they got 11 months.
Talks are happening: The UK and the EU have until 31 December 2020 to agree a trade deal as well as other things, such as fishing rights.
If there is no deal: Border checks and taxes will be introduced for goods travelling between the UK and the EU. But deal or no deal, we will still see changes.

Mr Johnson chaired a meeting in Downing Street with Cabinet Officer minister Michael Gove and senior officials on Friday to take stock of plans for a no-deal scenario, a No 10 official said.

He said if there was no deal, the situation would still be "wonderful for the UK", as the country could "do exactly what we want from 1 January", even if this was "different from what we set out to achieve".