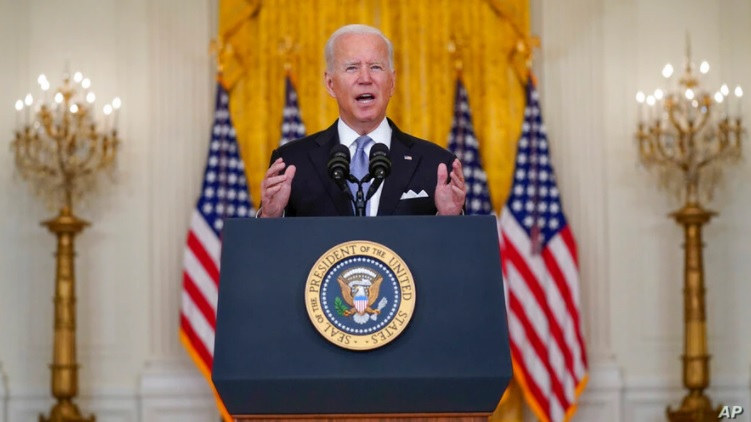 President Joe Biden speaks about Afghanistan from the East Room of the White House, Aug. 16, 2021.

America's chaotic, humiliating -- yet, at times, heroic -- final retreat from its defeat in Afghanistan will resonate for years after the last military jet lifted off from Kabul at 11:59 p.m. local time on Monday, ending the country's longest war.

The departing troops left somewhere between 100 and 250 Americans, tens of thousands of Afghans entitled to protection from former US comrades and an entire nation to their fates under fundamentalist Taliban rule -- along with an even more extreme faction of ISIS.

For them, the "forever war" is far from over.

But any sense that the US is free of consequences of a war in which it bled for 20 years is belied by the history of a country that exacts a fierce price from its former occupiers. And the trauma of the two weeks since the fall of Kabul have already left an indelible mark on Joe Biden's presidency, Washington's bitter politics and the reputation of America among its disappointed allies.

Biden can lay claim to having the guts to finally end a war that had long been lost but outlived the presidencies of three predecessors. This may resonate more widely in the future among voters than the Beltway critics of his withdrawal may appreciate. And the crush of other domestic challenges, including a worsening pandemic, could soon redirect the rare spotlight from what was until a few months ago often referred to as the "forgotten war."

But the pandemonium of the US retreat -- a humbling exercise that confounded everything Biden promised about a stable, honorable US exit -- stained the aura of competence he sold to the country in the last election and raised questions about his leadership, candor and capacity going forward to quell the nation's multiple crises. While his defenders claim he was being unfairly blamed for two decades of strategic failures in Afghanistan, the President surely authored his own postscript of incompetence and didn't predict the shockingly rapid collapse of the Afghan state and army.

The President will try to spin his own favorable retelling of the end of the war in an address to the nation Tuesday afternoon. But it was perhaps telling that he left it to Gen. Kenneth "Frank" McKenzie, who heads US Central Command, to announce the end of the war, and for Secretary of State Antony Blinken to address how the US would still seek to rescue the remaining Americans left behind. Biden, seeking to repair a self-styled reputation for a steady pair of hands, instead sat in front of a bank of TV monitors earlier in the day as he corralled local officials who were dealing with the aftermath of Hurricane Ida.

The coming Washington showdown over the war

Biden's Afghan miscalculations, which left US troops relying on their 20-year enemies in the Taliban to secure the evacuation and effectively led to the deaths of 13 US troops in a suicide bombing last week, allowed Republicans to build a narrative of haplessness and neglect they will drive into the midterm elections next year.

The GOP charge that Biden left Americans behind could be an incendiary one, given that their chances to leave freely and safely seem remote under the Taliban. And the risks inherent in Biden's promised "over the horizon" anti-terror strategy were highlighted by the deaths of a young Afghan family this weekend in a US strike on what the American military insisted was a vehicle bomb destined for Kabul airport.

Yet the last few weeks also showcased the hypocrisy of the Republican Party, which ignored its complicity in ex-President Donald Trump's deal with the Taliban, a folding that set the stage for the current debacle. The usual torrent of misinformation pumped out by conservative media -- as US troops were stationed on a dangerous foreign battlefield -- showed that the threat to truth posed by the previous presidency is far from passed, and is the latest sign that Biden's pleas for national unity will go unfulfilled.

GOP lawmakers who excused and enabled the former President's historic assault on democracy demanded Biden's impeachment or resignation. And Trump's own staggering incoherence over the war he boasted about forcing Biden to end shone through in a statement Monday in which he appeared to suggest the US should reinvade to recapture hardware already destroyed by the military.

The heroism of fallen troops
But the retreat also showcased US might.

That last departing US jet followed scores of previous flights that lifted more than 123,000 Americans, Afghans and citizens of allied nations out of Afghanistan, in an extraordinary operation that seemed impossible only 10 days ago after the collapse of the Afghan government.

The 13 US troops who died in an ISIS-K attack perished while giving Afghans and their descendants a chance of life in the US and elsewhere, which will play out over generations.

Biden's legacy however now risks being damaged by events beyond his control. Not least the fact that when he marks the 20th anniversary of the September 11 attacks next month, the Taliban -- hosts of al Qaeda in 2001 -- will celebrate their renewed control of a failed state again rife with terrorists.

There's an argument that Biden was simply cutting US losses and preventing more bloodshed, heartache and agony by finally ending the war.

But Afghanistan's rewind moment also leaves a terrible question likely to be even more acute in coming years if it again emerges as a threat to US security. After the deaths of 2,461 American troops and civilians, more allied soldiers and many more Afghan civilians, what was it all for?

Biden's missteps
In the East Room of the White House on July 8, Biden reported to the country that the US drawdown was "proceeding in a secure and orderly way" and noted that because of the way the withdrawal was managed "no one -- no one, US forces or any forces have ... been lost."

By setting this standard for the operation, the President penned himself into a political corner. His harrowing ordeal in the same stately room last week, after the suicide bombing that also killed dozens of Afghans, shattered a White House attempt to spin the withdrawal as a victory. The deaths of the US troops means that any political gloating that Biden might have been tempted to do over ending the war would now seem in poor taste.

Even before last week, Biden's conduct had revealed an unflattering side of his character. He declared the buck stopped with him for the chaos after the fall of Kabul, but actually dumped blame almost everywhere else. The depictions of a smoothly running evacuation in Kabul were exposed as false by eyewitness reports of journalists there, including CNN's Clarissa Ward. The President seemed indifferent to the plight of Afghans who had risked their lives as translators and in other positions for US forces and diplomatic efforts.

The reputation of a leader who ran on compassion and always leveling with Americans will take some repairing.

Biden's defenders also have a point that many pundits who criticized the President were former generals and officials whose own strategic failures had led to the war earning the epithet "forever." But the charges that all critics of the withdrawal effort were war hawks proved that media misinformation is not the exclusive sin of the right.

Awaiting the judgment of history
The coming weeks are likely to offer an even more unflattering account of Biden's failures than the one that happened in real time. Even Democrats on Capitol Hill seem to have some interest in finding out what went wrong. Biden's recent comment that chaos was inevitable in leaving a war is not only not credible, but it also directly conflicts with his promises of only six weeks ago.

Among the key questions yet to be answered:

Biden is fortunate in the short-term that both chambers of Congress are currently controlled by Democrats. While Republicans are vowing to hold him to account, their capacity to do so in the minority is severely limited. And given the cascade of events that will unfold between now and the midterm elections, it is not clear even that a Republican-controlled House or Senate could secure punishing traction for events that will be 16 months in the past.

As time rolls on, a president's legacy becomes defined by a few key highlights, which create a kind of symbolism that exemplifies how they are remembered. For Jimmy Carter, it was the disastrous Iran hostage crisis. For Ronald Reagan, it was his call on the Soviet Union to tear down the Berlin Wall.

The role of Biden's Afghan episode will play in shaping his own place in history will depend on what happens in the coming years, and whether the deficiencies of his own leadership recently revealed are confined to the messy retreat after America's longest war or become mirrored in other crises.