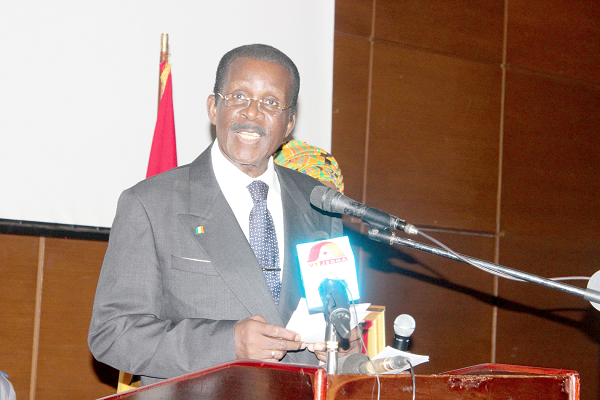 Cote d'Ivoire has been elected as a non-permanent member to chair the United Nations Security Council (UNSC).

By the election, the country will chair the council’s session in December 2018.

Other countries elected to the council include Equatorial Guinea, Kuwait, Poland and Peru.

The Ambassador of the Republic of Côte d'Ivoire to Ghana, Mr Bernard Ehui-Koutoua, disclosed this at the 58th Independence anniversary of that country in Accra.

The celebration brought together members of the diplomatic corps, ministers of state, parliamentarians and members of the Ivorian community, traditional leaders from the Ga Traditional Council and the President of the National House of Chiefs, Togbe Afede xiv.

Briefing the guests at the ceremony, Mr Ehui-Koutoua noted that Côte d'Ivoire had reaffirmed its presence on the international scene, after being elected as a non-permanent member to the UNSC.

“We also congratulate our compatriot Jean-Claude Kassi Brou on his election to the Presidency of ECOWAS where he was sworn in on July 31, 2018,” he said.

He revealed that Cote d'Ivoire, as part of expanding its international missions, had opened new embassies in Kenya and Qatar and expanded other diplomatic missions in Vietnam and Thailand.

Mr Ehui-Koutoua also used the occasion to call on Ivorian refugees to return home and support the growth of the economy, saying: “I would like to make a solemn and strong appeal to our countrymen and women still living as refugees in Ghana to return to Cote d'Ivoire and work together towards the building and development of their motherland.

“I also appeal to the Ivorian diaspora in Ghana to help us in this matter and organise themselves in order to participate in building the country within the framework of ECOWAS,” he further said.

The Minister of Employment and Labour Relations, Mr Ignatius Baffour Awuah, who spoke on behalf of President Nana Addo Dankwa Akufo-Addo, congratulated Cote d'Ivoire on its election to the UN Council and stated that “Ghana is convinced that Cote d'Ivoire will champion the cause of the West African sub-region and indeed Africa as a whole during her term in the United Nations Security Council”.

He said Ghana was encouraged by the improved security which had paved the way for the withdrawal of the United Nations’ peacekeeping mission and also created a congenial atmosphere for Cote d'Ivoire to organise several successful international conferences.