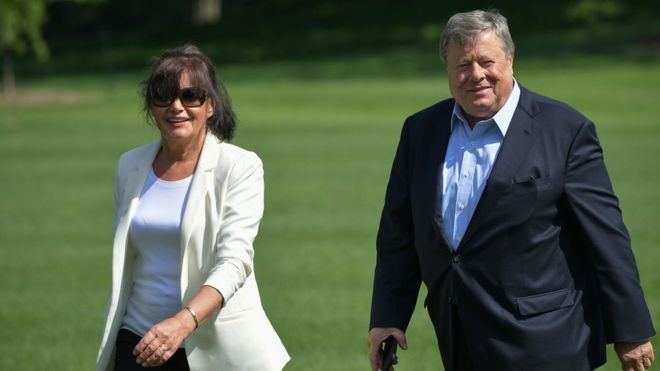 President Donald Trump's parents-in-law have become US citizens in a private ceremony.

He said the pair had been living in the US on green cards sponsored by Mrs Trump.

President Trump has railed against family-based or "chain" immigration in the past.

He argues instead for a merit-based system prioritising professionals over relatives, and has drawn criticism for his vocal attacks on immigration laws and immigrants.

Melania Trump became a US citizen in 2006, after entering the US on a coveted Einstein visa for people of "extraordinary ability" in 2001 when she was working as a model.

Under US immigration law, Melania's parents would need to have had green cards for at least five years before they could apply for citizenship.

According to the US Citizenship and Immigration Services website, an average naturalisation application in New York takes between 11 and 21 months and is dependent on numerous character and residency requirements.

Their lawyer Michael Wildes - who attended the ceremony with them - told reporters outside they had met the five year condition but refused to give more details, according to the New York Times.

Mr Wildes called family-based migration "a bedrock of our immigration process", and when asked if the pair had gained citizenship through the system reportedly replied, "I suppose".

Viktor Knavs was a car salesman in the Slovenian town of Sevnica, while his wife Amalija worked at a textile factory. Both are in their 70s.

Their son-in-law has frequently attacked US immigration laws, calling them the "dumbest laws on immigration in the world".