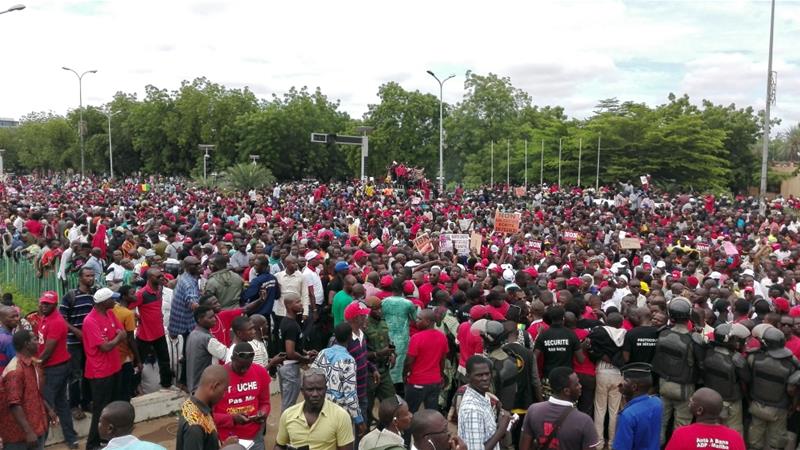 Thousands of Malians have taken to the streets to protest against a planned referendum on constitutional changes that would give extra powers to President Ibrahim Boubacar Keita, create new regions and recognise the Tuareg's ethnic homeland.

The government of Mali has delayed the vote, which was originally planned for last week, but still plans to go ahead with it this year.

Protesters at Sunday's march in Bamako, the capital, held up placards saying "no" to the constitution, with some brandishing red cards and calling on the president to resign.

Activists are unsettled by provisions that would enable the president to nominate a quarter of the Senate and remove the prime minister at will.

Malians have become increasingly disillusioned with Keita's government, as the security situation has worsened significantly over the past year and is spreading beyond the desert north to the south and centre, including Bamako.

Presidential elections are scheduled for late 2018, although Keita has not said whether or not he will run.

The constitutional changes concerning new regions are supposed to happen as part of a 2015 peace deal aiming to end the separatist Tuareg movement. It will also recognise their claims to a degree of autonomy by officially labelling the northern desert regions by their Tuareg name, Azawad.

Some Malians are angered about concessions to the fighters, whose 2012 uprising enabled allied armed groups to take over parts of the north and use them as a launch pad for regional attacks. French forces intervened and scattered the armed groups the following year.

The peace deal has so far failed to quell unrest in the north, where rival pro and anti-government factions are locked in a violent power struggle.