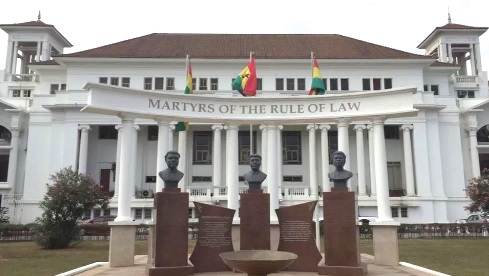 Our Supreme Court, in an early 1980 case, defined “bail as the process whereby the liberty of an accused person in custody is secured pending further investigations into the crime he is accused of or his trial for the offence with which he is charged”. {Republic vs Registrar of High Court; ex parte Attorney-General [1982-1983] GLR 407, at 411}.

Bail may be granted on a guarantee given by another person who, by standing surety, agrees to assume responsibility for the accused person’s appearance in court. Bail may even be granted on the accused’s own promise to be available for trial or other lawful process.

Under Section 15(2) of the Criminal and Other Offences (Procedure) Act, 1960 (Act 30), the police may grant bail following arrest and detention; this is called police inquiry bail.

Police inquiry bail stems from Article 14(3)(b) of the 1992 Constitution, which necessitates that a person arrested upon reasonable suspicion of his having committed or about to commit an offence and detained, shall be brought before a court within 48 hours after the arrest.

Police inquiry bail is not the only form of bail.

A court may also grant bail in three instances: before trial, during trial {Fynn vs The Republic [1971]; Owusu vs State [1967]} and upon conviction pending an appeal {Republic vs Registrar of High Court Supra}.

The grant of bail is at the discretion of the court.

But ultimately, in granting or refusing bail, the fundamental matter is whether the accused will appear to stand trial.

Section 96(6) of Act 30 provides guidelines in determining the likelihood of an accused absconding if granted bail: nature of the crime; nature of the evidence; severity of the punishment if convicted; accused’s prior bail conduct; accused’s fixed place of abode; accused’s employment; and independent, wealthy surety of good character.

Bail terms shall not be excessive. Under Section 96(3) of Act 30, the terms of bail shall be determined having regard to the circumstances of each case.

And under Section 96(4) of Act 30, a court must not withhold or withdraw bail to punish an accused.

Mr Martin Kpebu, a lawyer, played not an insignificant role in expanding Ghana’s bail jurisprudence in a series of cases he led.

In the first case, Kpebu (No.1) vs Attorney General [2015-2016] 1 SCGLR 143, the Supreme Court ruled that a surety could not be imprisoned for failure to meet the surety conditions when an accused absconded.

The old law provided that where the penalty associated with the surety was not recoverable, the surety should be imprisoned with hard labour.

And in the fourth case, Kpebu (No. 4) vs Attorney General, the valedictory judgement of former Chief Justice Sophia A. B. Akuffo, given on December 18, 2019, the Supreme Court held that the 48 hours rule mandating the police to put a detained accused before court or release him included weekends and public holidays.

Over the years, thus, the accused has had his rights, among them the right to fair trial, presumption of innocence and the right not to be unlawfully detained, safeguarded by the budding Ghanaian bail jurisprudence.

However, the fortress around our bail law still needs further fortifying.

More than a month ago, Pastor Patricia Asiedua (Nana Agradaa), the Founder of the Heaven Way Champion International Ministry, was arrested, detained and charged.

The court granted her bail.

The initial bail conditions were varied to soften its stringent terms. As of November 16, 2022, Justice Agbenorsi reported in these pages that she was still in custody because she was unable to meet even the varied bail conditions.

If Nana Agradaa, the sika gari spreader, is not fiscally robust to satisfy common bail conditions or has associates to help her do so, it leaves a lot to worry about the indigene suspect.

Failure to meet simple bail conditions have been the tragic lot of indigene suspects.

The indigene suspect is still in custody after he is granted bail because he is poor.

A bail jurisprudence that locks suspects away solely because of their poverty fits oddly with our emerging and elegant bail architecture.