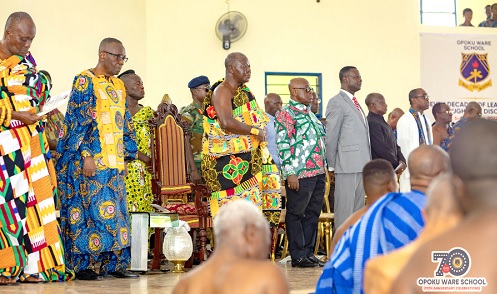 Otumfuo Osei Tutu II and the President at the thanksgiving service of the school
30.5k Shares

For almost one week, the Opoku Ware School 70th Anniversary Planning Committee, which I was privileged to serve on as secretary, had to work extra hard to cross the finishing line as the climax of our year-long celebrations beckoned on last Saturday morning with a grand durbar at the school’s new assembly hall.

When you have the President of the Republic, the Asantehene, the Chairman of the Council of State, a Catholic Archbishop, a widely respected retired Supreme Court judge, Ministers of State, MPs and a host of others coming to your school for a headline event, you simply have to pull out all the stops to make sure it is flawless by checking every little detail.

The exhaustion and numbness of body was worth its weight in gold, for it was a colourful, glorious affair.

Come evening and it was time to ease into a tuxedo for an anniversary black tie ball with the legendary Pat Thomas in attendance to treat us to some of his hits.

By the time the night was gone, my voice too had disappeared.

Having acted as MC for both events, my joints and muscles felt as if it had been pounded in a mortar for half a day by a rugged band of merry sadists, and I could no longer feel my legs as I walked – or rather waddled, more like it.

Then there was a thanksgiving mass on Sunday morning, which mercifully started at 10am, and to which I literally had to drag my weary self.

In all, it was humbling to have been part of planning toward an event which was so well-received.

If there is one aspect of Opoku Ware students and alumni that amuses or confuses outsiders, it is perhaps our school numbers, an integral part of our system.

In 1952, Rev. Fr Peter Philip Burgess, the first headmaster of the school, deemed it very necessary to come up with a numbering system for the school.

Father Burgess’ method sought a bimodal means of uniquely identifying each student; first by the year the student entered the school and secondly by the student’s turn in the registration process.

A letter of the alphabet was employed to collectively symbolise that group, and for the student’s turn in the school’s admission process a number was used.

Once a student was issued with a number, it was his forever, even if he left the school a few days after enrolling, for whatever reason, or did not ever turn up after registering. Your number cannot be reassigned.

It is part and parcel of your identity from your first day in the school, and any announcements or notices that involve a student automatically come with their numbers right after their names.

Eventually your number grows on you, as do other people’s numbers.

A visitor who turns up at the school to look for a student and cannot recall his school number will be met with blank stares.

This is because aside from evidencing which year a student is in when his number is mentioned, his house is also revealed, because students are allocated to dormitories on the basis of the last digit of their number.

All those with numbers ending in one are allocated to St. John House, for instance.

They were followed by the S, P, M, Y and A groups, all the way in the single letter generation until the Z group entered in 1975, whether by coincidence or design as the last letter of the alphabet.

The only single letter that was not used was the letter I.

There is no explanation for his preferred random allocation of the letters of the alphabet, which continued after he left the country in 1960.

In 1976, with the single letters exhausted, the school moved on to AB to continue with the numbering tradition, working its way sequentially all the way to AZ, and then moved into the B column, beginning with BC down to BZ.

The current Form One students are the CA batch.

The visionary that he was, Father Burgess, in his own small way, had dreamt up and actually implemented a simple but very effective system of a unique student identification, not just for the fun of it, but to help in effective administration.

As the Akatakyie Global President, Kat. Mike Adu-Domfeh (AB146) put it in his address during the event to wild applause, “I believe I can say without any reservation whatsoever that long before the state of Ghana thought of the Ghana card as a means of identifying its citizens, Opoku Ware School had set the pace back in 1952 with a foolproof method of identifying its students, past and present.

Perhaps the National Identification Authority (NIA) might want to consult us on how to improve its systems!”

While it obviously lacked today’s modern features of biometrics and digitalisation, the OWASS numbering system was and remains useful and fit for purpose, and clearly envisaged a need to accurately identify each one in its constituency.

To that extent, the system is a microcosm of the Ghana card in respect of its function, even if it is far more rudimentary in its outlook and features.

I have a little dream.

Perhaps there will come a time when every Opoku Ware student admitted to the school will be issued with an identity card, with his school number and vital information captured and stored biometrically therein, and with which he can access the dining hall, laboratories, libraries and other school facilities.

Further, a student caught in an infraction of school rules could then be fingerprinted and his identity and other details would be easily established, leading to better and more effective discipline outcomes.

That would certainly take a big part of Father Burgess’ dream and vision in 1952 to yet another level fit for the reality of the 21st-century and beyond.

To our 70th Anniversary Planning Committee Chairman, Kat. Nana Joe Mensah (V53), Country Manager of Kosmos Energy Ghana, and all the other members of the committee, including headmaster, Rev. Fr Stephen Owusu Sekyere, and Board Chairman, Kat. Kwasi Ofori-Kuragu (C10), a word of deep gratitude for being such amazing team players and leaders.

One could not have asked for a better set of colleagues.

May my digital dream come to pass.