How Yaw's death gave his father another malaria reality 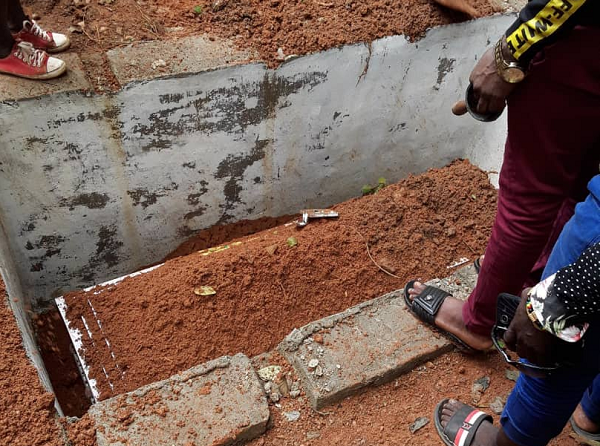 It’s been 26 years since Yaw died of malaria, but the circumstances of his death remains a daily reminder for his parents. This was more so for his father, Uncle Kobena. Anytime Uncle Kobena came across children he reckoned were his son’s age mates, his mind raced to memories of his deceased son.

Yaw was about five years when he died at the Abor clinic, a private health facility operated by one doctor Fennec, who is also deceased. The clinic, which has now been converted to a morgue, is located at the outskirt of Ekumfi Eyisam on the Accra-Mankessim road in the Ekumfi District of the Central region.

Yaw died at the clinic two days after he had been sent there for treatment. He had had a severe fever. Initially, Yaw was treated with herbal medicine at home when he first fell sick and could not eat well. Depending on the type of symptom he showed, a different herbal medicine was prescribed, but to no avail. Different people suggested different things for his treatment until Yaw’s condition worsened. His father at a point even thought it was a spiritual illness and therefore sought spiritual help. That one too failed.

Yaw therefore had to be sent to the clinic for orthodox treatment. His condition had worsened at the time he was taken to the clinic. He died on the afternoon of the second day at the clinic. It was at the clinic that Dr Fennec told Yaw’s parents that he (Yaw) died from malaria.

His death brought pain to his parents, particularly his father. This is because Yaw was his father’s second child but first son. He was my own cousin and we were of the same age when he died. Anytime I visit my parents and also visit my uncle in the same community, he tells me that I remind him of his late son.

For him, Yaw’s death changed his attitude towards malaria and self-medication in general. He recounts that if he had known earlier that Yaw was suffering from malaria, he would have taken him to the clinic earlier and that he probably wouldn't have died.

Even though it has been more than two decades, I haven’t forgotten about my son’s painful exit. Anytime I see any of his age mates, I remember him, Uncle Kobena said, trying to explain why I remind him of his late son, saying It is not possible to forget about him.

I loved Yaw so much, he said, noting that Yaw’s death left a space of unhappiness and pain in his heart.

For him, ever since Dr Fennec told him that his son died of malaria and also educated him on the disease, he has not relented on his efforts to educate others on malaria.

He tells me that he now sleeps in treated mosquito nets and even when he feels feverish, he first goes to the hospital before taking any treatment. For Uncle Kobena, self-medication is not only dangerous, it could equally lead to death.

Although my uncle (Uncle Kobena) lost a son; I lost a cousin and a play mate. Uncle Kobena may not be the only person who has lost his dear son to malaria in this manner. There are several people who have paid the ultimate price due to malaria.

For instance, Alex Mould, a former Chief Executive Officer of the Ghana National Petroleum Corporation (GNPC) lost his 27-year-old daughter Nah Densua Mould to malaria in 2020 in Mauritius. She was laid to rest on Thursday, January 30, 2020. Nah Densua Mould is said to have travelled to Mauritius on December 23, 2019, for the Christmas holidays but was diagnosed of malaria that very day and subsequently passed on January 1, 2020.

Malaria, a febrile illness, remains a major public health problem around the world, particularly in tropical regions such as Ghana. It is a life-threatening disease caused by parasites that are transmitted to people through the bites of infected female mosquitoes.

Statistics available indicates that about 3.2 billion people, almost half of the world’s population, are at risk of malaria. Young children and pregnant women are particularly vulnerable to the disease when they become infected.

Information sourced from www.hemocue.com, a health-based portal, explains that symptoms of malaria appear seven days or more after the infective mosquito bite and that the first symptoms, including fever, headache, chills and vomiting may be mild. It adds that if malaria is not treated within 24 hours, it can progress to severe illness, often leading to death.

Even though malaria is preventable and treatable, late reporting of cases at health facilities for proper diagnostics and treatment could lead to death in many instances. According to the Ghana Health Service (GHS), in 2019, malaria accounted for 42.8 per cent of Outpatient Department (OPD) cases, 22.2 per cent of inpatients admissions and 1.1 per cent of inpatient deaths in Ghana.

Many health practitioners consider self-medication as part of the reasons why many people report malaria cases late at health facilities for proper diagnosis and treatment, a situation which greatly contribute to malaria mortality in the country.

Self-medication is a common practice in many developing countries, including Ghana. It has been defined by the World Health Organisation (WHO) as treatment of self-diagnosed disorders or symptoms by use of medicines or intermittent/continued use of medicines prescribed by physician for chronic or recurring diseases. Other health journals also define self-medication as treating an illness or any other common health problems without consulting a doctor or medical supervision.

Given the easy accessibility and availability of over the counter drugs services coupled with poor access to health care services in Ghana, the practice of self-medication is quite common, particularly regarding malaria treatment.

It is important to mention that the idea of self-medication even for small health issues can lead to complications. This is because what we do not realise is the fact that opting for self-medication makes us prone to allergies, drug-dependence, and even addiction.

Sadly, many people engage in self-medication without thinking about the negatives— they don’t even check the composition of the medicine and are clueless about the side-effects of these drugs on their body.

Sharing her experience on how people self-medicate with regard to malaria treatment, a Dispensing Officer at a pharmacy shop at Amasaman who preferred not to be named, said "People usually walk in here to buy malaria drugs without prescriptions. And in fact, there are times some just come to ask us which drugs are good for malaria treatment.”

The source added "But you see, you just can't start taking malaria medication without knowing your status, so I often advise them to take malaria test before commencing treatment.”

Alberta Oteng, a one-time self-medicated patient, who recounted her experience with Graphic Online said, "I started taking malaria medication based on an advert I heard but my condition persisted. When I felt so weak after taking the drugs for some days, I went to the hospital and unknown to me, I was diagnosed of typhoid fever instead of malaria."

For Alberta, self-medication could be fatal especially when you are taking drugs meant for different ailments, saying "I could have died from the typhoid, thinking it was malaria."

Speaking on the subject, Dr Richmond Amo, a Clinical Pharmacologist and a part-time Lecturer at the Faculty of Pharmacy and Pharmaceutical Studies at the Kwame Nkrumah University of Science and Technology (KNUST), described malaria self-medication as a “dangerous practice” which could potentially lead to death.

For him, because malaria is a common disease in Ghana, people do not see it as a dangerous disease that could result in major clinical complications.

He pointed out that anti-malaria drugs are not just administered to people on the basis that they have malaria but other clinical issues specific to the patient are considered before deciding on a particular type of anti-malarial drug to be given.

Dr Amo, who is also a Medical Officer at the KNUST hospital in Kumasi, explained that “we have different categories of patients with different physiological states” and so the patient’s clinical history is taken to enable medical officers to prescribe the right medications and treatment.

He further explained that administering wrong anti-malaria drugs to a patient without properly identifying their clinical history could lead to other compilations and in worse situations, death.

He said, for instance, in treating malaria in pediatric patients, the child’s weight is one of the major determinants of the dosage of drug to be given and so people cannot just buy anti-malaria drugs someone used for his or her child because it worked for that person.

“You cannot use somebody’s case to give the same drug and dose to your child,” Dr Amo noted, stressing that wrong dosage, whether high or low, will have an effect on the child’s health.

He said, “Pediatric patients’ drugs are given based on their weight,” cautioning that in the case of expectant mothers, not every anti-malaria drugs could be administered, particularly when they are in their first trimester.

The Medical Officer explained that in treating malaria, health practitioners consider the number of parasites in the patient’s system which guides the mode of drug administration; whether to use oral administration, injection, or intravenous medications

For Dr Amo, it is not right for people to walk to pharmacy shops to buy their own anti-malaria drugs without knowing whether such drugs are good for them or not.

He has, therefore, advised the public to desist from self-medication, particularly with malaria treatment and instead go to the hospital when they suspect they have malaria so that they can be tested and right medication prescribed.

Contributing to the issue, the Programmes Manager of the National Malaria Control Programme, Dr Keziah Malm, said self-medication could result in adverse drug reactions, dangerous drug interactions because of improper medical assessment before taking the medicine.

She explained that the practice could lead to severe illness or even death when other diseases are missed, and that it could also lead to antimalarial medicine resistance.

“For instance, self-medication with wrong antimalarial (SP) can lead to development of resistance of the malaria parasites. Drug resistance to antimalarials is a major concern globally,” she explained, adding “This happened with chloroquine, leading to the need for Ghana to change our first-line treatment from Chloroquine.”

Dr Malm has, therefore, advised the public to desist from self-medication, saying “They should seek treatment from approved and appropriate medical personnel and medical facilities.”

“We risk developing severe malaria, and dying from it, or missing other illnesses when we self-medicate,” she noted, pointing out that “Self-medication may come with adverse effects that could leave us with other chronic ailments, make us disabled, dependent and consume further our financial resources.”

The NMCP boss expressed the worry that if the practice is not stopped, it will surely hamper the achievement of the objectives by the NMCP, which among other things, include to ensure that all persons suspected to have malaria get tested before receiving treatment, all persons seek treatment for suspected malaria promptly, all persons obtain appropriate treatment for malaria; and that malaria parasites do not develop resistance to the country’s malaria medications.

In his view, the Executive Director of RISE-Ghana, a Bolgatanga based Non-Governmental Organisation (NGO) with focus on health and governance, Mr Awal Ahmed Kariama, the Food and Drugs Authority to enhance their surveillance on the sale of drugs at unauthorised places such as lorry parks, markets and open places where people go to buy such drugs for self-medication.