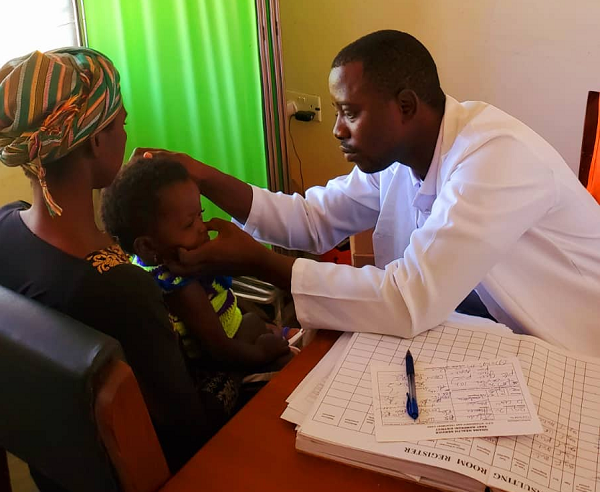 Early and accurate diagnosis either by microscopy or Rapid Diagnostic Tests (RDTs) has been recommended by the World Health Organisation (WHO) globally for all patients with suspected malaria before they are given treatment.

This diagnosis is essential both for effective management of the disease, and for strong malaria surveillance as it reduces the illness and death by enabling healthcare providers to swiftly distinguish between malaria and non-malaria fevers.

It also improves the overall management of patients with feverish illnesses and may also help reduce the emergence and spread of drug resistance.

However, the inadequate supply of the malaria RDT kits to health facilities in rural communities in the North East Region is posing risk to patients as some healthcare providers in the region treat malaria cases without testing. They, instead, treat patients suspected of malaria based on available symptoms.

The practice is very common in most CHIPs and health centres in the North East Region as these facilities do not have the capacity to use microscopy, but only use the RDT kits for testing malaria.

Checks by the Graphic Online revealed that due to the absence of the test kits, some health care providers in the rural communities treat malaria based on symptoms, while others often direct the patients to buy the kits from chemicals shops for them to be tested or be referred to bigger facilities.

When this reporter visited the Dagbriboari, Gbimsi, Duu CHIPS and Sakogu health centre, it was observed that some of the facilities had not been supplied with the test kits since October 2020, whereas others have not had some since July in the same year.

The Malaria RDT kits are supplied free to the various health facilities by the Regional Medical Stores and when it is finished, health care providers are expected to make a request for re-stocking.

But, according to some health care providers, even when they make request, they don’t get the kits as the medical stores sometimes run out of stock.

“Currently we don’t have RDT kits which is making malaria treatment very difficult. Since last year, we have not had RDT kits we made request for… we have not received some. So, we treat based on signs and symptoms and sometimes we refer patients to bigger health centres for treatment,” Mr Anas Hamza Assadullah, a nurse in-charge of the Dagbriboari CHIPs told Graphic Online.

According to him, treating based on symptoms was very risky because some diseases present similar symptoms as malaria, and if care was not often taken, a wrong medication could be given.

In the absence of the test kit, if a patient is unable to afford it at the pharmacy, the only alternative for the health care givers was to treat based on the symptoms that the patient presents.

Another Nurse at the Gbimsi CHIPS compound, Ninmoa Ben John said “someone will present a complaint and we keep wondering whether it is malaria or different case; so to confirm, we let clients buy the test kit outside and come”.

He added that the quantity of kits supplied to the facility anytime they made request was not able to sustain them for even a month due to prevalence of malaria cases in the area.

During a recent visit to the Sakogu health centre in the East Mamprusi Municipality, this reporter spotted a woman at the facility who had brought her daughter to the facility with suspected malaria.

Due to the absence of the RDT kits, the 34-year-old woman was directed to a nearby chemical shop to buy the test kit but she could not afford.

Looking dejected and frustrated, Mrs Asana Salifu in an interview said she was not having any money with her to purchase the kit for the test to be conducted on the child. The test kits cost GH¢5.

When contacted, the North East Regional Malaria Focal Person, Mr Mark Abugri attributed the shortage of the kits in some facilities to the supply cycle, explaining that the Regional Medical Stores supplies to the facilities on monthly basis and if the kits supplied were finished before the time frame, nothing could be done about it.

“We make request for our facilities on monthly basis and all facility heads are expected to make their request on the District Health Information Management System (DHIMS) but some of them don’t do that, and if that happens, it is very difficult for us to make a request to the medical stores,” he explained.

He added that “sometimes we don’t get from the medical stores because of shortage and until they supply to us, we can’t distribute to our facilities”.

Asked whether it was advisable for health care givers to resort to treatment based on symptoms, Mr Abrugri who is also the East Mamprusi Municipal Director of Health Services, admitted that it was not a good practice because the “global standard is to test before treatment”.

He, however, said in extreme cases where patients present complaints of suspected malaria and there were no RDT kit, it was an option to attend to the patient.
Malaria cases

Malaria remains the main threat to public health despite decades of control efforts made. It is a devastating disease that threatens productivity and economy, particularly in malaria endemic countries.

Though, Ghana over the years has made considerable gains in the fight against malaria using the targets set in the National Strategic Plan (2014-2020) of reducing morbidity and mortality by 75 per cent by 2020 with 2012 as baseline, but the incidence continues to be prevalent especially in rural communities.

Checks at some health facilities revealed that it accounts for 30 percent of outpatient attendances and 23 percent inpatient admissions. For Instance, in the Gambaga Health Centre which is one of the major referral centres in the North East Region, it recorded 413 malaria cases from January to June, 2020, as against 320 cases recorded within same period in 2019.

Mr Abugri said through the National Malaria Control Programme (NMCP) and other interventions, the region was making inroads in the fight against the disease.

On whether the outbreak of COVID-19 had not interrupted the fight against malaria, he said, there was no cause for alarm because the Ghana Health Service and its partners were not relenting on their effort to fighting malaria in the midst of the COVID 19.

Without testing, it is virtually impossible for health care providers to distinguish the disease the patients have as some of the diseases have similar symptoms and one or the other disease may be overlooked, leading to more fatalities.

Like malaria, COVID-19 tends to begin with a fever, difficulty breathing, fatigue and headache. In the urban areas, diagnostic tests for both illnesses would be available to anyone experiencing symptoms.