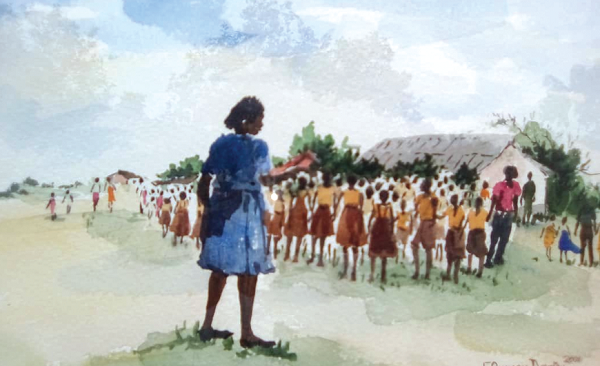 As the COVID-19 pandemic still lingers and war rages on in Europe, global society with bold determination is going about doing what it knows best: living and celebrating life.

March has come to be established as the month for Ghana. So on different fronts and in diverse ways, our achievements in the various branches of the arts are also being fervently marked, both at home and abroad.

Recent seasons in some of the world’s well-known art auction houses such as Christie's, Phillips and Bonhams have witnessed the giant strides being made by some contemporary Ghanaian artists.

The works of established names like El Anatsui and Ablade Glover, as well younger guys like Amoako Boafo and Serge Clottey, continue to confound experts in terms of their going prices.

The reality is that there has been an energetic surge of interest in contemporary Ghanaian art, with astronomical sale prices in auction houses globally.

They were, among other things, highly regarded as master water colourists. Each had a distinctive style that cannot be mistaken. The works of those pioneering artists have sobering and enduring appeals that cut across generations.

As we celebrate 65 years of political independence, it’s worth doffing our hats to them for the vital wealth of artistic treasure they created for the world.

They have endured and will endure as artists highly touted in the Western world the way David Hockney, Andy Warhol, Jackson Pollock, Thomas Gainsborough, Joseph Turner and Jean-Honore Fragonard have endured.

Amon Kotei hailed from La in the Greater Accra Region. He studied at Achimota College and the London School of Printing in the United Kingdom (UK). Many know him as the designer of Ghana’s Coat of Arms, but his abilities as an artist went far beyond that.

In the catalogue for the Pioneers of Contemporary Ghanaian Art exhibition held at the Artists Alliance Gallery at La some time ago, Amon Kotei was described as “an outstanding artist whose ingenious expertise in applying the right combination of complimentary and/or contrasting hues to paint images of well-endowed female figures is legendary.”

His women were often portrayed in pensive or reflective moods, which appeared to be a deliberate attempt by the artist to shed light on many of the qualities of Ghanaian women as serious, hardworking, thoughtful and caring people.

This can be seen in Kotei’s paintings such as ‘Overlooking The Village’, ‘Deep in Thought’ and ‘Mother and Child.’

Philip Amonoo was an all-round artist who did well with water colour, pastel, oil painting and collage works. He was particularly praised for his outstanding water colour skills which stood him out as an icon in that field in Ghana.

His works were shown in places such as the United States (US), the UK and Italy. Amonoo, who designed the crest of the University of Cape Coast, taught art at the Winneba College of Education and was in the early 1970s, part of a group of artists called Tekarts, which held annual shows in Winneba and Accra. The Tekarts collective included El Anatsui.

Prof. E. K. Tetteh, perhaps the most experimental of the four artists under consideration, specialised in watercolours but was equally good at oil paintings and prints.

He displayed a fondness for blissful village scenes. A considerable amount of his works was also Bible-inspired.

Artist from the mountain

Emmanuel Owusu Dartey was from Mamfe Akwapim in the Eastern Region. He studied at the then Kumasi College of Technology and the Rhode Island School of Design in the US. A former Head of Department (Painting and Sculpture) at the Kwame Nkrumah University of Science and Technology (KNUST); he was said to have encouraged experimentation and artistic courage in his students.

Owusu Dartey specialised in capturing the vanishing idyllic scenes around Mamfe and Nsawam, both in the Eastern Region. In his pieces, one cannot help admiring the careful attention to clouds and shadows.

The generally soft tones he employed created vivid impressions for anyone familiar with weather conditions on the Akwapim Ridge.

His near-abstract item titled ‘Misty Day’ strikes the viewer as an efficient painter’s masterful take on fog or low lying clouds, a common phenomenon in our mountainous spaces. His beach scenes also show beautiful coastlines gradually becoming extinct due to pollution of all sorts.

Lord Duveen of Milbank considered the greatest art dealer and benefactor of art galleries in history and who was behind the collections of wealthy art lovers like H. E. Huntington, J. P. Morgan, Randolph Hearst, Andrew Mellon and a host of English royalty in the 1920s, once said: "You can always make more money, but if you miss this picture, you'll never get another like it, for it is unique."

What can be said of all the revered artists Lord Duveen dealt with can be applied to the Ghanaian masters. The works of greats like Amon Kotei, Owusu Dartey, Philip Amonoo and E. K. Tetteh are indeed unique and rare.