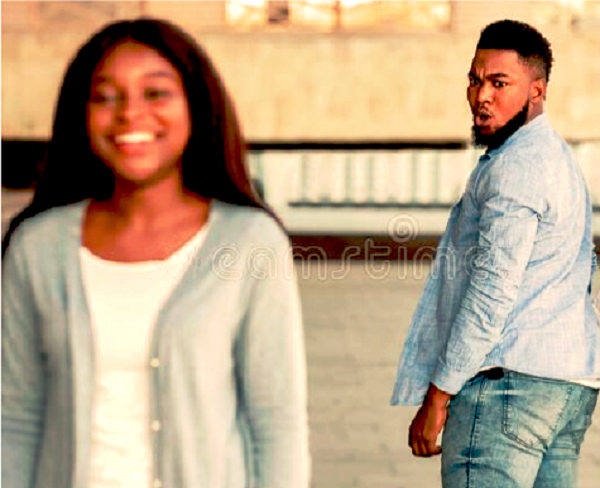 The second look, whether mentally or physically, can be slippery and deadly. Follow @Graphicgh

Jackie saw what happened, but she couldn’t reveal it in public to the police. Her father’s driver, who was driving her to the hotel where she worked, did something that caused the accident.

It was a morning rush hour and the traffic had slowed down. As a smart-looking lady passed in front of Jackie’s Toyota Yaris, the driver turned and watched her.

And, yes, even Jackie noticed that the cute lady was the type who turned heads. The driver, unable to resist it, turned a second time and looked.

On the second look, while his eyes were glued to the lady walking away, the driver drove the Toyota Yaris into a Honda Accord, smashing the tail lights.

Jackie saw what happened, but she couldn’t say it. She left the driver and the police to sort things out and took an Uber to her work place.

Jackie had been working in the hotel lobby desk long enough to observe some nasty scenes. As an only child of her parents, she received a strong God-fearing upbringing that made her recognise nastiness when she saw one.

While her mother was a lady-pastor, her father was the founder of The Second Look, a non-governmental organisation that helped Christian leaders who struggled with pornography and sex-related perversion.

One day at the hotel, Jackie encountered one of those nasty scenes that led her to quiz her father about the ministry of reaching out to sexual perverts among Christian leaders.

Her first guest that morning was a man he knew from church as the elder in charge of the youth service. He was also a politician.

The guest did not recognise Jackie and she did not identify herself. She noticed, however, that the man had disguised himself. He wore a hat and dark goggles, but Jackie recognised his mustache.

“Is your luggage in the car?”

“No luggage,” the guest snapped. “Just check me in.”

Jackie’s antennas shot up, but she had no business wondering why his church elder wanted a night’s hotel accommodation. She checked him into Room 245.

The following morning, a room attendant, whom Jackie had befriended, said to her, “Do you want to see things?”

When they arrived at Room 245, Jackie scrutinised the ruffled bed sheets. Then she saw a pornographic magazine, several used condoms, two empty bottles of dry gin, and a pack of aphrodisiac capsules.

“Why are you showing me this?” Jackie asked her friend. “You’ve probably seen worse things.”

“Yes,” the attendant said, “but I know the man who checked into this room yesterday. He and his wife preach in our church regularly.”

Jackie only nodded and walked out, wondering why the guest and his partner did not clean up their mess.

At home in the evening, Jackie told her father about his driver’s second look that caused the accident. Then she informed him about the guest in Room 245.

“You sound surprised, my dear,” her father said.

“And shouldn’t I be, dad? That guest is our youth elder!”

“I know. Listen, Jackie, that is the reason for my counselling ministry which is targeted specifically at Christian leaders. Many are helplessly in the grips of sexual slavery and need to be delivered.”

“I don’t get it, dad,” Jackie moaned. “Isn’t the power of their faith able to help them resist the temptation to get into such mess?”

“Yes, of course,” father said. “But remember David the king and the mess he got himself into.”

“The second look—that was his problem. The king shouldn’t have turned to look at the bathing woman the second time. The second look, whether mentally or physically, can be slippery and deadly.”

“That was what happened to the driver in the morning,” Jackie noted.

While Jackie remained speechless, her father continued, “There are many who are living clean and moral lives due to their faith. Remember Joseph in Potiphar’s house who said “No” to advances made by his master’s wife! There are many Josephs in our day.”

“And many Davids too, father!” Jackie observed. As she strolled towards the living room, her father said, “Every man should do what Job did.”
Jackie turned to look at her father. “What did Job do, dad?”

“He made a covenant with his eyes—not to look lustfully at a woman! That way he avoided the second look that often lands men in sexual immorality.”

The writer is a publisher, author, trainer and CEO of Step Publishers.