Last week, Mike Adjei died in a London hospital. My mind has been flooding with memories from the many years that I have known him as a colleague, as a friend, as a neighbour, as a political comrade-in-arms, and as the father of my Abyna Ansaa, aka Madame.

I first got to know of Yeli-Yeli in the pages of the Commonwealth Hall paper, Echo. He was at the time the most regular and incisive writer in that Hall paper and everybody on campus waited to find out what he had to say on any subject and Volta Hall held her collective breath for his attacks on female students.

Yeli-Yeli was the pen name under which Mike Adjei wrote articles. He was in his third and final year when I came to Legon in October 1964. It must have taken some courage for me, a first year female student in Volta Hall to have decided to write a rebuttal to two of the articles written by Yeli-Yeli.

I now can’t even remember what the subject matter of one of the articles was, but one was about the female students wearing wigs and some other fashion item that he took issue with. Since I wasn’t one of those who wore wigs and I was certainly not counted among the fashionistas on campus, what I wrote was not personal, but I felt Yeli-Yeli was terrorising the female students unnecessarily.

We can say our first meeting did not set anything on fire. After Legon, Mike went to the then Graphic Corporation as one of the first university graduates in that institution. When I joined the Graphic two years later, he had just left for a Master’s course in Communications at Columbia University in the USA.

He came back to the Graphic and we decided we were on the same side and should collaborate and we became cagey friends.

He might have left Graphic but he did not leave writing, which was easily his first love, and every time there was an issue of public interest, Mike will write an article and leave no one in any doubt about where he stood.

In the meantime, we had become neighbours on Soula Loop at North Labone, where a shortish hedge separated number 14 from number 16 and our two households were in and out of each other’s houses at all times of the day and night. 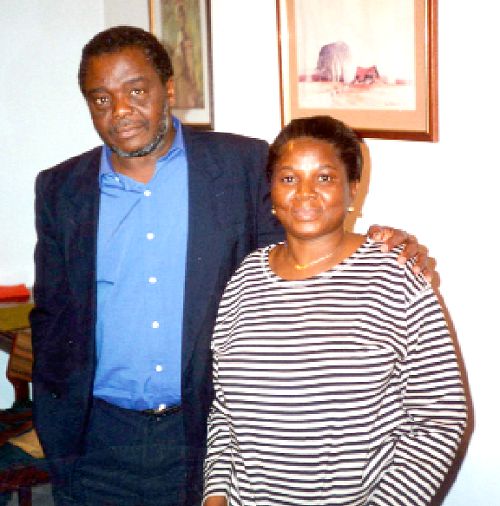 Mike Adjei and Elizabeth Ohene in their adult days

A thief once broke into my house in the middle of the night, and when I screamed, it was Mike who rushed in holding a garden rake, obviously the first implement he saw when he got up on hearing my screams. Luckily for us all round, the thief had taken to his heels by the time Mike got in with his rake.

He and Goody had Kobby, Abyna Ansaa and Nii Okine in quick succession and with my Koranteng, a happy band developed on Soula Loop as the backdrop to the political upheavals of the 1970s.

There were a number of sacrosanct things in Mike’s life that you had to treat with great respect if you wanted to be on his right side: Mfantsipim School, he was MOBA 1959, and Larteh; he loved Larteh with a passion that was palpable.

The street on which we lived was an interesting one and Mike was to write a chapter on it in his seminal book, Death and Suffering in Rawlings’ Ghana. But before then, we tried to do our jobs, cope with the shortages of the time, send our children to school, get into political arguments, we agreed Kutu Acheampong was bad news for the country.

By 1978, nobody could pretend to be neutral in Ghana; an association of professional bodies had emerged, Kutu was shunted aside, then in 1979, everything happened, May 15, June 4, the executions, elections that Victor Owusu lost, which was the way we put it, rather than elections that Hilla Limann won.

When it had all settled, Mike asked me one day to take him to Victor Owusu and I did. It is worth emphasising that by this time, Victor Owusu had lost the election and did not have anything to offer anybody.

Before long, Mike had taken charge of Victor’s political office. He first tackled the sack load of letters in the corner and within two months, they had all been replied and he had set up a system for all letters and requests to be seen to.

He was still writing the odd article to be published in the newspapers and worked at GOIL, but he was becoming more and more overtly political.

Then 31st December happened and a few days later, I had to leave Ghana in something of a hurry. Mike took me to the airport and walked with me through the various checkpoints until we reached the last security checkpoint and got into trouble with a capital T.

He stayed with me until I manoeuvred my way through to safety and into the plane and he took a mental picture of the heavy-set woman who had tried to stop me.
Years later, Mike saw her in London. She said she was in exile and he told her revolutions have a habit of devouring their own!

But I’m getting ahead of myself. Mike predictably got into trouble with the Provisional National Defence Coucil (PNDC) and was detained at the Nsawam Prisons for months. When he was released, he made his way to Nigeria and eventually got to London and into what was to become a long period of exile.

One could not say he ever settled down, his heart was in Ghana. He couldn’t get over what he saw as the absurdity and unfairness of the members of the ruling party that had been overthrown being the main beneficiaries of the coup and playing prominent roles in the PNDC and the opposition people being in exile.

Victor Owusu was now in London and in failing health and each time Mike saw him, his condition fuelled his anger against the authorities in Ghana. The last time I saw Victor Owusu, it was Mike who took me to the house. It was very touching to see him being so protective of the man he used to hold in such awe.

He expended some of his frustrations in getting the material to write his book, Death and Pain, Rawlings’ Ghana — The Inside Story and he wanted everybody to read it. When he attended New Patriotic Party (NPP) meetings in London he could barely hide his exasperation with what he saw as our pathetic attempts to try and win an election in a “permanently rigged structure”.

The 2000 election results came as a huge, even if pleasant, surprise to him and he arrived back home a much relieved man.

I had been appointed Spokesperson for the Government and a Minister for Media Relations. Mike came to tell me that since his arrival many people were telling him he should work with me, but he had no intention of doing so. I hadn’t asked him and he was telling everybody I wasn’t his friend and it was my brother Sammy who was his friend.

Well, I was glad to have that denomination since my relationship with him had also been transformed; he was the father of my Abyna Ansaa and her siblings and not my friend. Whichever way you looked at it, we couldn’t get out of each other’s way. President J.A. Kufuor appointed him a presidential aide and we worked together in the Castle.

When the NPP lost the 2008 elections, he drifted back to London and would spend the warm months there and come to Ghana and his beloved Larteh during the cold months.

It was in August last year that word came suddenly that he had fallen ill and Abyna Ansaa took off to go and look after him. Since then, she had showered him with a lot of love and devotion, far more than anybody has in a lifetime.

I saw him in hospital early October and he was fading away. “Do you know who this is that has come to see you?” Abyna asked him. “Of course”, Mike said in his gravely voice, “Grandmother”, he smiled and I smiled. I think we were back to being friends.

Yeli-Yeli, Avunculus, Mike. If I have any regret, it is that he did not hold on till he got back to Larteh.