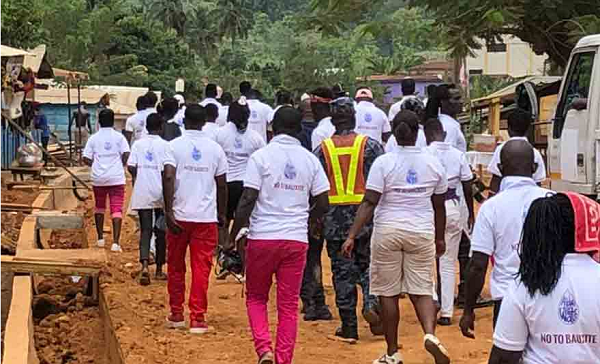 Residents of Atiwa at the start of their walk to the Flagstaff House
30.5k Shares

Last week was intriguing. Two incidents happened in the country which saw a group walk from Atiwa in the Eastern Region to the seat of government in Accra and another to Parliament House, both demanding their right to be heard on matters affecting the national interest.

The group from Atiwa had embarked on a six-day walk to the seat of government in Accra in protest against bauxite mining at the Atiwa Forest.

The second group, a political group, stormed the House of the Legislature in protest against the ratification of the Ghana-US military cooperation pact. Similarly, there were reports of some residents in Takoradi expressing dissatisfaction with the government for its inability to fulfil a campaign promise to relocate the headquarters of the GNPC to the Western Region. Rather, the GNPC has announced the construction of a new headquarters in the capital, Accra.

The actions of the two groups and the residents are all geared at influencing national policy decisions of the government.

If our political parties, the Members of Parliament (MPs) who are the people’s representatives, and the government are failing the citizenry, then the citizenry will have no choice but to step up their citizen-driven demands to construct their way into the governance process and thereby fill the yawning gap of meeting the people’s needs.

Already, President Nana Addo Dankwa Akufo-Addo has encouraged the Ghanaian citizenry not to be spectators in the governance process. This, in his view, will not only help to build a strong civil society for good governance to prevail but spur development growth as well as lift the general standard of living of all Ghanaians.

In Ghana, enforceable rights such as rights to a decent shelter, jobs, health care, education, food, among others, are loose and yet the citizens are mute and do not ask the relevant questions from policy makers.

What accounts for this low level of citizen participation in the governance process can be multiple. Could it be blamed on extreme partisanship, illiteracy, ignorance and political naivety?

In any emerging democracy, the citizens are expected to and should play a more functional role in the good governance process and feel that all development  activities performed by the government (and for that matter the political class) are for them and it is their right to ask questions and own it for the public good.

It is always good for the citizenry to keep an eye on the public purse and the right management of state resources.

This is an important question that needs to be asked and answered if the President’s call on Ghanaians to be citizens and not spectators is actualised for good governance principles to prevail.

Currently, all is not well with the economy of Ghana and the citizens  must get involved in finding the right solutions to fix the ailing economy.

If the citizens continuously fail to ask the relevant questions bordering on their needs and demand the right answers, we cannot guarantee a sustainable development growth.

Through such actions, the nation can build a strong civil society where the citizenry through their participation can contribute their quota to the national development efforts.

Going into the Fourth Republic, which is already 25 years old, are we going to expect more citizen-driven demands?

In the past years we have had some demonstrations, some of which have gone sour and fatal, and petitions have also been sent to the government for consideration in their policy-making decisions.

Frankly, citizen-driven demands need not go sour and end sometimes in fatalities. The reason being that the ultimate purpose of increasing the awareness of the citizens of their active role and participation in national matters will go a long way to promote good governance.

Conversely, the absence of it can equally undermine good governance and democracy. Indeed, it will be difficult to talk about the power of the citizenry if their voices, ideas and perspectives are not factored or considered in the political arrangements.

It is important to state that a direct citizen participation in the governance process can go a long way to enhance government’s development efforts, policy, programme and project formulation, reformulation, implementation, monitoring and evaluation.

In all of these it is important to develop and deepen the process of decentralisation as a good option to increase citizen participation in the governance process. Public education is also crucially important. With better education, people's voting preferences might have better basis.

There is also the need to strengthen the relationship between the government and the public.

Unless the citizens have more chances of effecting policy-making decisions, a functional democratic society cannot take place without the guarantee of individual liberties and rights.