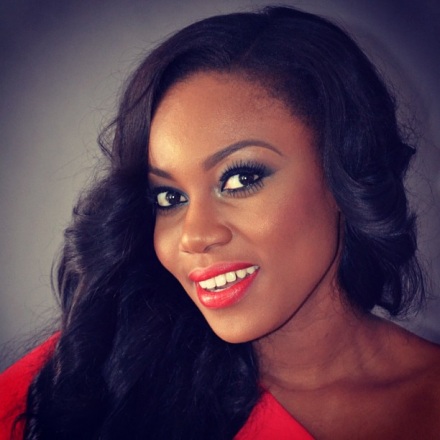 The 27 year old tweeted that, “So just because he mentions my name in a song, that means I'm Dating him?? #weakLOGIC you can do better than that.....LOL”

Dammy Krane is signed to 2Face Idibia’s Hypertek Digital and in his latest song titled Really Love You, he declared his love for the Ghanaian actress. The song was released on Wednesday, May 8.

In the song, Dammy says "Senior broda mi Johnson. Sey you know my taste. Shomo Yvonne Nelson. I no just want Ur Waist, because...I do, I do really love you.”

Not long after the song was released, Yvonne took to Twitter to express her joy for the fact that Dammy had given recognition to her in his new song; a confirmation that the two have a thing together.

She wrote on Twitter that: “He really loves me and its not just the waist....hehehehehehehe. Awwwwwww.... Cute......@dammy_krane *hugs got me smiling. *nice song”

However, after her tweet seemed to have flamed the rumour of her alleged relationship, Yvonne tweeted again saying: “Its like Peeps wake up in the morning guessing and deciding who Yvonne Nelson is dating.......absurd.”

Only last month, Yvonne Nelson posted a video of herself and Dammy together on social media site Keek. However, the sultry actress explained in another tweet that “I'm a very jovial lady,,,my keeks are proof....I have keeks with Majid,John,Dammy etc. They are sweet and adorable guys.love them”.

Although Dammy Krane is yet to respond to the rumours, he tweeted today saying: “Yvonne is one of D sweetest ladies i knw...nd peeps shdnt say or write piss-takin stuffs abt her....Make she rest na...”