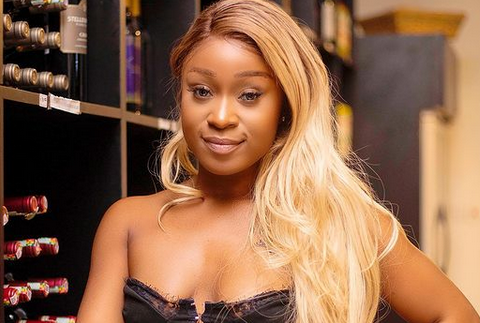 Since she became a known face in the entertainment industry, actress/video vixen Efia Odo has been mired in one controversy or another and it seems she and trouble are bedfellows.

However, she has told Graphic Showbiz that her issues are because Ghanaians simply don’t understand her.

“I think Ghanaians are hypocrites, they are okay with comments of other celebrities in Ghana and abroad and even how they dress but they have problems with mine and whatever I do,” she told Graphic Showbiz recently.

According to Efia Odo, there was nothing she could do about her life and what Ghanaians thought about her so far as she was okay with the life she was living.

“I think I am one of the coolest persons in the entertainment industry when you get close to me. I just happen to speak my mind on issues bothering me and that’s what people don’t get. When you are outspoken, you are seen as being some way.

“That is me and it is about time Ghanaians got used to me. As for my dressing, I think it is fine because other celebs dress worse than me,” she stated.

Our midfielder did not ask Efia Odo for Momo - Hearts

Sharing her thoughts on the entertainment industry, Efia Odo said there was no unity in the industry, the reason she was very careful about the kind of friends she chose.

“Most of these celebrities gossip behind one another but pretend to be friends and I really cannot understand that. As for me when you gossip about me and I get to know you are the one, then trouble for you."

“Due to that, I keep as few friends as possible because I don’t want any brouhaha around me and despite the few friends, I seem to still find myself in trouble,” she explained.

Efia Odo blamed the media for sometimes publishing false information about her. “About 70 per cent of the things said about me are false and that’s why I have this bad tag on me. I recently decided not to grant an interview with any media house because whatever I say is twisted.”

“There are so many things I wish the media don’t put out but it is unfortunate that is what they focus on. For instance, I never expected the media to put out my fight with Sister Afia, it just happened on our Instagram pages but it was all over. I did a donation and other projects but the media will not talk about it,” she stated.