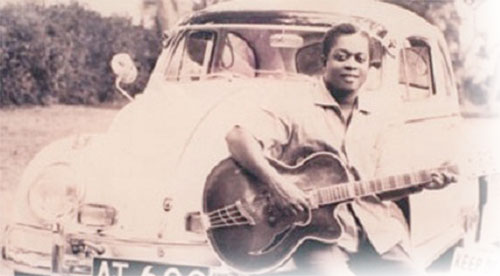 Dr. K. Gyasi was reportedly born into a musical family and raised in Patasi, Kumasi. He moved to Accra as a young man  and polished  his skills playing guitar with Appiah Adjekum’s band.

He was said to have made  his first recordings in 1952  at a mobile recording studio in Nsawam.  By 1963, Gyasi was already a popular musician and President Nkrumah invited him, along with other musicians, to accompany his official delegation on a trip through the Soviet bloc and North Africa.

Throughout the late 1960s and the 1970s, Dr Gyasi’s  Noble Kings became one of Ghana’s most popular bands. Dr. K. Gyasi was reputed to be the first band leader to introduce  the electric organ to guitar-band highlife.

In 1974, he came out with one of the best records in highlife history, the classic Sikyi Highlife medley  album  released on Dick Essilfie-Bondzie’s  Essiebons label.

Dr Gyasi formed a strong bond with the label which released other  albums of his including  The Highlife Doctor , Akwaaba! and  The Highlife Boss.
Bass guitarist, Ralph Karikari was a member of the  Noble Kings band from 1972 to 1975. He was part of the set that recorded the classic Sikyi Highlife album.

In a chat with Showbiz, Karikari referred to Dr Gyasi  as a father and teacher who contributed immensely to the musical upbringing of not him alone but other prominent instrumentalists like guitarist, Eric Agyeman and  drummer, Thomas Frimpong.

“At a point,  he did not join in to play regularly with us on stage but he was the backbone, the overall boss and director. He wrote songs for us but some of us  could also compose so we would take what we had put together to him and he would go over everything  and direct the recordings,” Karikari said.

Apart from the Sikyi Highlife album, Karikari also worked with Dr Gyasi on other highlife collections such as Yaa Kwaa Mma and Nsem Kika Adooso.

“He brought a certain sophistication as well as simplicity to highlife. We have lost a great man but I’m glad the trend of highlife he propagated is still alive,” Karikari added.

Dr Gyasi was among the personalities recognized and honoured in 2004 alongside others like King Onyina, Agya Koo Nimo,  Jerry Hanson and Efua Dorkenoo under the Living Legend programme  instituted by the National Theatre of Ghana and the Musicians Association of Ghana (MUSIGA).

Dr Gyasi’s body would be viewed by family, friends and other mourners from 4.00am to 10am this morning   prior to the pre-burial service at  Mount Sinai Methodist Church at 10.30am at  Patasi.

The final funeral rites for the late great musician will be held on Saturday, April 13 at Heroes Park, Kumasi.

A thanksgiving service will come off  at 9.00am on  Sunday, April 14 at Mount Sinai Methodist Church, Patasi.