Lost and found: Santana returns to 'I do' 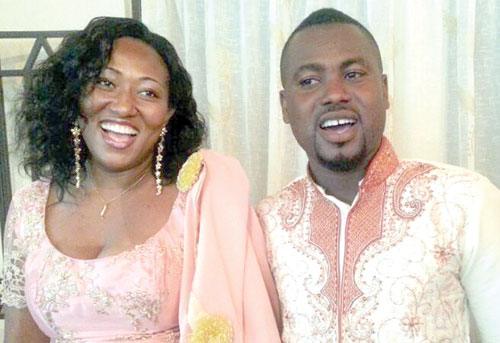 Two years after popular radio presenter, Abeiku Santana and his wife, Maggie divorced, the host of ‘Ekwanso Dwodwoo’ on Okay FM  has found another wife in the person of Genevieve, a long-lost lady friend he knew 13 years ago.

Last February, the two went through a traditional marriage ceremony and are looking forward to top it with a wedding soon.

“Gene is a gift from God and we being together again is by the divine grace of God”, Santana told Showbiz last Monday.”

“I have known Gene in Kumasi since 2001 before coming to Accra where I met and married Maggie, my ex. As God’s ways are not our ways and luck being on my side, Gene was still single so I took that bold step, proposed and she accepted.”

He described her lost-and-found love as an ideal African woman who is “not artificial, someone who projects African beauty and portrays African values,  a lady who knows how to appreciate her man in every way“, he said.

The new wife, Genevieve, who was not present at the time Showbiz spoke with Santana, called on phone later to say how happy she was in her new relationship.

Speaking with a lot of glee in her voice, Gene kept thanking God for everything and said,  “Abeiku is the love of my life, I lost him once and as I have him again, I will not let him go. He is the best thing that has happened to me, he is my soul mate, play mate, a lover and a friend.”

When asked whether she was not bothered about Santana’s huge popularity among lady admirers, she said “I believe Abeiku knows what is good and what is bad. Just as he is free to make choices,  he should also be ready to take responsibilities of his actions but then he will always come home to me.”.

Being one of media personalities who has expressed his strong support for President Mahama, Santana threw in a word of endorsement for the president.

“Mahama cannot be blamed for the energy and water crises that the country faces today. Ghanaians should stop being hypocrites and pay attention to the swift and quick intervention he is giving to the crises .

The “worwor” man said that his success in the media is based on one principle which is “life is a competition, stand tall to be seen or lie low to be buried”.

Even though Adom FM shaped him to an extent, Santana said he was having a good time at Okay FM where the experience is nicer but more challenging.

Final words to his fans? “Let us love, smile and eat healthy if we want to live long.”