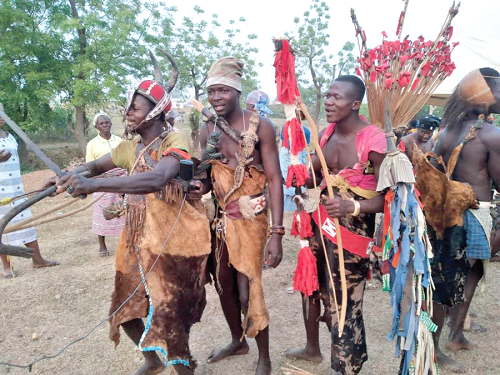 The Dia Dance (war dance) of the Gurune speaking people in the Upper East Region signifies their rich cultural heritage and unifies them.

However, this dance is said to be fading off gradually because the youth are not being taught how to perform the dance.

One of the institutions that has been passionate about re-invigorating the Dia dance is the Centre for National Culture (CNC).

Its current Regional Director, Ms Elizabeth Adongo, has been very instrumental in starting the process of launching the Dia Festival to bring back the fast-fading dance and to rebrand it as well.

On March 20, 2020, just when Miss Adongo was about to inaugurate the festival, the country started experiencing the COVID-19 pandemic, leading to a lockdown.

The festival, which was supposed to be used as a platform to teach the youth how to perform the war dance, therefore, did not take place.

Owing to the COVID-19 safety protocols which are still in force till today, Miss Adongo's vision could not be achieved in the interim.

The proposed festival was also aimed at gathering particularly visual arts students from selected senior high schools to teach them poetry recitals and how to use long-lasting indigenous colours to paint houses.

According to history, the materials used for painting houses by the ancestors of the Gurune people never faded, no matter the vagaries of the weather.

There are many historical accounts of how the Dia dance started but one of the accounts narrated by Ms Adongo states that a hunter built a hut with two doors -an entrance and exit.

During one of the hunting expeditions, the hunter was attacked by a wild animal and so he ran into the hut. When the animal entered the hut, the hunter then ran out through the exit door and closed it.

The animal could not find its way out of the house, so the hunter managed to kill it. He cut off its tail and took off its horns and skin. The hunter then shared the carcass with his colleague hunters and told them how he managed to defeat the wild animal.

Later, when the hunter’s parents got to know about the adventure, they (the parents) suggested that henceforth they (the hunters) should now dress like warriors to prove to people that they were brave.

It is believed that was how the Dia war dance started. It is, however, not known the exact period it started, but it is said to have begun centuries ago when ancestors of the Gurunes were hunting for game and wildlife in the forests.

The costume is at the core of the Dia war dance. It differentiates one clan from the other as well as indicates the attributes of the wearer. It makes the war dance performance colourful.

During such performances, one can see an array of weapons held by the performers. The most visible weapons are the bow (Tanhɔɔ in Gurune language) and arrows (Pɛɛhɔ).

They are made out of the stem of plants from the forest. In the era of wars, the tips of these arrows were poisoned with either plant poison or crocodile bile to make it deadly.

Also, the tips are fastened to metal heads for quick piercing. The arrows are put in a quiver known as (Loko), which is made from the skin of an antelope or any other animal.

Another weapon that can be easily seen during the war dance performance is the spear (Kannɛ), which is made of metal or wood with a metallic head and decorated with colourful strands of fabric in order to make it look scary.

During the dance, performers act as if they are about to throw a spear while stamping their feet on the ground rhythmically, as groups of women sing in the background.

The Nɔɔ'nn is a cap which has horns mounted on it. The cap is made of calabash which is covered with fabric and decorated with cowries. Mostly the horns from wild animals are used but where it is difficult to find such horns, the horns of domestic animals such as cows and rams are used.

It is also a common sight to spot some of the dancers in masks. The lead dancer is the most elegantly adorned among the dancers. Therefore, it is believed the wearing of the skin shows the hunting skills and the spiritual endowment of the wearer.

A person wearing the skin of a ferocious beast commands more respect than one who wears a skin from a domestic animal. The skin used for such functions though can also be used as a ceremonial or occasional wear by priests, Tindaanas (custodians of the land) or elders of a community.

Those who do not want to wear trousers put on a triangular apron (Lɛbrɛ). Others put on Kuru-lannɛ, a trouser with very loose crotch and panel. Any footwear can be used for the dance. The basic idea is that it should be robust enough to protect the feet from getting hurt when the feet are vigorously stamped on the ground during the dance.

To make the footwear comfortable enough, performers use lofty socks. The colour of the boots or the socks is of no significance in the performance.
Other minor accessories include the belt, which is made from animal skin. It is used to decorate the costume. A wrist band is also used by performers who use the bow and arrows. This is to protect the wrist during the shooting of the arrows.

The horse tail is another significant item in the dance. This is usually held by women and it is to show the hunting abilities of the group performing the dance.

There is also a bag, which is made from animal skins known locally as Tapoɤ.

This bag is hung around the shoulder and during the era of fights or wars, this bag was used to store food as well as other relevant items.

This dance, which signifies the cultural heritage of the Gurune people, is now performed at funerals with the combination of drummers in honour of a late relative.

Aside from the fact that the Dia war dance is a way to show respect to a deceased family member, it also unifies the people.