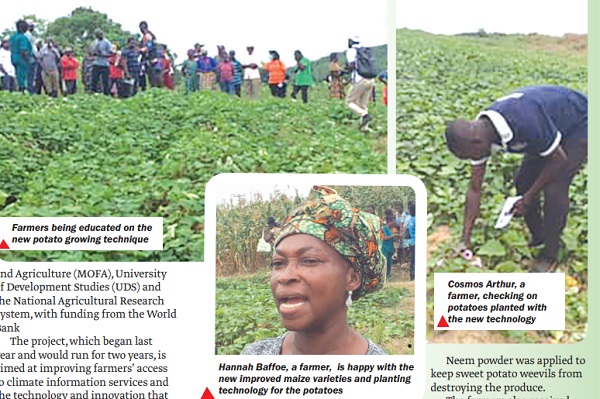 HANNAH Baffoe has been a farmer all her life but has not been this excited about crop cultivation and production as she is now.

“The next season promises to be good. The world and weather are changing due to climate change which has had a worrisome impact on farming efforts and produce, and now we see good days ahead. We are ready to change how we farm in order to increase our produce and be relevant to our families and communities as farmers,” she stated.

Ms Baffoe is not the only person excited about the next farming season.

One hundred and nineteen other farmers in the Komenda-EdinaEguafo-Abrem (KEEA) municipality said they were ready to adopt efficient more climate-resilient farming practices that would help them cope with the times.

The farmers were part of education and training given through the cultivation of demonstration farms for new varieties of maize and potatoes planted with new technologies.

The farms are part of the Accelerating Impacts of CGIAR Climate Research for Africa (AICCRA) Ghana project, working to make Ghana’s agriculture and food systems more resilient in the face of climate change.

AICCRA Ghana bolsters the livelihoods of resource-poor farmers across Ghana and supports greater food security in the country by getting innovations developed by CGIAR and its partners off the shelves and into fields.

The AICCRA Ghana project is led by the International Institute of Tropical Agriculture (IITA) and works with local organisations including the Crop Research Institute of the Council for Scientific and Industrial Research (CSIRCRI), the Ghana Meteorological Agency (GMet), Ministry of Food and Agriculture (MOFA), University of Development Studies (UDS) and the National Agricultural Research System, with funding from the World Bank.

The project, which began last year and would run for two years, is aimed at improving farmers’ access to climate information services and the technology and innovation that underpins climate-smart agriculture.

AICCRA is using the demonstration farms to showcase and introduce farmers to climate-smart agriculture innovations, such as improving crop and seed varieties that are climate resilient.

The project has 31 demonstration farms in 22 communities across six regions. These are the Greater Accra, Central, Bono East, Northern, Upper East and Upper West regions.

The farmers said they were impressed with the output of the varieties of maize and new farming technologies adopted for the potatoes from the demonstration farms.

For the maize, four varieties were cultivated - the Denbea, Abontem, Honampa and the Suhudu, together with the locally produced maize.

The varieties are drought resistant, have early cobbing characteristics and are climate-change resilient.

A Senior Research Officer at the CSIR-CRI, Dr Stephen Yeboah, explained that climate change and its effects on food production required the deployment of fi rm interventions that would increase farmer yields and ensure food security.

Such interventions, he said, would also enhance the well-being of farmers.

He noted that the maize varieties were particularly chosen for the Central Region, considering the fact that they were demand-driven.

Neem powder was applied to keep sweet potato weevils from destroying the produce.

Ms Baffoe, who cultivates both crops, could not hide her joy about the output of the new varieties of maize.

“I see a great difference in the output. We can’t continue using the old varieties even when they are no longer adaptable to our circumstances, considering climate change and its effects on our agricultural seasons,” she said.

Another farmer, Cosmos Arthur, said the Neem powder applied near the potatoes had treated the soil and the huge sizes of the produce were indicative that the problem of sweet potato weevils had been dealt with.

“We are happy about this education and insight. It is certain to change our farming and hopefully make us richer,” he stated.

The Municipal Chief Executive for KEEA, Solomon Ebo Appiah, said agriculture and farmers remained a critical component of the local and national economy and it was necessary they were supported with technologies to optimise production and ensure food security.