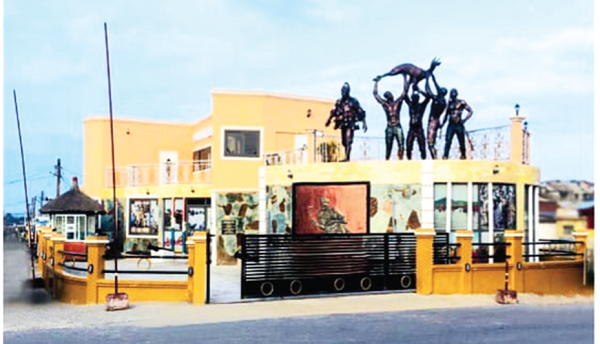 A sculpture of Asafo men carrying a catch (bushbuck) at the Osimpam Heritage Centre
30.5k Shares

Winneba, locally referred to as Simpa, has gained recognition as a town with one of Ghana's most thrilling festivals, thanks to its long-running, vibrant and colourful Aboakyer festival.

The town, when properly explored, could add up to the Central Region’s wealth of cultural landmarks, and boost the tourism sector.

As a coastal town hosting some of Central Region’s most interesting beachfronts and other remarkable educational institutions, Winneba has also added up to the region’s wealth of historic monuments, with its monumental sites known as the Effutu Heritage Centres.

The Effutu Heritage Centres feature a wide range of attractions, from breathtaking vistas of historic structures to calm and friendly environments that will elevate the country's tourism industry.

The centres are intended to promote Winneba as a significant Ghanaian tourist destination by highlighting Effutu customs and traditions for the Effutu people's economic gain.


The edifices were established as the modest contribution of the Member of Parliament (MP) for the Effutu Constituency, Alexander Kwamena Afenyo-Markin, to educate both the indigenes and guests to Effutu on its origins and cultural heritage.

In an interview with Mr Afenyo-Markin, he said the idea of the heritage sites was born out of a desire to recount the role of the Effutus in the history of Ghana, especially in the slave trade and the attainment of independence by the country.

He observed that the Central Region's historical landmarks, monuments, and other tourist attractions were all centralised in Cape Coast, while other areas of the Region that had equally promising facilities had been disregarded.

"Everything was going towards Cape Coast and there was the need to tell our own story and project what we have as Effutu people,” he said.

The lawmaker reaffirmed that the decision to put up the facilities was made in part to portray the political reconciliation and friendship between the late J. B. Danquah and Ghana’s first President, Dr Kwame Nkrumah. 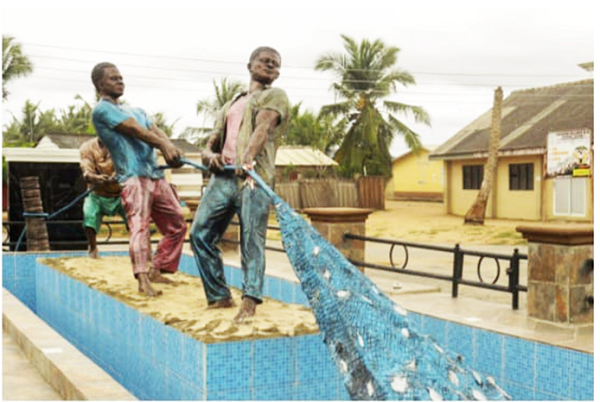 "So you can see a monument depicting people holding hands to symbolise unity and reconciliation from the 'Reconciliation Roundabout at Winneba Junction,'” he said.

Mr Afenyo-Markin said there had been a positive response since the establishment of the heritage centres, with an average of 50 visitors daily and thousands of people trooping to the centres during the recently held Aboakyer festival.

Asked how the project was funded, he said it was from his personal resources as his modest contribution towards the opening up of Winneba to the outside world.

The heritage centres comprise the Unity Square, the Osimpam Heritage Centre and two fishing monuments at Akosua Village and Eyipey.

At the Unity Square, one would be greeted by eye-catching displays of Asafo paraphernalia.

The main features at the Unity Square are; three Asafomen lifting high the flag of the Effutu state, and paraphernalia of the Asafo cast on the main wall, with the head of the bushbuck they hunt in the centre.

According to the Paramount Chief of the Effutu Traditional Area, Neenyi Ghartey VII, "the dream behind this is to unify the people, taking the theme ‘together, we can make it.’"

The beauty of the long-running Aboakyer festival is highlighted by the centre's exhibition of distinctive Asafo costumes, musical instruments and dancing styles, which provide visitors with an incredible cultural experience. 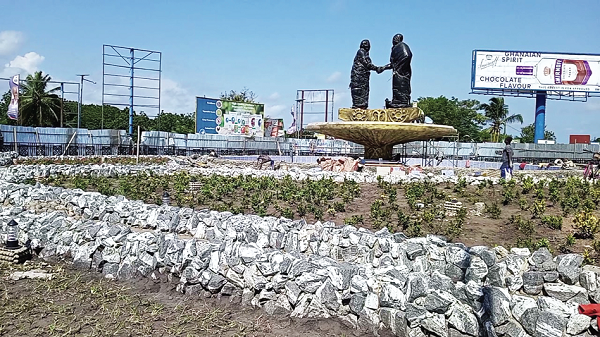 Some of the remarkable instruments visitors would chance upon at the Unity Square include ‘Kakradaa’ (Rattle)- a percussion instrument associated with the Tuafo Asafo No. 1 Company, which is used to maintain rhythm when performing drum and dance or when the Asafo Company is moving, and a large sized bell made of brass with a wooden handle, which is associated with the Dentsefo Asafo No. 2 Company.

Pictures of former chiefs and other Asafo leaders, as well as carvings that are a beautiful sight to behold, are on show at the centre. 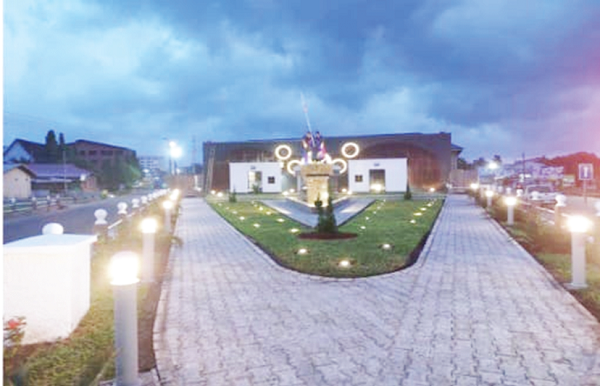 On the top floor is also erected a sculpture of the Asafo Company holding aloft the catch for the king.

The two fishing monuments in Akosua Village and Eyipey, respectively, are the last of these historical landmarks in the Effutu Municipality.

These monuments recount the tale of the great fishermen and the fascinating background of some of the best fishermen in the country's history, who were natives of the area.

A massive sculpture of three fishermen drawing seine nets is on exhibition in the Akosua Village, while another enormous sculpture depicting a fisherman pulling in a massive catch is nicely displayed at Eyipey.

In an interview with the Daily Graphic, Neenyi Ghartey, implored relevant tourist industry players to step up efforts to help publicise the Effutu heritage monuments to promote purposeful tourism in the Central Region.

He noted that by exploring and promoting these under-the-radar tourism hot spots in the area, they would be brought to everyone's attention globally to generate more revenue for the country. 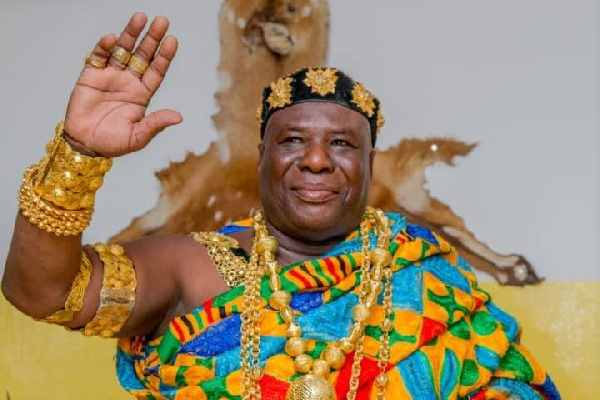 "Countries all over the world are looking into undiscovered tourism hot spots and identifying them to attract more visitors in order to boost their economies," he said.

He stated further that "given the decrease in tourists coming to our country to visit our sites, I believe if we pay attention to those that haven't gotten much attention and market them effectively, we will be giving tourists something fresh and interesting to look forward to and also add up to our tourist destinations in the country."

Neenyi Ghartey observed with worry that despite the Heritage Centres' potential to become one of the top tourist destinations in the Central Region, it had not received the needed support from the government and other key players.

He lamented that stakeholders had not provided them with the necessary support and push for appropriate action.

"No government institution cares now for its upkeep and they are not showing interest. And we also realised the assembly could not manage it because of finances, so it was handed over to the traditional council. We employed some people, but they have no serious ideas about tourism and management of monuments," he said.

Neenyi Ghartey opined that what needed to be done urgently was for the appropriate actions to be taken to ensure that the Heritage Centres became properly projected so that it could rake in more revenue, similar to other centres in Cape Coast and other locations in the Central Region.

"If they start marketing this place as they do for Cape Coast, Takoradi and other areas, I am sure we can make headway. With that, patrons get to experience a new tourism environment and also get to sample local delicacies that are not available elsewhere, making it a genuinely unique experience for them," he added.
Neenyi Ghartey indicated that the traditional council had not wavered in its efforts to turn the area into a top-notch tourist attraction, and that current initiatives included lobbying for educational institutions to "visit and learn about some of our values."