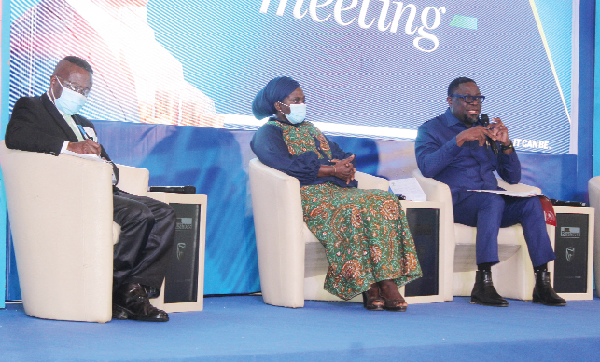 Experts at the Graphic Business/ Stanbic Bank Breakfast Meeting have stressed the need for the country to live within its means to overcome its economic challenges.

To achieve that, they have advised that the government should ensure prudent fiscal discipline and put in place measures to boost domestic revenue.

The experts are the Director of Research at the Institute of Economic Affairs (IEA), Dr John Kwakye; the General Manager of the Venture Capital Trust Fund, Hamdiya Ismaila, and the President of the Association of Ghana Industries (AGI), Dr Humphrey Ayim-Darke.

In their assertion, living within our means would also help the country avoid being in distress financially, which would necessitate the country going to the International Monetary Fund (IMF) for a bailout.

The Graphic Business-Stanbic Bank Breakfast Meeting is a quarterly event organised by the Graphic Communications Group Ltd (GCGL) for the business community to exchange ideas on the prospects of the economy.

Yesterday’s meeting was the third for this year and it was on the theme: “Living within our means: An imperative for economic success.”

Over 100 participants from the business community, academia, civil society and think tanks attended the event.

Dr Kwakye said the country living within its means was an important and guiding principle which would help avoid financial crisis.

He said over the years, the country had been recording huge budget deficits which had been the root cause of the fiscal mess in which it found itself.

“This is not the first time we have been in this situation and have gone to the IMF. The fact that we have been going to the IMF for this number of times tells that we have not been practising fiscal discipline and not living within our means,” he stated.

He pointed out that the country had a long history of high fiscal deficits, which dated as far back as 2010.

He said between 2010 and 2018, Ghana’s fiscal deficit had averaged 6.6 per cent of GDP, compared to the average of 3.2 per cent for sub-Saharan Africa (SSA) for the same period.

“So for this entire period, 2010 to 2021, Ghana has consistently recorded much higher fiscal deficit than the other countries in the region and this is what has led to the huge public debt.

“This shows that we have not been able to manage the economy as prudently as our peers have done. We have been living far beyond our means,” Dr Kwakye indicated.

The renowned economist noted that for the country to effectively live within its means, the government must put in place measures to boost domestic revenue.
“As a country, our total revenue is just about $12 billion, so if we have to live within our means, then we must spend either up to that amount or not too higher than that; but that is not enough. $12 billion is peanut for a whole country,” he pointed out.

He said the country was not collecting enough taxes.

“I am not talking about increasing the tax rate. There are loopholes in our tax system that we need to plug, such as tax exemptions, property taxes, trade mis-invoicing and administrative inefficiencies,” he stated.

For the country to effectively live within its means, he said, the government should be able to mobilise about $20 billion in revenue annually.

Ms Ismaila also said for the country to be able to live within its means, it was necessary to widen the tax net to capture a lot more people.

She said it was also necessary for the financial industry in the country to provide capital for small and medium enterprises which had the potential to grow and employ more people.

By so doing, she said, new workers who would be employed would also pay taxes, which would increase the country’s revenue base.

For Dr Ayim-Darke, another way for the country to increase its revenue base was through industrialisation.

He noted that Ghana still exported all its resources, such as gold, timber, cocoa and oil, in their raw state, which did not fetch enough for the country.

“Over 60 per cent of the items exported are still in the raw state, and as long as you do that, your revenue streams will not be sustainable and enough to meet the various needs and wants of your country.

“So the limited resources as a result of the pre-colonial structure become a hindrance to living within our means,” he stated.