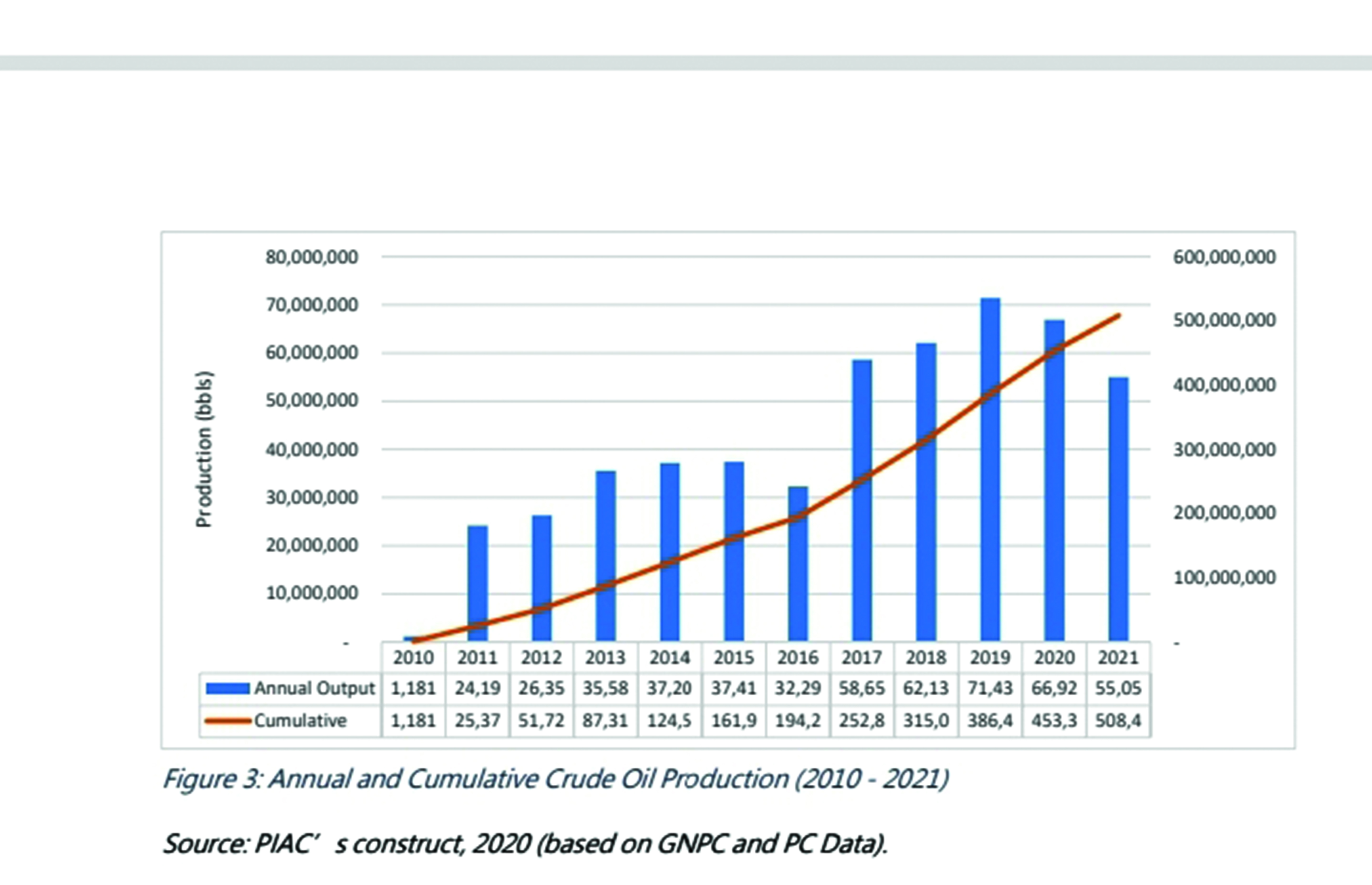 A report released by the Public Interest and Accountability Committee (PIAC) cited flow assurance issues, inadequate pressure support for the Ntomme field, challenges in water injection on the Enyenra Field, increasing gas-oil ratio in the Ntomme field, as some of the factors for the decline in the period under review.

Currently, oil is produced from three fields, namely Jubilee, TEN, and the SGN.

According to the report, the relatively lower production volume in 2021 was due to reduced production on all the three producing fields.

A breakdown from the report indicated that the Jubilee field contributed half of the total output, even though production reduced by 10 per cent from the 2020 output (30,424,539 bbls).

The reduction in crude oi production resulted in unplanned shut down at both Tweneboa-Enyenra-Ntomme (TEN) and the Sankofa Gye-Nyame (SGN), according to the report.

Some stakeholders in the sector have suggested that the operators of the oil fields be surcharged by the industry regulator because the country could not cash in on the higher commodity prices on the world market last year, but the Petroleum Commission (PC) is adamant, saying it did not find any cause for a surcharge.

The Manager in charge of Project Evaluation at the PC, Mr Ebenezer Harmah, in an interview on April 22, 2022 disputed claims that commodity prices only shot up this year and was at average price last year.

He said the operator was required to do its work with utmost due diligence and care and, therefore, if the commission had any cause to believe that there was gross misconduct or negligence that led to the production declines, it would sanction.

“They are working with equipment and despite the scheduled maintenance, they can develop faults. There hasn’t been any issue. Normally, we will look at whether they follow their maintenance schedule, and there is also class inspection by independent institutions at periodic times. All these are done so I don’t think it is the fault of the operators,” he said.

On what should be done to prevent or reduce such occurrences to the barest minimum, Mr Harmah recommended a timely and proper communication by the operator.

“The regulator will continue to ensure regulatory oversight is discharged creditably. For the operators, when these unplanned shutdowns come, there is the need for communication. You do not initiate the shutdown before you inform other stakeholders and institutions who are dependent on such supplies,” he said.

He added that unplanned shutdowns may still have about a week or less to plan.