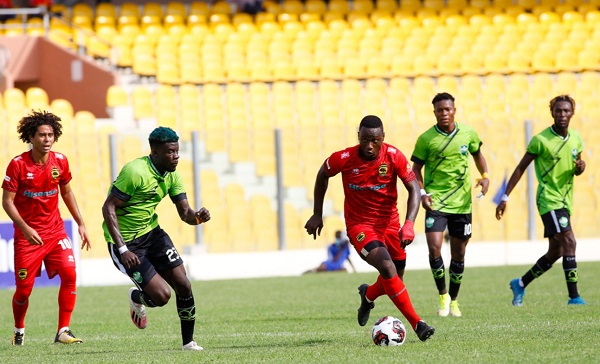 Asante Kotoko staged a remarkable comeback when they scored three times in the last five minutes of their match-day one encounter against Dreams at the Accra Sports Stadium on Saturday.

Salifu Mudasiru, Richmond Lamptey, and Isaac Oppong scored the goals for the Porcupine Warriors after Fatawu Issahaku delivered a stunning solo strike for the home side midway through the second half.

Kotoko started on the front foot making some attacking incursions in Dreams' goal area as they searched for the opener.

The first clear-cut chance of the game fell for Kotoko's new signing Stephen Amankona in the 10th minute but Dreams' goalkeeper Solomon Agbesi pulled off an excellent save to keep the game scoreless.

Fabio Gama's curler in the 15th minute seemed goal-bound but goalkeeper Agbesi pulled off a last-ditch save to deny the Brazilian attacker.

Kotoko coach Dr Prosper Nartey who was playing his first competitive game for Kotoko had certainly impacted their style of play as the Porcupine lads exhibited some sleekness in their passing from defence to midfield to attack.

Kotoko goalkeeper Razak Abalora who was untested in the first quarter of the game was called into action in the 23rd minute but demonstrated his experience as he denied Dreams winger Mohammed Sulemana.

Black Stars player Fatawu Issahaku who signed for Dreams FC a few days ago nearly opened his account for the season but goalkeeper Abalora was once again was equal to the task.

Dreams FC goalkeeper who was by far, the busier of the two goalkeepers pulled off his third staggering save of the first half when he tipped Christopher Nettey's long-range strike over the bar just on the brink of halftime.

The first half ended in a stalemate.

Kotoko was more purposeful with their attacks at the start of the second half but lacked the cutting edge in front of the goal with their new striker Samuel Boateng kept in check by Dreams backline.

The game was very balanced past the hour mark with Dreams FC looking more dangerous on the attack.

Kokoko was stunned with the brilliance of Issahaku as they restarted the game with more urgency in the approach as they searched for the equalizer.

Dreams FC had a glorious opportunity to double their lead in the 76th minute but Suleman Fahadu narrowly skewed his effort off target.

Kotoko midfielder Salifu Mudasiru who was excellent in the game nearly struck Kotoko level on the 80th minute but his feeble shot was easily gathered by goalkeeper Agbesi.

Goalkeeper Agbesi who had been excellent in the game denied Abdul Ganiyu the equalizer but Kotoko did restore parity a few minutes later after Mudasiru struck the ball home for Kotoko.

Oppong added the second goal a few minutes later with a ferocious shot with flew past goalkeeper Agbesi.

Lamptey sealed off an emphatic win for the Porcupine Warriors as he scored in second-half added time to make it 3-1.