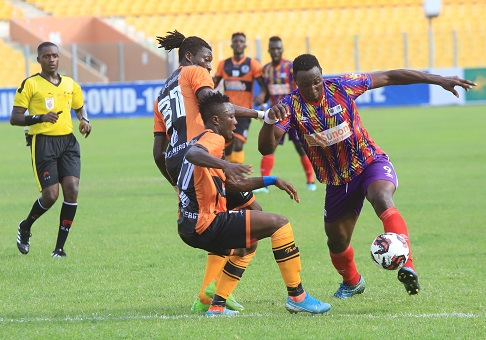 Legon Cities displayed resilience to hold Accra Hearts of Oak to a goalless draw in their opening Premier League game at the Accra Stadium yesterday.

The 'Royals' will be indebted to their goalkeeper Richard Ofori whose exploits in posts saved them from conceding a goal to Hearts as the league champions dominated the exchanges and created many scoring chances but could not find the back of the net.

Ofori's brilliance started in the ninth minute when he sprawled to parry away Kofi Kodzi's goal-bound shot before he returned from recess to display superb reflexes to deny skipper Fatawu Mohammed a goal from a header, as well as a 55th minute save of a point-blank shot by Kodzi which was greeted with wild applause by even Hearts supporters.

Coach Samuel Boadu's men were unlucky for failing to break the deadlock in the 69th minute as midfielder Ibrahim Salifu watched his free-kick bounce off the crossbar. It was one of the anxious moments for the Phobians who had expected to begin their title defence with a win on home soil.

By the eighth minute, goalkeeper Antwi was called to duty and minutes later Legon Cities defender, Mohammed Issaka, was forced to make a timely clearance of a shot by Ibrahim on the goal line after a brilliant play between Kodzi and Daniel Afriyie Barnieh who set up Ibrahim to apply the knockout punch.

Just when Hearts seemed to be in control, Legon Cities danger man, Johan Attuquaye, also called goalkeeper Richard Attah to duty after he outwitted the Hearts defenders to fire from close range in the 22nd minute which the Hearts shot-stopper dealt with.

Both sides made attempts at goal with Rahman Abdul also giving the Phobians a scary moment when he surged from the flank into the penalty box but watched in disappointment as his shots hit the side of the next.

At the other end, it was Hearts forward, Barnieh, who incurred the displeasure of the home supporters when he missed a fine opportunity to put his side into the lead after he dribbled his way through the Legon Cities back line and went for a spectacular goal scoring attempt while unmarked teammates Kodzi and Isaac Mensah were in good scoring positions waiting for a pass.

Hearts returned from the recess and mounted sustained pressure on their opponents in the bid to break the deadlock, forcing goalkeeper Ofori to make important saves while his opposite number, Attah, was virtually on holiday.

Occasionally, Coach Maxwell Konadu's side gave Hearts some nervy moments but were also guilty of wasting scoring chances in the latter minutes of the barren game.