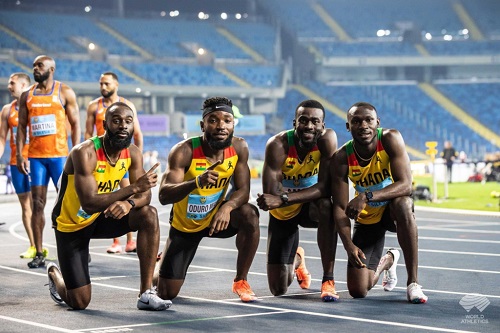 Ghana’s sprints quartet put on a show at the World Athletics Relays to book a place at the Tokyo Olympic Games but missed out on a medal after being disqualified in yesterday’s 4x100m men’s final.

Last Saturday, the quartet of Sean Safo-Antwi, Bnjamin Azamati, Joseph Manu and Joseph Paul Amoah clocked 38.79 seconds in their heats to place second behind the Netherlands (38.79 sec) in a photo finish in the Polish City of Silesia.

The second position automatically earned them a place at the Olympic Games and automatic qualification to the 2022 World Athletics Championship in Portland, Oregon, USA.

It will be the second successive World Championship appearance for the Ghanaians who participated in the 2019 competition in Doha, Qatar.

It was a feat which excited UK-based Safo-Antwi who ran the first leg of the relay, as he qualified for his second successive Olympic Games after representing Ghana at the 2016 competition in Rio de Janeiro, Brazil.

“This is amazing, it feels so good. We knew that we could make it. We just had to put the pieces together. I am a happy man. We have been training well. We were meant to be at the Olympics. At my first leg, I played it safe,” said the 30-year-old sprinter.

Ghana's sprints quartet have qualified for the summer Olympic Games

Unfortunately, there was no joy for Ghana’s female sprints quartet of Gemma Acheampong, Latifa Ali, Janet Amponsah and Halutie Hor, as they could only finish third behind Italy and Japan in their heats in a time of 44.85 seconds. As a result, they missed out on qualification for both the Tokyo Olympics and next year’s World Championships.

Following their impressive time in the heats, it was expected that the Ghanaian men’s quartet will put up an even improved performance in yesterday’s final when they ran against eventual winners South Africa, Brazil, Italy, Germany and the Netherlands.

They appeared to have picked up a bronze medal after finishing third but were later disqualified alongside initial winners Brazil, as South African star Akani Simbine anchored his team, which included Thando Dlodlo, Tlotliso Gift Leotlela and Clarence Munyai to win the men’s 4x100m gold in a time of 38.7 seconds.