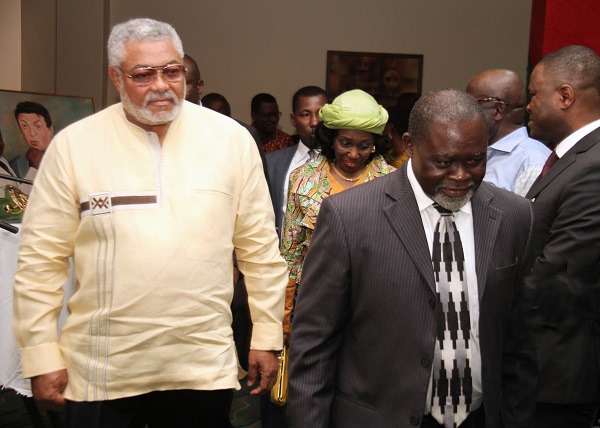 I was a beneficiary of Rawlings' debt to beans sellers - Azumah
30.5k Shares

Boxing legend Azumah Nelson has praised the late former President Jerry John Rawlings for the personal sacrifices he made to ensure that he became a world champion.

The former WBC featherweight and WBC super-featherweight champion in a eulogy to Mr Rawlings who died on November 12, 2020, said for years while he trained as a struggling boxer he benefited from many subtle acts of kindness from the former President which included debts to food vendors.

"During your time as the Head of State, you showed effortless humility by cleaning my room and ensuring that my fellow boxing colleagues and I had a place to rest after rigorous training," Azumah said in a eulogy copied to GraphicOnline.

"Always a man of subtle acts of kindness, for years while I trained as a struggling boxer, I would randomly receive portions of beans and gari. It wasn't until many years later that I discovered we were beneficiaries of the debt you owed the beans sellers. You even rented an apartment for me. In return, you only asked me to train hard and represent our beloved Ghana for the world to see that greatness can come from Ghana, the true gateway to Africa".

Azumah also expressed gratitude to Mr Rawlings for his priceless guidance throughout pivotal moments in his career which culminated in him knocking out Wilfredo Gómez in round 11 to win the first of his world titles (WBC featherweight championship) on December 8, 1984.

"When it came to counsel, you freely shared priceless guidance with me. When I wanted to join the military after representing the force at the World Military Games where I won gold, you advised me against it saying 'you saw greatness in me and joining the force will limit my growth in boxing'.

"You saw things I didn’t see. I dare say you are a prophet we failed to acknowledge. I speak on behalf of many of your mentees and give you our heartfelt thanks. You have motivated us, enabled us, supported us and promoted our personal growth and professional development.

“Leaders like you are true champions, fighting in the ring of life, where bouts can bring you down, you pushed on, rose above and won. And as a true champion, you shared your greatness with others, empowering them to rise higher and help make Ghana, Africa, the world a better place for all.”

Nelson said he felt excruciating pain when he heard about the demise of Mr Rawlings who he described as his "number one fan and mentor".

He disclosed that Rawlings was the blueprint for his attitude to life, work and many other things.

"If he were before me today, I would say, without haste, that undeniably, God used you to change my life into the man the world celebrates today, as a former world boxing champion. You are indeed the true champion, a champion like no other. When I think of you and the impact you had on my professional career, and on the careers of countless others, you are unquestionably Godsent! I dedicated my biography, “The Professor” to you because you taught me so many life-building skills that played a direct role in bringing out the champion in me. You believed in me, even when I doubted myself. As the true professor, you shared “lessons in life” that demonstrated humility, gratitude and faith".