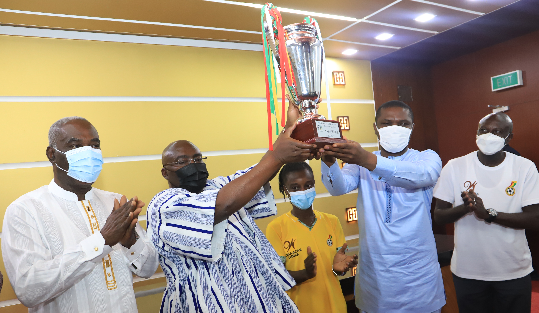 The government yesterday gave Hasaacas Ladies Football Club, a pat on the shoulder when it presented an amount of GH¢50,000 as a reward for their spirited performance in this month’s continental championship and also in the domestic league.

The Vice-President, Dr. Mahamudu Bawumia, who handed over the amount to the team, said: “I spoke to the President, Nana Addo Dankwa Akufo-Addo, and in recognition of this major honour you have done for Ghana, I am, on his behalf, giving you GH¢50,000.”

He said the government was really committed to supporting the women in sports to realise their potential both on and off the pitch.

The Vice-President, who could not hide his excitement, said: “You have indeed brought the trophy home and on behalf of President Nana Addo Dankwa Akufo-Addo and the government, I congratulate you on your outstanding achievement.”

Dr. Bawumia told the players and the technical team that by winning the CAF Womens Champions League WAFU B, they had recorded their names in the history books by becoming the first team to win the competition and urged them to replicate a similar performance at the next tournament in Egypt.

“I would like you to know that in me you have someone who will champion not only the cause of Hasaacas Ladies but women’s football in Ghana as a whole,” he assured them and said they should expect to see him during some of their matches.

He said prior to the team’s departure for the competition in Cote d’Ivoire, he conveyed his best wishes and the wishes of the President to the team and urged them to raise the flag of Ghana high and bring the trophy home.

The Vice-President also gave them $10,000 before the team left for the tournament.

Dr. Bawumia, however, acknowledged that the competition was tough and that although the first match did not go according to plan they had to recover and restrategise and suddenly things started coming together and they started winning.

He said the final match was one that gave him sleepless nights because they played Nigeria.

“I did not have a sense of how strong the Nigerian team was but you know whenever Ghana is playing Nigeria in any competition it is a major matter.

“Lo and behold you won the competition so the win was good but beating Nigeria was extra sweet,” Dr. Bawumia emphasised amid applause from the ladies and their technical team.

The Minister of Youth and Sports, Mr. Mustapha Yusif, was grateful to Vice-President Bawumia for his immense support to the team which he said was undoubtedly the push which helped the team to be successful at the championship.

The Chairperson of the Women’s Premier League Committee, Ms. Hilary Boateng, who led the team and officials to the seat of government said the achievements of the club must serve as an impetus for Ghanaians to appreciate and develop interest in women football.

She said women’s football had been in existence since 2012 but it was now enjoying an improved coverage.

She, therefore, called on all to support and watch women’s football.

The Coach of the team, Mr. Yusif Basigi, took time to introduce all the players to Dr. Bawumia and told him (Dr. Bawumia) that although the Nigerian team claimed they were at the tournament to school the Ghanaian ladies, they ( the Ghanaians) ended up schooling the Nigerians to win the ultimate.

Mr. Basigi said the team would soon be going for another tournament in Egypt, giving the assurance that they were not just going to participate in that championship but to raise high the image of the country.

The ladies have since lived up to the accolade of their male counterpart “Giants of the West” by winning the Ghana Women’s Premier League four times.

On June 26, this year, they beat rivals Ampem Darkoa Ladies from the Ashanti region 4-0 to win the league and went on to silence them (Ampem Darkoa) for the second time 2-0 on July 3, 2021 in the Women’s FA Cup.

The team put the icing on the cake in Cote D’Ivoire in the CAF Women’s Champions League WAFU B, when they humbled River Angels from Nigeria 3-1 on August 5 this year to win the treble.