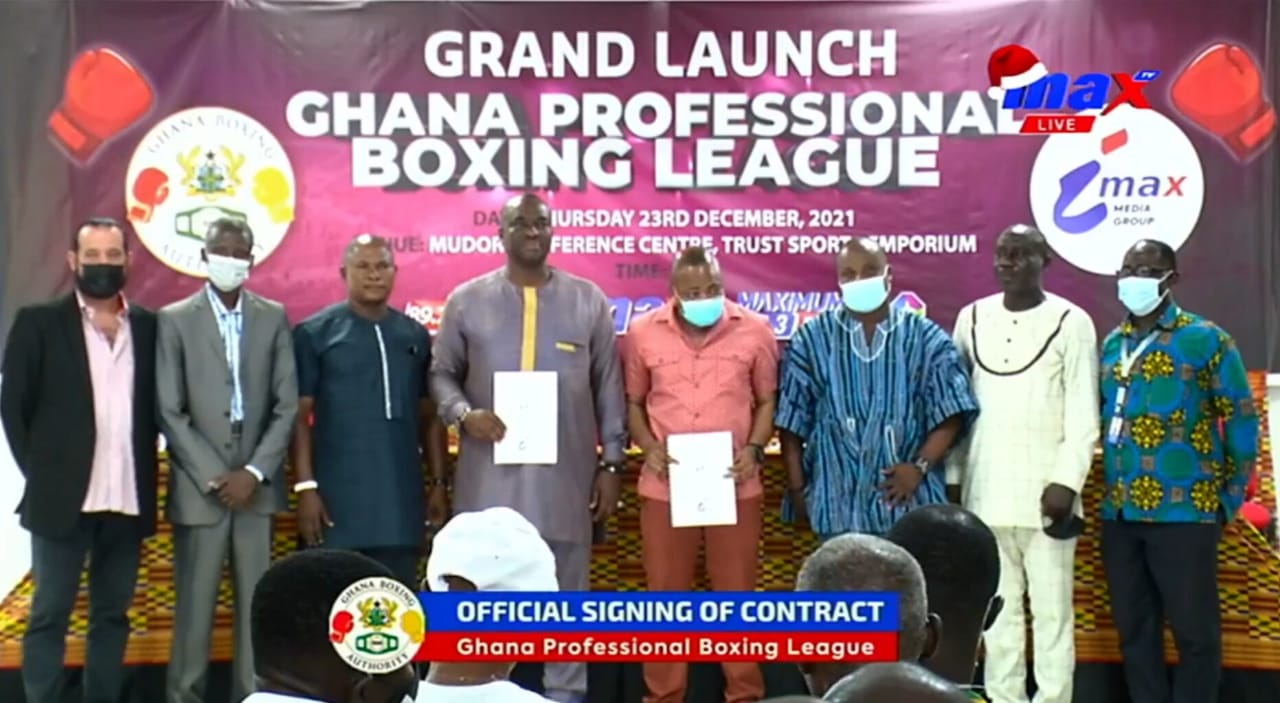 The Ghana Boxing Authority (GBA) and Imax Media Group on Thursday signed a five-year developmental partnership at the grand launch of the Ghana Boxing League in Accra.

The deal means that the novelty Boxing League will return after a 16-year absence.

Signing on behalf of the GBA, the President Mr Abraham Kotei Neequaye paid tribute to the bold and decisive move by iMax Media to invest heavily in the sport.

"The vision and efforts of the GBA has today been given a huge boost by iMax Media who have taken the big positive decision to boost the development of Boxing in Ghana," Mr Neequaye said.

The Ghana Professional Boxing League will be one of the biggest collaborative drives between the GBA and the ambitious media, communications and production house; iMax Media.

In brief remarks, the CEO of iMax Media Mr Maxwell Techie reiterated the readiness of his organization to deliver the best production content for television viewers as well as live boxing audiences.

"We are ready and capable of producing quality content of the Boxing League and looking forward to a solid partnership with GBA," he said.

Shedding more light on the upcoming Boxing League, the Marketing and Commercial Director of iMax Media revealed that the bi-weekly boxing league will be telecast live on Max TV twice a month.

"This is a huge partnership with a sponsorship package of US 1.7 million dollars offered by Imax Media Group which will stretch over a five year period. So we are looking at a breakdown of 340,000 US dollars annually".

According to Group Director of Imax Media, Mr Fadi Fattal, the annual budget of $340,000 is an investment which will go into the fight purses of boxers, allowance for event staff, ring officials, live production coverage, publicity and more.

Representing the Minister of Youth and Sports, Mr Eric Mensah Bonsu stated that the Ministry is fully behind the landmark boxing project.

"The Sports Ministry is particularly excited by the league system which is expected to keep boxers active,hone their talents and develop them into potential global athletes via Television exposure," he said.

The National Sports Authority (NSA) echoed a similar position as stated by the deputy Technical Director of the NSA Mr Kwame Ampofi Jnr.

"The league will bring about healthy competition among boxers and gyms as well as the needed rivalry among communities which means more involvement by primary stakeholders and boxing fans alike," Mr Ampofi Jnr said.

Mr Gideon Hansen Appiah Head of Marketing at the GBA said that quite apart from the gruelling and exciting fights to look forward to, unseen and unheard stories of pure boxing drama behind the scenes will be revealed through special programes dedicated to the Boxing League.

According to the Managing Director of the Bukom Boxing Emporium, Mr John Yaw Nimo, his venue is the best equipped in Ghana to host the biggest Boxing project ever.

He said: "The huge investment by iMax Media will trickle down to the positive projection of Boxing from the traditional communities like Bukom, Chorkor, James Town, Accra New Town, Teshie and La. These features will not be limited to Accra but other boxing gyms across the country in Tamale, Sunyani, Keta, Kumasi and Cape coast".

With the acquisition of a Promotion and Management license, iMax Media and the GBA have assured that only stakeholders with licences will be allowed to participate in the Boxing League.