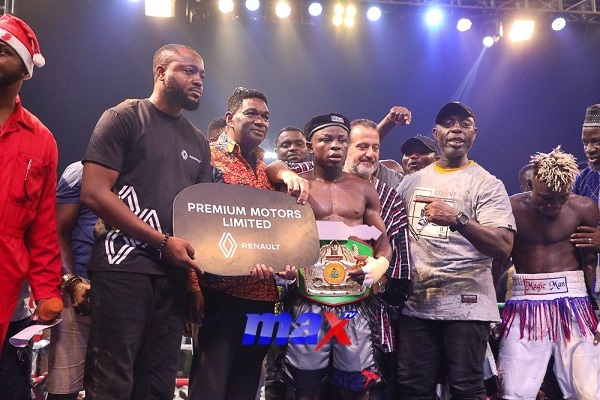 Charles Tetteh is decorated with his national title and also receives a dummy key to his Renault car from an official of Premium Motors
30.5k Shares

The Panix Gym boxer also took home a brand new a Renault car as the overall best boxer of the 20-week competition.

Last Monday’s Fight Night 20 witnessed the highest attendance by boxing enthusiasts as the organisers had a difficult time limiting entry by the overenthusiastic crowd to ensure the Bukom Boxing Arena was not packed beyond its capacity.

With two Renault Kwid vehicles by Premium Motors up for grabs by the overall best boxer and the best gym, there was a lot of at stake and tension was expectedly high among rival boxers and their supporters.

And after 20 weeks of action, it was only fitting that Tetteh and Quaye, both managed by Imax boxing Promotion, sold out a 10-round thriller for National Featherweight Championship title.

Tetteh was the dominant boxer in the explosive contest even as Sea Vie Gym’s Quaye gave his opponent a stiff challenge. After 10 round of action, it was clear that Tetteh had done enough to establish his supremacy to win the title on a unanimous point decision as the judges scored the fight 99-91, 99-89 and 99-92 in his favour.

And when the ring announcer, Mohammed Amin-Lamptey declared Tetteh the winner, the arena turned into a scene of wild celebrations by his supporters as the fight brought down the curtain on 20 weeks of exciting league competition put together by Ghana Boxing Authority and Imax Media Group with sponsorship from De-Luxy Paints, Premium Motors, TCL, Imax Electronics, Max Buy and Tecno Phones.

Aryeetey was decorated with the title belt by boxing legend Azumah Nelson and Maxwell Takyi of Imax Media.

Despite encountering a challenge with his footwear which saw him fighting barefooted in the middle of his fight, Joseph Tagoe of Seconds Out Gym found the strength to defeat Attoh Quarshie Gym’s Michael Bibi in a six-rounds welterweight contest.

In the second bout of the night, Godson Amuzu of Charles Quartey Boxing Federation (CQBF) earned a second round knockout victory over Rocky Otoo of Fit Square Gym, with Otoo lasting just 59 seconds of the second round in their super-welterweight contest.

Alidu Sulemanu of Black Panthers Gym earned a third round technical knockout (TKO) victory over Yahaya Yusif of The Gym in a middleweight contest.