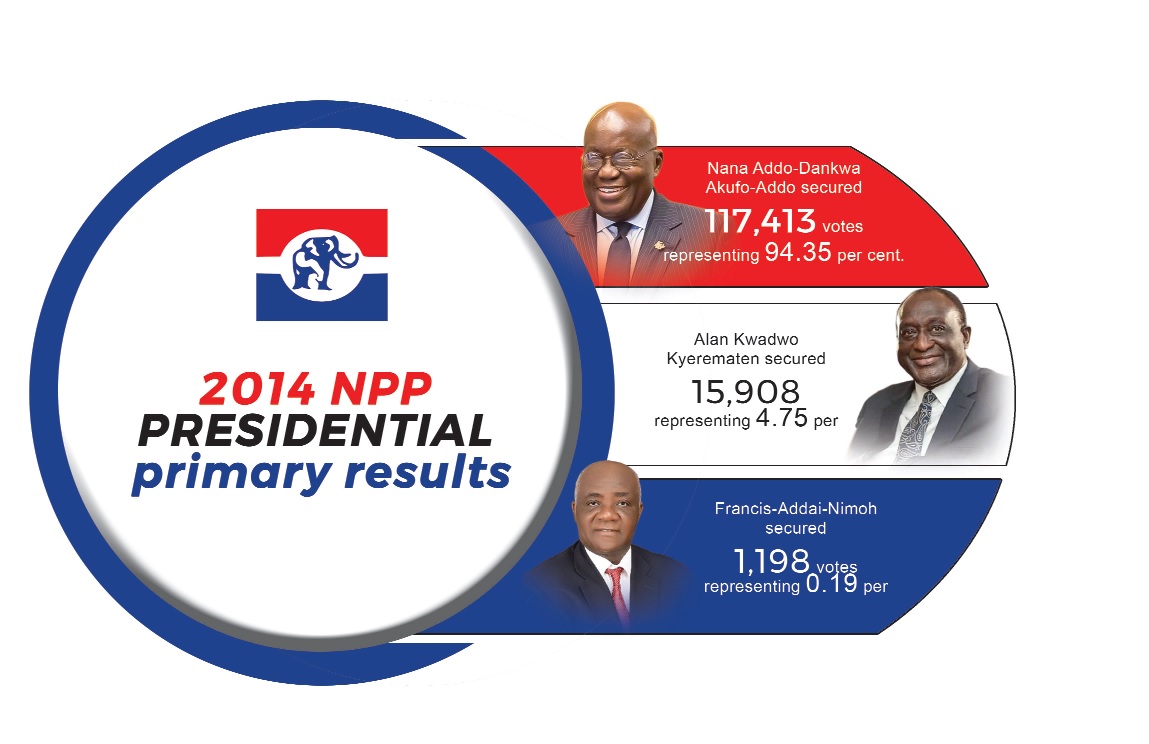 With about two years to the December 2024 general election, nine stalwarts of the ruling New Patriotic Party (NPP) are eyeing the flagbearership of the party.

Already, two of them have resigned their Cabinet positions to prepare and win the hearts and minds of party delegates.

The seven other contenders, all leading members of the NPP, are the Vice-President, Dr Mahamudu Bawumia; a former Minister of Energy, Boakye Agyarko; the Member of Parliament (MP) for Assin Central, Kennedy Ohene Agyapong, and a former Presidential Spokesperson and General Secretary of the party, Kwabena Agyepong.

The NPP is, however, yet to open nominations.

According to the General Secretary, Justin Frimpong Kodua, guidelines for the primary would be made public on Tuesday, January 31, this year.

The guidelines are to ensure free, fair and transparent processes, so that at the end of the day, those who will lose the presidential primary will know that they lost in a fair contest.

Meanwhile, the nine likely candidates have touched base with party faithful across the country with messages of hope, promises and assurances.

Some of them have also caused the erection of giant billboards carrying their pictures.

Although the National Council of the party is yet to fix a date and venue for the presidential primary, the aspirants are not leaving anything to chance as they criss-cross the country to enable them to win the slot.

According to Article 13 (1) of the NPP Constitution: "The election for the party’s presidential candidates shall be held not later than 24 months from the date of the national elections.

Mr Kyerematen, an economist and lawyer, served under former President John Agyekum Kufuor between 2003 and 2007 before his reappointment by President Nana Addo-Dankwa Akufo-Addo in 2017 till his resignation early this year to enable him to concentrate on his presidential ambition.

This will be the fourth time Mr Kyerematen is contesting the NPP flagbearership. The first was in 2007, the second in 2010 and the third in 2014.

He was the first runner-up in all the three contests.

The flagship One-District, One-Factory policy is one of the several brainchild propositions of the outgoing Trade and Industry Minister.

Dr Akoto holds a doctorate in Agricultural Economics from the University of Cambridge and had been Minister of Food and Agriculture since 2017 until his resignation in January this year to focus on his presidential ambition.

He is credited with the introduction of programmes such as the five modules of the Planting for Food and Jobs, Rearing for Food and Jobs, Planting for Export and Rural Development, agricultural mechanisation and the greenhouse technology, as well as the recruitment of 6,000 agricultural extension officers to beef up the system and the recruitment of more than 1,000 veterinary doctors, which is ongoing.

During his tenure, the contribution of the agricultural sector to Gross Domestic Product (GDP) increased from 20.1 per cent in 2016 to 21.7 per cent in 2021, before sliding marginally to 19.9 per cent last year, mainly due to the government’s inability to fund the fertiliser subsidy.

He was for two terms the MP for Kwadaso in Kumasi, Ashanti Region, starting from 2009. 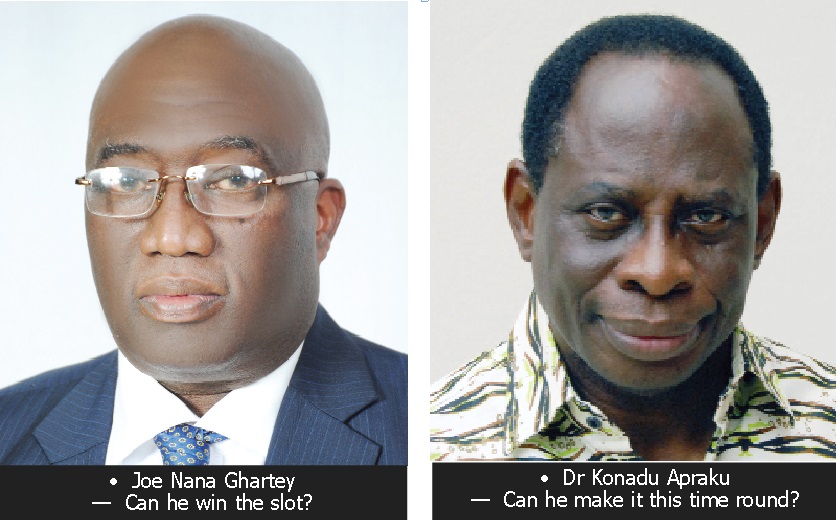 Dr Bawumia, an economist and banker, is the sitting Vice-President. He was a Deputy Governor of the Bank of Ghana until his selection as the running mate of the NPP’s presidential candidate, Nana Akufo-Addo, in the 2008 elections. He was maintained as the running mate for three consecutive times.

He was the lead witness for the petitioners in the 2012 Presidential Election Petition, which challenged the declaration of John Mahama as the winner of Ghana's 2012 presidential election.

Mr Agyepong is a civil engineer who also served as the Press Secretary to former President Kufuor from 2001 to 2006.

He was one of the 17 aspirants who contested the party's presidential primary in 2007, ahead of the 2008 general election.

Mr Ghartey is a lawyer and MP for Essikado-Ketan in the Western Region.

He is a former Attorney-General and Minister of Justice and once served as the Second Deputy Speaker of Parliament.

He is also the immediate past Minister of Railways Development.

Mr Agyapong, a businessman, is the incumbent MP for Assin Central in the Central Region.

He has been MP since 2000 and is the Chairperson of the Defence and Interior Committee of Parliament.

Mr Agyarko is a banker, economist, former Minister of Energy and founder member of the NPP in 1992.

He was appointed National Campaign Manager of the NPP in the 2012 presidential election and Policy Adviser to the presidential candidate of the NPP during the 2016 election.

Mr Addai-Nimoh is a development planner and civil engineer.

He is a former MP for Mampong in the Ashanti Region and contested the NPP's presidential primary in 2014 ahead of the 2016 elections and placed third.

Dr Apraku, an economist, is a former Minister of Regional Cooperation and NEPAD and also Minister of Trade and Industry in former President Kufuor's administration.

In 2008, he was appointed by the Economic Community of West African States (ECOWAS) Council of Ministers as the ECOWAS Commissioner for Macroeconomic Policy and Economic Research, where he was responsible for multilateral surveillance mechanism

Dr Apraku was also a member of the Second, Third and Fourth Parliaments of the Fourth Republic.

He was among the 17 aspirants who contested the flagbearer slot of the NPP in 2007 ahead of the 2008 elections.

Among the nine personalities eyeing the NPP flagbearership, it is only Mr Kyerematen who has formally declared his intention and also spelt out what he is bringing on board.

Consequently, he has unveiled a national development plan for the country, dubbed: the Ghana Transformational Plan (GTP).

The seven-point plan, among other things, seeks to provide a strong macroeconomic environment, a new agricultural revolution (NAR) for the country, industrial transformation, digital mainstreaming, energy security and diversification, decarbonisation and climate resilience.

The execution of the GTP, he said, would require the collective effort of every Ghanaian, irrespective of political orientation, ethnicity or religion, saying it would lead to a new dawn of restoration, rebuilding and reward.

The other eight leading members with interest in the presidential slot are yet to make official declarations but have made their intentions known.

The Assin Central legislator, Mr Agyapong, some time last year unveiled a campaign slogan for his presidential bid with the letters, PHD — Patriotism, Honesty and Discipline.

He is reported to have said the three attributes were key to moving the country forward and so they would be given priority in his government.

Dr Akoto, who seems not to be bothered by media analysis and projections, said he was working on the quiet.

He indicated his resolve to engage the delegates of the NPP, whom he described as the kingmakers, to convince them to vote for him to become the flagbearer, come 2024.

He has decided to keep his cool until he finally exits office on January 24, this year.

Mr Agyepong, who spoke with the Daily Graphic, said he believed it was time for the party to change the narrative and elect a new generational leader.

He said it was a new dawn for the party and for that matter delegates must elect someone who was selfless, ready to serve and also ready to sacrifice.

Mr Agyarko, in a brief remark, expressed satisfaction with the pace at which he was working, saying: “I am comfortable at the pace I am going.”

While many of the aspirants would strategically like to keep their cards to their chest and proceed, Mr Addai-Nimoh announced his intention to officially launch his ambition at a ceremony at the Ghana National Association of Teachers (GNAT) Hall in Accra on February 1, 2023.

Mr Ghartey, like some of his fellow aspirants who had been working on the quiet, took time to visit former President Kufuor at his residence last Thursday to inform him about his decision to contest the flagbearer position.

He gave an assurance that he would not conduct himself in a manner that would bring the NPP into disrepute.

Mr Ghartey also promised to run a clean campaign in a manner that would enhance unity in the party after the contest.

For his part, Dr Apraku told the Daily Graphic that he was on course and was relying on interpersonal relationships to attain his dream.

He said he had not shied away from the media, but that for now he was working on the ground, saying although the media hype was good, he was doing the interpersonal form of campaigning.

Dr Apraku said it was a personalised contest and, therefore, he would be interacting more with the delegates to sell his message to them and why they should vote for him to become the flag bearer of the NPP.

Unlike in 2007 when 17 leading members contested the party's presidential primary, the NPP Constitution has been amended to accommodate not more than five persons for the flag-bearer contest.

According to Article 13(9) of the NPP Constitution: "Where there are more than five contestants for nomination as the party's presidential candidate, a Special Electoral College shall cast their votes by secret ballot for the first five contestants to be short-listed."

At the end of the day, those who will be selected by the Special Electoral College will contest the flagbearer position.

In other words, it is one thing making a declaration, as it is the Special Electoral College that will determine who qualifies to contest the presidential primary.

With this, only time will tell who becomes the Election 2024 flag bearer of the NPP.