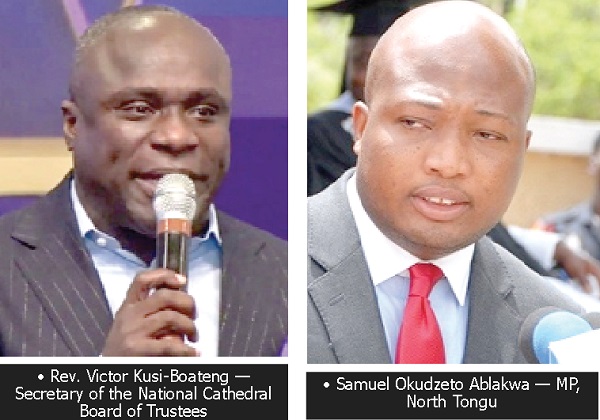 The Member of Parliament for North Tongu, Samuel Okudzeto Ablakwa, has petitioned the Commission on Human Rights and Administrative Justice (CHRAJ) to investigate the Secretary of the National Cathedral Board of Trustees, Reverend Victor Kusi-Boateng, over conflict of interest, including possession of multiple identities and other alleged criminal dealings.

The petition, which was received by the two Deputy Commissioners of CHRAJ yesterday, also alleged that there was a transfer of GH¢2.6million cash from the National Cathedral Secretariat to JNS Talent Centre Limited owned by Rev. Kusi-Boateng under his secondary identity, Kwabena Adu Gyamfi.

Mr Ablakwa, who confirmed the submission of the petition to the Daily Graphic yesterday, said the petition sought to invoke the mandate of CHRAJ under Article 218 of the 1992 Constitution to investigate the “odious conflict of interest” in regard to Rev.Victor Kusi-Boateng’s position on the national cathedral board as he “literally paid his own company a staggering GH¢2.6million for no work done”.

Rev. Kusi-Boateng, who is also the founder of Power Chapel Worldwide, according to Mr Ablakwa, was the same person as Kwabena Adu Gyamfi, who received the GH¢2.6 million from the national cathedral board.

“For the avoidance of doubt, there is no distinct Kwabena Adu Gyamfi. Kwabena Adu Gyamfi is a criminal creation of Rev. Victor Kusi-Boateng. The two are, therefore, one and the same,” Mr Ablakwa alleged in a statement on his Facebook wall that preceded the petition.

“From unassailable and irreproachable documents in my possession, Rev. Victor Kusi-Boateng, aka Kwabena Adu Gyamfi, uses multiple passports and multiple identification cards with different names and different dates of birth as his special modus operandi.

“When JNS Talent Centre Limited was being incorporated, he submitted a passport with the name Kwabena Adu Gyamfi. The passport’s number is G0886001. At the time, he claimed his date of birth was December 30 1969,” he said.

Another matter of interest for Mr Ablakwa is that “when the National Cathedral of Ghana was being incorporated on the July 19, 2019; Rev. Victor Kusi Boateng used his driving licence for the registration.”

According to the MP, deeper investigations expose a host of companies which Rev. Kusi-Boateng operates as Kwabena Adu Gyamfi.

As a result, Mr Ablakwa further demanded the resignation of the preacher from the Board as a show of commitment by President Nana Addo Dankwa Akufo-Addo.

Meanwhile, the Executive Director of the National Cathedral, Dr Paul Opoku Mensah, has in a statement refuted allegations of corruption and conflict of interest against the Secretary to the Board by the North Tongu MP.

Dr Opoku Mensah explained that the said amount which was paid on September 8, 2021, was a loan from a board member whose name he fell short of mentioning.

“So, this is not an illegal payment,” Dr Opoku Mensah stated.

“This is a documented trail that you can always ask for verification. If the MP does not understand an issue in the accounting, because in accounting somebody with an audited account cannot explain everything so they call you to clarify,” it said.

Dr Opoku Mensah’s statement added that “I really understand the political mistrust in our system, but nonetheless, particularly when it comes from Parliament, you expect a certain due process and when you are suspicious, you ask for verification and clarification.”