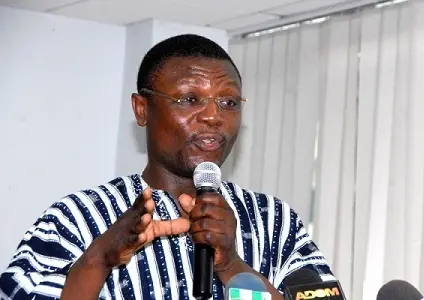 Member of Parliament for Buem in the Oti Region, Kofi Adams, has stated that the role the late former President Jerry John Rawlings played in boxing was enough evidence of his selflessness as a leader.

Adams said accounts of the May 15 and June 4, 1979 uprisings were indicative of Flt Lt Rawlings’ desire to protect the downtrodden as well as his anger at the abuse of the ordinary people.

The MP for Buem who made a statement in Parliament on Thursday June 23, to mark the 75th birthday of the former President, said the boxing roundtable organised by the J.J. Rawlings Foundation to celebrate President Rawlings’ birthday was noteworthy, likewise events in Accra and Nkwanta to mark the June 4 uprising.

“The exhibition and theatre performance at the Ghana Academy of Arts and Sciences was a great recollection, especially for the youth, many of whom are poorly equipped or have been misinformed on the role Chairman Rawlings played,” Adams stated.

Mr. Adams quoted extensively from an interview Azumah Nelson granted on President Rawlings and boxing, and stated that the likes of Ike Quartey, Nana Yaw Konadu, Alfred Kotey and Isaac Dogboe all passed through the hands of President Rawlings.

Flt Lt Jerry John Rawlings was a man of many parts, Mr. Adams said, adding it was heartwarming that he was being remembered with several events, statements and performances.

The Buem MP said: “It is also important that today’s theme is titled: ‘J.J. Rawlings’ Contribution to the Sport and the Way Forward’. In remembering him let us also take a cue and identify how best to add to his achievement in boxing and other spheres of life.”

The MP’s statement was greeted with significant support with members such as Atta Akyea of Abuakwa South, Augustine Tawiah of Bia West, Kobena Woyome of South Tongu, Afenyo Markin of Efutu, Annor Dompreh of Nsawam Adoagyiri and James Klutse Avedzi of Ketu North all making significant comments on their colleague’s statement.

Below please find attached the full text of the statement:

STATEMENT ON THE OCCASION OF THE 75TH ANNIVERSARY OF THE BIRTH OF FORMER PRESIDENT JERRY JOHN RAWLINGS BY KOFI IDDIE ADAMS, MP FOR BUEM. WEDNESDAY, JULY 22, 2022.

Mr. Speaker;
Former President Jerry John Rawlings, the first President of the Fourth Republic of Ghana would have been 75 today but for his unfortunate and sudden demise on 12th November, 2020.

The former President endeared himself to many for his charisma, sincerity, drive and patriotism. He was a simple man who did not allow the trappings of leadership to cloud his judgement and did not hesitate to embrace all, especially the masses who most of the time felt alienated from authority.

He was nevertheless Mr. Speaker a stickler for discipline and respect for authority and did all in his power to ensure that people who were committed to a project succeeded so long as they dedicated themselves with discipline. It is thus not surprising that he had a weakness for the pugilistic sport, boxing. And Mr. Speaker his relationship to the success story of Ghana’s greatest boxer, Azumah Nelson better tells the story.

Mr. Speaker, to mark his 75th birthday, the J.J. Rawlings Foundation organized a Roundtable discussion on the role President Rawlings played in boxing. It is noteworthy that this illustrious son of Ghana is being remembered through various forums for the significant impact he made on his country. It was remarkable that on June 4 there were events in Nkwanta in the Oti Region and Accra, that all eulogized the role of Jerry John.

The exhibition and theatre performance at the Ghana Academy of Arts and Sciences was a great recollection, especially for the youth, many of whom are poorly equipped or have been misinformed on the role Chairman Rawlings played.

Mr. Speaker, Remembering President Rawlings’ role in boxing is significant. It proves his selflessness and the fact he possessed that character trait long before he became President. Accounts of the May 15 and June 4 1979 actions clearly indicate his desire to protect the downtrodden and his anger at the abuse of the ordinary people by political authority and well-to-do business people.

Mr. Speaker, Azumah Nelson recounts his knowledge of President Rawlings with such candour:

“When I was a teenage boxer, the Ghana Army used to attend World Military Games. There was this US boxer who always beat everyone every year. Even though I wasn't an army member, the Army drafted me into the Ghana Army Boxing Team for the Games so I could stop the guy.

“Whiles we camped at the National Training School, one young military man would always be cooking yam for us. Times were really hard in Ghana that we struggled to get food to eat. When the military man went out to get the yam, we would usually eat without stew.

“This young man will again go in search again. Then he'd come back with beans. He cooks and we eat. In the night, we the amateur boxers in camp will be asking ourselves where he got the beans. He never told us.

“Early in the morning, whiles we set out for training, he would come to us. By the time we return from training, he'd have cleaned our rooms and mopped the place.

“We got astonished how a military man could do that.

“When we asked him to leave the cleaning for us, he'd say no. He tells us we are going to serve Ghana so he needed to serve us. These were times that people dreaded an encounter with a military man. We were all shocked.

“One day, I approached him and suggested to him that I wanted to join the army. He looked me in the face and said no. He told me the spirit in me is beyond the military so I should stick to boxing because that's where my greatness will come from". I heeded to his advice.

“Years later, I came to learn that he had been going to the Osu Castle to borrow beans for us on his own accord. We only got to know about this when the debt piled up and he had to go and pay. We were not getting beans again. But he was always with us.

“When we returned from one of our fights abroad, there had been a coup and I realized he was the one who plotted it. He had taken control over the whole country. At that age?

“To be honest I was least surprised. He was so selfless and didn't want people to be cheated. People can have other opinions about him but I got to know him from times he was unknown, and I always felt his desire". - Azumah Nelson, talking to sports Obama about H.E Flt Lt Jerry John Rawlings.

Mr. Speaker, the former professional boxer who had a life-long relationship with the former President could not have described him any better.

The former President committed himself not only to the development of Azumah Nelson, but to a lesser extent the likes of Ike Quartey, Nana Yaw Konadu, Alfred Kotey, Isaac Dogboe and recently Bukom Banku, who wept bitterly when President Rawlings passed.

Flt Lt. Jerry John Rawlings was a man of many parts and it is heart-warming that we are remembering him through several events, statements and performances.

It is also important that today’s theme is titled: ‘J.J. Rawlings’ Contribution to the Sport and the Way Forward’. In remembering him let us also take a cue and identify how best to add to his achievement in boxing and other spheres of life.

Thank you Mr. Speaker for the opportunity.