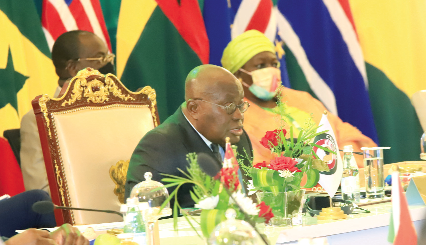 The Chairman of the Authority of Heads of State and Government of the Economic Community of West African States (ECOWAS), President Nana Addo Dankwa Akufo-Addo, has entreated colleague Heads of State of the regional bloc to ensure the stability and defence of the democratic values in their respective countries.

On the prevailing political crises in Mali and Guinea, he urged members to proffer durable solutions to the impasse, saying: “I am confident that, as in the past, we will rise to the occasion.”

President Akufo-Addo was speaking at the opening of the second extraordinary summit on the political crisis in Guinea in Accra yesterday.

The summit, which was held behind closed doors, also discussed the current situation in Mali.

Also present were the Vice-President of Nigeria, Prof. Yemi Osinbajo, and three Foreign Ministers who represented their Heads of State.

President Akufo-Addo described the attendance as a clear manifestation of the solidarity and commitment of the ECOWAS community to democracy, peace, prosperity and unity of the region.

Recounting the activities that took place after the coup in Guinea, he said the bloc, in a virtual meeting, decided to immediately dispatch a high-level ECOWAS delegation to assess the situation in that country on September 10, 2021.

The delegation, led by Ghana’s Foreign Minister, Ms Shirley Ayorkor Botchwey, and comprising the President of the ECOWAS Commission, Mr Jean-Claude Brou, and the Foreign Ministers of Burkina Faso and Togo, met the military leaders and also visited the ousted President Alpha Conde in detention.

The President said the report of the mission was the basis for their deliberations yesterday.

The meeting also reviewed a report by the mediator of the Malian crisis, former President  Goodluck Jonathan of Nigeria.

On September 5, 2021, Guinea’s special forces, led by Colonel Mamady Doumbouya, staged a coup and removed the third-term President of the country, Prof. Conde.

ECOWAS, subsequently, condemned the action of the junta, suspended Guinea from its decision-making body and also called for the immediate release of the incarcerated 83-year-old President and the restoration of the constitutional order in that country.

Other organisations, such as the United Nations and the African Union, have also condemned the coup.