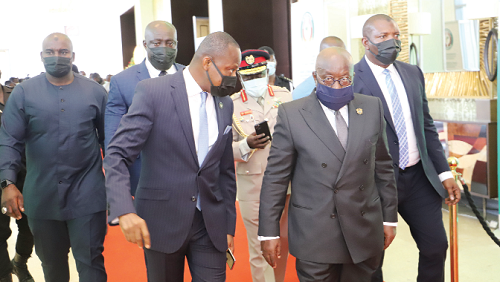 President Akufo-Addo on his way to the ECOWAS meeting

The Economic Community of West Africa States (ECOWAS) has placed a travel ban on all the members of the military junta in Guinea and their immediate family members.

In addition, the regional political and economic bloc has placed a freeze on the financial assets of the coup makers and their immediate family members.

This was disclosed last night by the President of ECOWAS, Mr Jean-Claude Kassi Brou at a news conference after the Second Extraordinary Summit on the political crisis in Guinea at the Kempinski Gold Coast Hotel in Accra .

Conde was detained on Sunday September 5 by soldiers led by Col. Mamady Doumbouya, who announced the coup on state television.

Addressing the nation on Guinea’s public broadcaster RTG, the junta leader said the ousted President was safe and in custody.

“We have taken all measures to ensure that he has access to health care and he is in contact with his doctors. Everything will be fine,” Col. Doumbouya said.

The ECOWAS President said the junta had also been urged to return the country to multi-party rule within the next six months.

He said the time table to return the country to democratic rule in 2022 was non-negotiable.

Already, the National Committee for Rally and Development, military administration in place, has vowed to restore democracy in the West African nation, but no timelines have been given.

He also disclosed that during the recent visit to Guinea by the high level delegation led by the Ghanaian Foreign Minister, Ms Shirley Ayorkor Botchwey, the Guinea junta asked for support from ECOWAS to return to democratic rule.

Consequently, he said, ECOWAS was ready to help the junta return the country to democratic governance.

Conde, 83, was re-elected for a third term in October 2020 in polls marred by violence.

He first came to power in 2010 in a vote seen as the first democratic election since the former French colony gained independence.