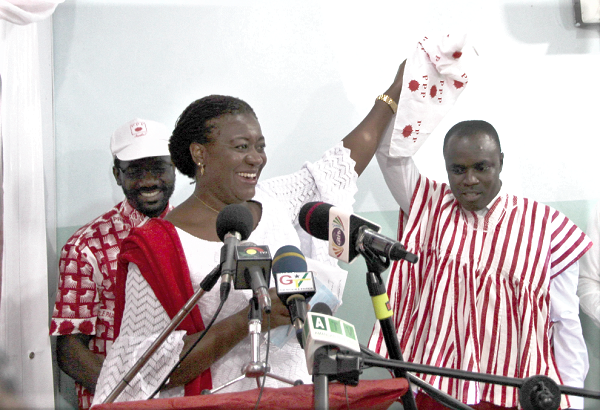 Mr Siaw will partner the party’s flag bearer, Ms Brigitte Dzogbenuku, with the responsibility of delivering victory for the party in the December polls.

Speaking at the unveiling ceremony in Accra on Saturday, Ms Dzogbenuku described Mr Asamoah-Siaw as a “brilliant, well-read, dynamic and well-qualified running mate” to restore hope to Ghanaians in the upcoming general election.

“He is very humble, ready to listen and is in touch with the needs of the people of Ghana. He and I share a lot in common,” she added.

Mr Asamoah-Siaw expressed gratitude to Ms Dzogbenuku for her confidence in him, adding that “I understand the important responsibilities that come with that role. I believe our flag bearer can and will lead this country’s transformation with great vision, boldness, decisiveness, selflessness, compassion for all and above all, with an unparalleled sense of patriotism which seems to have been lost in our land.”

The party also launched its Election 2020 manifesto which gives a blueprint of the party’s vision when it comes to power.

Mr Asamoah-Siaw said the PPP had the most credible set of policies for fundamental changes and reforms to strengthen the foundation of Ghana’s democracy and guarantee economic growth for the prosperity for all.

Mr Asamoah-Siaw said the PPP’s strategy was to introduce customer service and accountability to public service from the presidency to the last public servant in the country.

According to him, an empowered people in an enlightened society where leaders were transparent and accountable for their stewardship was the surest way to get Ghana out of relative poverty to inclusive democracy.

“We stand for making state institutions respect the citizens at all levels so that citizens do not have to beg and pay bribe to any public officer to access any public service. All public servants must and will treat citizens with respect, dignity to build the trust and confidence of the citizens as equal partners in our collective effort towards a dignified and disciplined society,” he said.

Touching on health, Mr Asamoah-Siaw said a PPP government would allocate one per cent of Ghana’s GDP for the prevention of diseases such as malaria and cholera.

He also promised zero duty on imported ambulances to afford private companies the opportunity to easily operate ambulance services to save lives.

“We will also promote the construction of care houses and close down witch camps. We will promote investment in health and fitness facilities to reduce the incidence of diseases such as hypertension and diabetes,” he added.

On infrastructure, Mr Asamoah-Siaw promised the construction of underground railway lines for inner city travels as that would make shuttling in the city easier and faster.

He also promised the construction of adequate sewerage and drainage systems and the completion of all affordable housing projects.