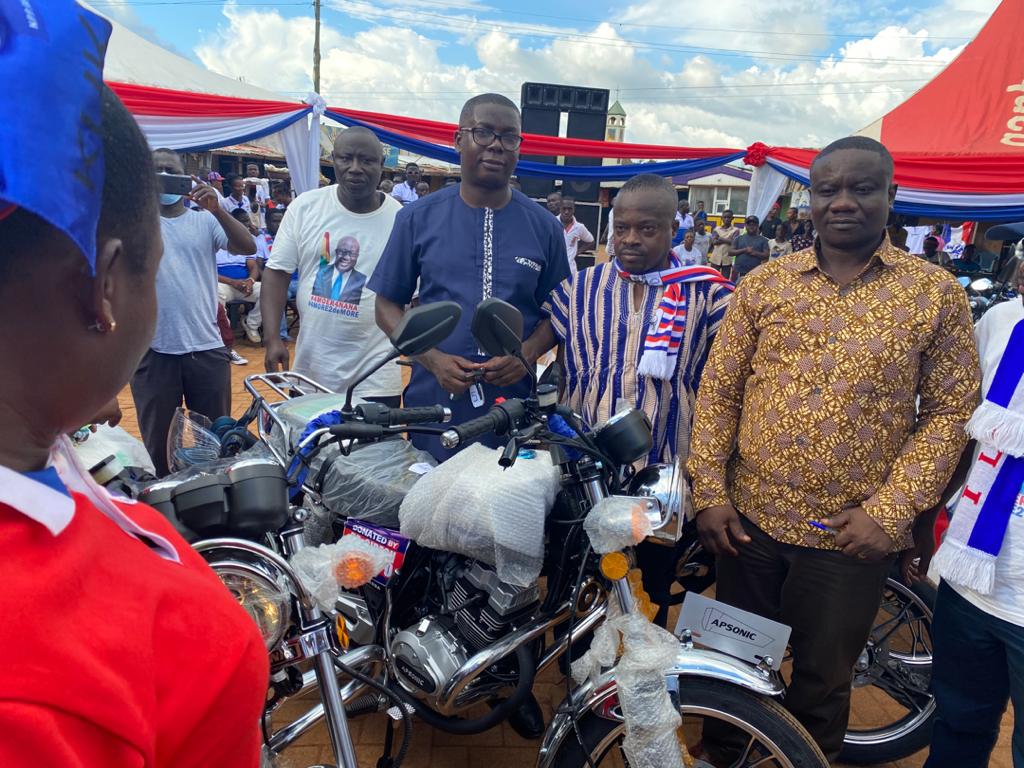 The Economic Advisor and Spokesperson to the Vice President Dr Gideon Boako has donated a Toyota pick-up and 10 motorbikes to support the election campaign of the New Patriotic Party (NPP) in the Tano North constituency in the Ahafo region.

The donation is to ensure effective day-to-day operations of tNPP in the constituency.

Dr Boako said the donation was to help facilitate the work of the executive and other party members who were handicapped in terms of transportation to help them to achieve their objective of retaining the parliamentary seat and gaining a landslide victory for President Akufo-Addo in the crucial December general elections.

The Toyota pick-up and the 10 motorbikes were presented to the constituency at a colourful ceremony organised at Duayaw Nkwanta on Sunday.

Dr Gideon Boako who is a campaign team member for Ahafo region has already donated 10 motorbikes to the Ahafo Regional Secretariat of the party for onwards distribution to the various constituencies.

"Do not only tell them what we plan to do for the nation but also tell them what we have already done including the various social interventions undertaken by the government in the past three years which are readily evident on the ground to testify to the party's commitment, dedication and determination to development in unity and freedom "he added."

The Constituency Chairman for Tano North, Nana Afodwo Bonsu received the vehicle and the motorbikes on behalf of the constituency and expressed profound gratitude to Dr Boako for the kind donation.

He noted that the donation formed part of many interventions Dr Gideon Boako, who happens to be a native of the constituency, has fulfilled towards his bid to maintain the Tano North seat and increase the presidential votes in the upcoming elections.

He averred that, the donation is very timely as campaigning was becoming intense and it's much welcome as it will, undoubtedly, go a long way to augment the party's efforts ahead of the elections and enhance it's operations.

Earlier in the day, Dr Boako joined the youth at Bomaa to participate in a health walk and subsequently inaugurating the Youth Wing of the party in the area.

Dr. Boako a few months ago also donated ten motorbikes to the Ahafo Regional NPP Party to enable them work effectively for victory in elections 2020.