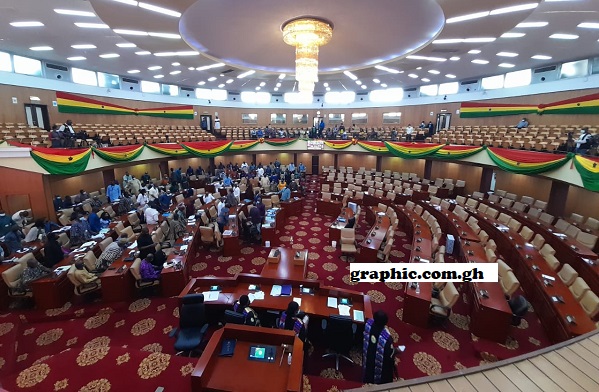 Parliament has voted against the 2022 Budget Statement and Economic Policy for the government.

This was after the House concluded a debate on the Budget on Friday evening [Nov 26, 2021] and the Majority side walked out of the Chamber.

Through the voice vote, the House rejected the Budget when the Speaker asked the question, a few minutes to 8pm on Friday.

The Majority side had walked out of the Chamber and so when the Speaker put the question for those in favour or against, the "No" voice votes had it and there was no "YES" voice vote.

After the Minority and Majority leaders took their turns to conclude their debate, the Minister of Finance, Mr Ken Ofori-Atta also had an opportunity to make an appeal to the House on the Budget.

An agitation followed after a request by the Minister of Finance to the Speaker to allow him meet both leadership of the House prior to a question being put for the approval of the Budget Statement was declined by the Speaker.

While the Majority agreed to the Minister of Finance's request, the Minority kicked against it vehemently.

The Speaker therefore told the House he would put the question for the House to vote on whether the minister should meet the leadership of the House or not.

Graphic Online's Parliamentary correspondent, Nana Konadu Agyeman reports that Majority members walked out of the Chamber following a failed attempt to have the Speaker direct the General Secretary of the National Democratic Congress (NDC), Mr Johnson Asiedu Nketia, out of the Public gallery.

Mr Nketia, who is a member of the Parliamentary Service Board, was in the Public gallery to witness the voting process ahead of the approval of the 2022 Budget.

The agitation by the Majority members was from the fact that the Speaker had earlier directed the Marshals of Parliament to drive out ministers of state who were in the House and were not Parliamentarians.

In the view of the Speaker, the ministers were not required to take part of vote by division and therefore needed to leave the Chamber.

The Speaker's order came after the Minority Chief Whip, Mr Mohammed-Muntaka Mubarak, had prayed the Speaker to order out ministers of state prior to the vote by division.

In the absence of the Majority members in the Chamber, the Speaker put the question on whether the Minister of Finance should be allowed more time to consult with the leadership of the House before the question for the vote.

Those against that request of not allowing the Minister of Finance more time to consult with the leadership were 137 as there was a nil vote for those in favour of the request.

The Speaker then proceeded with the question for the motion, for those in favour of the approval of the Budget Statement and Economic Policy for the government for the year ending December 31, 2022, and there was no approval voice vote as the Majority side had empty seats.

When the question for those against was posed, the Minority side responded with a loud "No" voice vote.

The Speaker then went ahead to announce that, "Honourable members, clearly the 'NOs' have it and it is is accordingly lost".

"Honourable members, early in the days after my election as the Speaker, I did pledge to the good people of this country, truly, that I will do everything within my power not to obstruct government business."

"I did so expecting reciprocity that government will also do everything not to frustrate or obstruct the business of Parliament. As the Speaker, I will do all I can, not to allow government to obstruct or frustrate Parliament in its lawful duty," Mr Bagbin said.

Mr Bagbin said it was a new beginning where "for the first time a majority has walked out from its own business."

Read also: 'Machoism, illegalities' by Speaker will not be tolerated - Majority

Meanwhile, the Public Affairs Directorate of Parliament has issued a press statement on the development in the House on Friday.

Below is a copy of the statement. 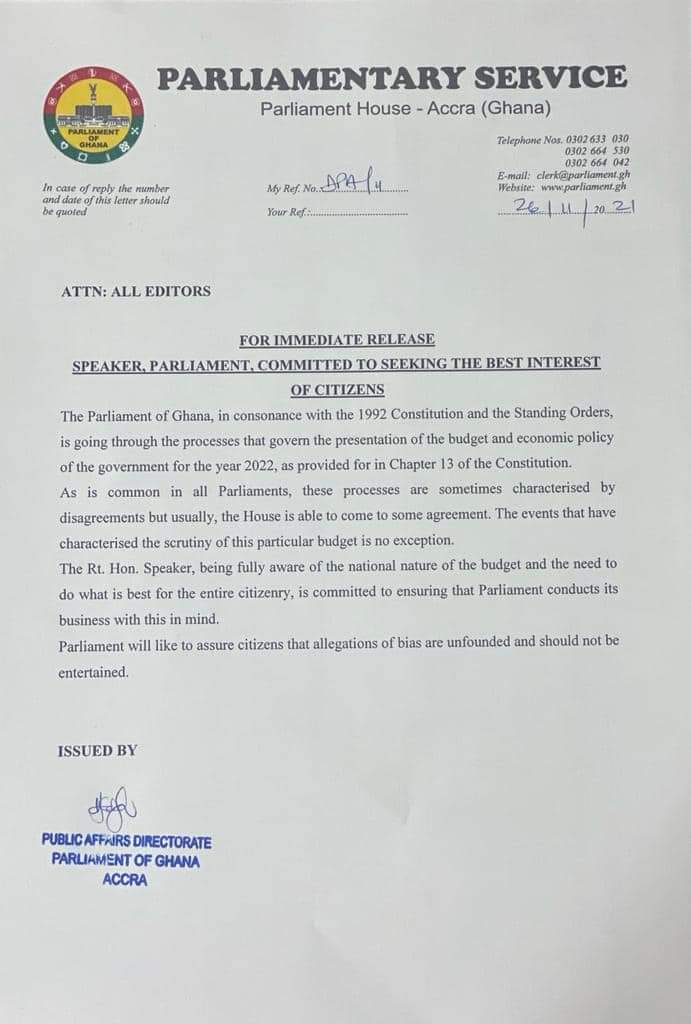 Watch a video of Friday's proceedings