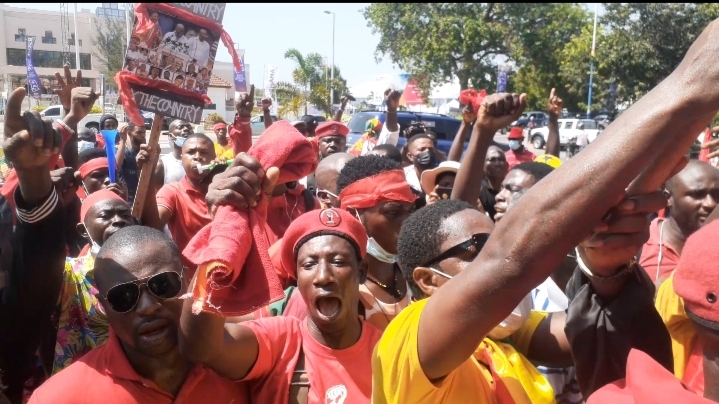 Hundreds of youths from a number of pressure groups on Friday converged in Accra to protest against the approval of the 2022 Budget.

Rallying behind a #StopTheBadBudget” clarion call, the protestors who were clad in red attires said the 2022 Budget holds no future for the country and its youth, warning that there will be consequences for the two dominant political parties – the New Patriotic Party, and the National Democratic Congress – at the next general elections if it was approved by Parliament.

“It’s a bad budget, and the NDC should stop it,” Ernesto Yeboah of the Economic Fighters' League, one of the groups at the protest told Graphic Online.

Other groups that participated in the protest were the #FixTheCountry Movement and the Coalition for Ghana's Independence Now.

He said not only does the budget portends hopelessness, it also introduces bad taxes and programmes that will further impose hardships on the Ghanaian people, fail to curtail allocations to the executives, judiciary and parliament.

He also lamented that the budget did not make provisions for addressing the recent devastations caused by tidal waves in Keta.

Asked what specifics in the budget the protestors wanted to see addressed, Ernesto Yeboah said: “From the E-taxes to the closure of the tollbooths and what is sad about that thing is that you have physically challenged people in their majority employed in those spaces, you don’t pay them for six months, then you come to parliament to shut down their places of work.

"How wicked can you be, what, just for political points? It’s a bad budget, and then we see the attempt to present us with a new NABCo, or what they call MASLOC, they have rebranded it into a different name. We know from our recent history that those things haven’t worked and it’s not going to work so why are they lying to us? Why are they seeking to waste the public purse again? Because this monies will go to themselves and their party foot soldiers and then nothing happens.”

The protestors were stopped by the Police at the entrance of Parliament.

The Police insisted that only a select few of the leaders would be allowed to present their petition to Parliament.

However, the protestors declined the arrangement, saying it had previously been agreed with the Police that if the protestors numbered less than 500, they would be allowed to enter the gates and meet with the leadership of Parliament or their representatives.

They stressed that since they (the protestors) were less than 500, the agreement should be respected.

Eventually, only five of them were allowed entry into the premises of Parliament to present their petition to the House but they were unable to make the presentation.