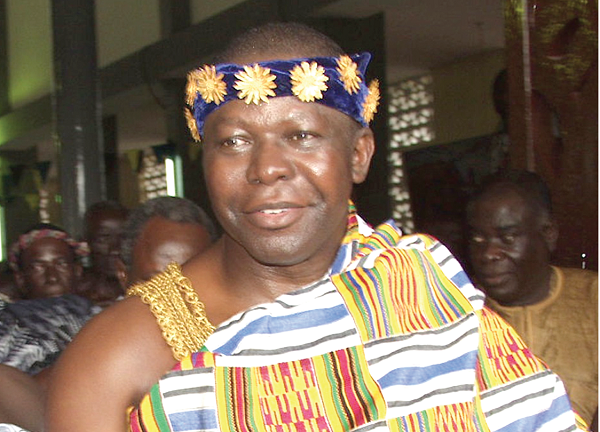 The Asantehene, Otumfuo Osei Tutu II, has called on the Maltese government to bring its rich expertise in the services sector and financial resources to bear on Ghana through investment for the mutual benefit of the peoples of both countries.

He said aside from being the oasis of peace, socio-political stability and democratic icon in the West Africa sub-region, the country abounded in rich human and natural resources and an enabling environment that enhanced partnership and investment growth.

Otumfuo, who made the call when he had bilateral talks with the President of Malta, Ms Marie-Louise Coleiro Preca, at the Presidential Palace in Malta in Europe at the weekend, added that Ghana was not only beautiful but endowed with enthusiastic people and businesses which were ready to partner Malta for a win-win collaboration.

Otumfuo and his large entourage of chiefs, drummers, horn blowers and traditional poets were in Malta at the invitation of the President of Malta to grace the Fifth Mediterranean Tourism Forum. Otumfuo’s delegation to the palace included Chairman of the Council of State, who is also the Omanhene of Juaben, Ambassador Nana Effah-Appenteng, the Omanhene of Bompata, the Minister of Tourism, Mrs Catharine Afeku, and Ghana’s High Commissioner to Malta, Mrs Mercy Bampo Addo.

With a small population of less than 500,000, the European Union (EU) country has grown its economy into a developed nation through the services sector, particularly marine, finance, tourism, software development, among others.

The 2017 IMF Mission Concluding Statement on Malta states that “Malta’s economic growth remains one of the strongest in Europe, reflected by rapid income convergence towards the European Union average.”

Otumfuo commended Malta for its investment drive and great progress in the services sector, especially in the area of financial services, and stated that Ghana was looking forward to replicate same and serve as the financial hub of West Africa and urged the government and people of Malta to direct their attention to Ghana.

He noted that Ghana abound in worthy business partners, highly skilled and well-educated people with a great and enthusiastic workforce that would ensure that the country’s potential was realised to advance its much-needed progress. He, therefore, called on Malta to take advantage of the country’s rich resources and invest in Ghana.

The Asantehene stated that he had read and heard about the strides the Maltese had made in the area of education and healthcare delivery and said those same sectors were among the critical areas that the government had set its eyes on, adding that Ghana would welcome the Maltese experience and support in advancing the pace of progress.

He said he was aware that lottery came from Maltese to Ghana but added that this time around, Ghanaians were looking for investments and support from Malta in other areas such as financial sector development, health, tourism and education, especially in the vocational and technical areas, among others.

The President of Malta, Ms Marie-Louise Coleiro Preca, assured Otumfuo of her government’s support in ensuring that Ghana continued to remain a shining star of peace, stability and democratic best practice for other African countries.

She commended the government of Ghana and Otumfuo for the warm reception and great Ghanaian hospitality they offered her during her visit to Ghana last year, an experience, she said, had had a great impression on her and brought back fond memories of Ghana.