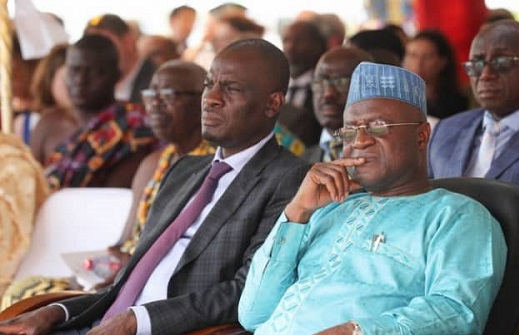 The Speaker of Parliament Alban S.K. Bagbin has urged Members of the Eighth Parliament to desist from confusing the public over the leadership of the two groups in the house.

Speaking in Parliament today, Right Honourable Bagbin stated that Osei-Kyei-Mensah Bonsu was the Majority Leader and Haruna Iddrisu was the Minority Leader.

The Speaker's latest declaration on the composition of the House comes a week after he declared that the New Patriotic Party (NPP) caucus in Parliament together with the independent Member of Parliament for Fomena, Andrew Asiamah Amoako constitute the Majority Group in Parliament.

That declaration followed an official letter from Mr Asiamah Amoako to the Speaker in which he stated that he will do business with the NPP caucus in Parliament led by Kyei-Mensah-Bonsu.

The Speaker before his declaration said the House has granted the request of the Fomena MP to do business with the NPP caucus in the Eighth Parliament.

The decision of the Fomena MP gives the NPP which has the same number of seats (275) as the opposition National Democratic Congress (NDC) an edge of one when it comes to Parliamentary business.

Meanwhile, the two major political parties — the NPP and the NDC - are in various High Courts disputing the results of some Parliamentary polls and have filed eight election petitions each.

With regard to the NPP, the seats in contention are Techiman South, Hohoe, Tano South, Tarkwa Nsuaem, Essikado Ketan, Tema West, Zabzugu and Sefwi Wiawso.

Two — Kintampo North and Assin North — relate to the eligibility of the elected MPs, while the remaining two — Hohoe and Buem — have to do with a decision by the Electoral Commission (EC) not to allow the people of Santrokofi, Akpafu, Likpe and Lolobi (SALL) to vote in the parliamentary election.