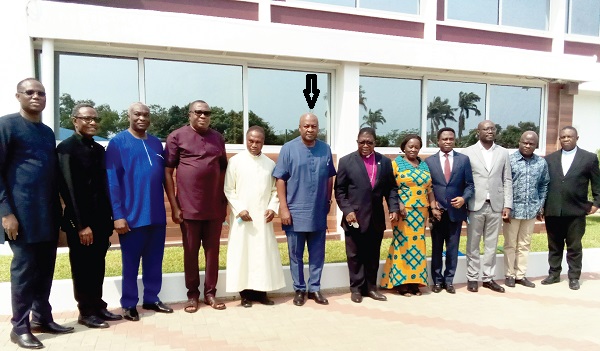 Former President John Mahama has stated that the National Democratic Congress (NDC) and the Minority in Parliament will avail themselves of any national dialogue to solicit solutions to transform the country’s economic challenges.

He said the NDC and its parliamentarians would put the country’s growth and development above personal and partisan interest to ensure that citizens lived in peace and harmony.

According to him, the opposition was willing to sit with the government to trade ideas on how to adopt the right strategies to change the fortunes of the country for the better.

Mr Mahama gave the assurance when he met with the leadership of the Christian community at his office in Accra yesterday.

The Chairman of the NDC, Mr Samuel Ofosu-Ampofo, who was at the meeting and briefed the media, said the meeting centred on a wide range of national issues some of which were not meant for public consumption.

Some stalwarts of the NDC, including the 2020 running mate of the former president, Prof. Naana Jane Opoku-Agyemang, and the Ranking Member on the Finance Committee, Dr Cassiel Ato Forson, were part of the meeting.

Also at the meeting were representatives from the Ghana Catholic Bishops’ Conference (GCBC), the Christian Council of Ghana (CCG) and the Ghana Pentecostal and Charismatic Council (GPCC).

Mr Ofosu-Ampofo noted that the meeting bordered on governance, the national economy and the way forward to dealing with the challenges.

“We had a very successful meeting but frank discussions which border on a variety of issues, all in the national interest,” he said.

He indicated that deliberations on some of the issues discussed at the meeting would continue among the various concerned groups to ensure that the solutions that would be adopted would have the blessings of the whole country.

For his part, Dr Forson said the country was not in a good position and a national dialogue that solicited ideas from all groups was extremely important in the country’s recovery agenda.