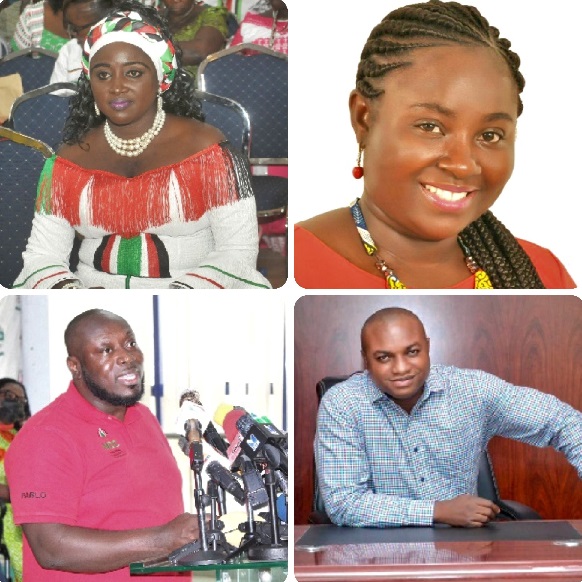 The University of Cape Coast (UCC) will buzz with activity tomorrow as delegates of the National Democratic Congress (NDC) converge on the campus to elect the party’s National Women’s Organiser and Youth Organiser and their deputies to steer the affairs of the party for the next four years.

Already the venue for the women and youth conferences of the party is awash with the posters of the various aspirants contesting for the positions.

Some of the banners were still being erected and posted when the Daily Graphic visited the venue — the new examinations hall of the UCC.

As at 3.30 p.m. yesterday, the time of the visit, a few delegates had arrived.

If how big a banner is was the determinant of who wins elections, one could confidently say Brogya Genfi has already won.

Campaign banners of Margaret Ansei, who is gunning for the position of women’s organiser, is also boldly displayed.

The Chairman of the NDC’s National Congress Planning Committee, Alex Segbefia, at a media briefing in Accra last Monday, said the party's reason for choosing Cape Coast to host its women and youth conferences was because it held its first National Delegates Congress 30 years ago at the same venue.

“On the party's 30th anniversary, we thought it was only appropriate to go back to where we actually started,” he told the media.

The contests for both the Women and Youth Organiser positions are two horse races between the incumbents and their sole contenders.

The incumbent Women Organiser, Dr Hanna Louisa Bisiw, is being challenged by a former Municipal Chief Executive (MCE) for Suhum, Margaret Ansei, while the incumbent Youth Organiser, George Opare Addo, would slug it out with the Ashanti Regional Youth Organiser of the NDC, Brogya Genfi.

About 1,375 delegates are expected to attend the conference from all the 275 constituencies across the country.

They include 235 from the Ashanti Region, 115 from the Central, 165 from the Eastern, 170 from the Greater Accra, and 90 each from the Volta and the Northern regions.

The Chairman of the Local Organising Committee (LOC) of the elections, Dr Vincent Assanful, in an interview with the Daily Graphic, said the region was ready to host the delegates.

“We have all the major logistical works done and working on the finishing and we are hoping for a beautiful conference,” he stated.

He said he was sure some other contenders for the various national positions were likely to pass through the list but they were not confirmed yet.

He urged delegates not to do anything that would mar the beauty of the conference.

“In the end, someone must win and we must not do anything to mar the beauty of the conference or bring the name of the party into disrepute. In the end, the party must be the winner and come out stronger,” he stated.

Meanwhile, the Central Regional Police Commander, Deputy Commissioner of Police, Alex Amenyo, said the police were ready to provide adequate security for the conference to ensure it was peaceful on.

“We are deploying enough personnel with support from some units in Accra, so I can say that we are ready in terms of ensuring adequate security for the period of the conference,” he stated.

The Regional Directorate of the Electoral Commission has also expressed its readiness to conduct and supervise the election on behalf of the party.