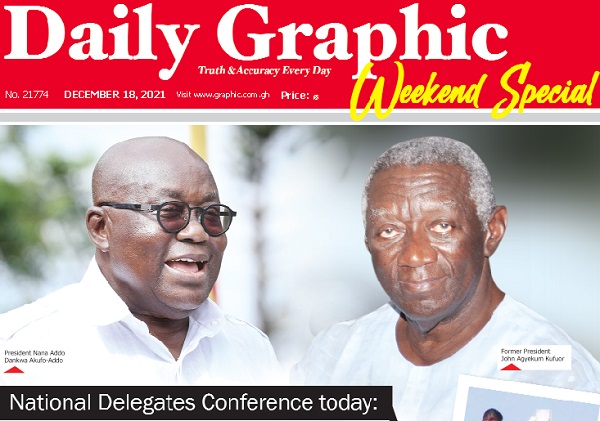 There will be no room for misconduct as surveillance cameras have been installed at strategic positions at the Heroes Park at the Baba Yara Stadium in Kumasi, the venue of the two-day conference of the New Patriotic Party (NPP).

Similar surveillance cameras have also been mounted at the Kwame Nkrumah University of Science and Technology (KNUST) campus, where the delegates will be lodging.

In all, 400 surveillance cameras have been installed, according to a member of the Local Organising Committee in charge of Operations and Grounds, Mr Kwabena Nsenkyire.

Additional streets lights have been fixed to illuminate the grounds to ensure maximum security.

The conference is on the theme: NPP: Our resolve, our determination and commitment to Ghana’s development.

Today, more than 6,000 delegates of the party are expected to converge on the park to deliberate on a number of issues that the party believes will enable it to break the eight-year cycle.

Other measures that will be taken include proposals for constitutional amendments.

The deliberations will further set the stage for the election of polling station, electoral area co-ordinator, constituency, regional and national office positions from January next year.

A visit to the venue by the Daily Graphic team saw the conference grounds decorated with party flyers, with some artisans putting finishing touches to the giant dais that had been set up.

Across many parts of the metropolis were flyers of the party, including on major roads in Greater Kumasi, especially those leading to the Baba Yara Stadium, the venue for the conference.

Major roundabouts such as the Airport Roundabout, Santasi and Suame, as well as the Sofo Line Interchange are all inundated with NPP flyers and billboards.

Mobile lavatories have been provided at vantage points at the grounds while public address systems had also been put in place to enhance all-round information delivery to the participants during the programme.

Some security personnel had also been deployed ahead of the preparations to ensure maximumsecurity for delegates.

More than 180 security personnel, including uniformed and plain-clothed officers and men, would be deployed during the conference, Mr Nsenkyire told the Daily Graphic

The Daily Graphic also saw some traders who had pitched camp and were sleeping in preparations towards the once-in-a- year activity.

Other speakers will be Vice-President Dr Mahamudu Bawumia, the National Chairman, Mr Freddie Blay; the General Secretary, Mr John Boadu; the National Treasurer, Mr Kwabena Abankwa-Yeboah, while there will be solidarity messages from invited political parties and other foreign dignitaries.

Members of the National Executive Committee, Ministers of State and the NPP Members of Parliament (MPs) will attend the conference.

Each constituency will be represented by 17 executives, 10 members of the regional Council of Elders and patrons, including the regional executive, are expected to participate in the conference.

Metropolitan, municipal and district chief executives (MMDCEs), 12 delegates from each of the party’s external branches, as well as the various wings of the party, notably the NASARA, the women and the youth wings which operate under the National Youth Organiser, will also attend.

As part of the conference, all delegates are to show proof of COVID-19 vaccination before being allowed entry to the conference grounds.

The party has also made arrangements for vaccination officials of the Ghana Health Service (GES) to mount stands to vaccinate and issue certificates to those yet to be vaccinated.

Meanwhile, many campaign posters of aspirants of national office positions and the flag-bearer position of the party, have also been removed in line with a party directive.

It is, however, unclear whether there would be surprise campaign groups of such aspirants during the conference.

There will be no elections at the conference.

The General Secretary of the party, Mr John Boadu, told the Daily Graphic the party would come out of the conference much united and stronger.

He called on Ghanaians to put their trust in the NPP as it had the best of interventions to transform their living conditions.

Although more than 200 proposals were made for constitutional amendments, the Constitutional Review Committee of the party, under the chairmanship of Mr Alexander Afenyo-Markin, whittled them down to 91.

The proposals include membership, disciplinary and grievance procedures, polling station organisation, constituency reorganisation through to the national level.

It also covers the selection of parliamentary candidates, election of presidential candidates and special organisations of the party.

The Daily Graphic can confirm that not all the motions would be moved as the conference will seek clearance for the National Council to review and adopt the constitutional amendments.

In line with that, a special motion would be tabled for the National Council to act on the other motions.

The proposals include barring MMDCEs, constituency and regional officers from contesting in parliamentary primaries where the party has a sitting MP except where the MP is not seeking re-election.

Another proposal is to amend Article 14 (2) of the party’s constitution for the election of the leadership of the parliamentary group two weeks after the declaration of the general election results.

In a related development, the National Road Safety Authority (NRSA) has urged the planning committee of the conference to put in place safety measures to ensure the safety of motorists, passengers and pedestrians during the conference.

It cautioned drivers and participants to plan their journey and avoid driving when tired.

A statement issued by the NRSA and signed by its Head, Corporate Affairs, Madam Pearl Adusu Gyasi, reminded the delegates that the Ashanti Region currently led the country in reported cases of road traffic crashes, injuries and deaths for this year.

Ahead of the conference, the party inaugurated a National Planning Committee (NPC) under the chairmanship of the First National Vice-Chairperson, Ms Rita Talata Asobayire.

It was charged with the responsibility of coordinating the activities of all the subcommittees to ensure the smooth organisation of the conference.

Per Article 10(2) Sub-section One of the NPP Constitution, there shall be a national annual delegates conference which shall be the supreme governing body of the party.

Per the provisions of the article, the annual delegates conference shall meet once every year to, among others, deliberate and make appropriate resolutions on the National Chairperson’s statement, the General Secretary’s Report, the National Treasurer’s Statement of Accounts, among other provisions.

The last annual delegates conference was held in Cape Coast in 2020.

There will, therefore, be no elections at the national delegates conference in Kumasi.

The Kumasi conference will discuss issues of welfare of members of the party and also consider the recommendations from the constituency and regional delegates conferences to improve the fortunes of the party.

The conference will also come up with initiatives to support the government to enable it to break the eight-year cycle.

A member of the local organising committee in charge of Operations and Grounds, Mr Kwabena Nsenkyire, told the Daily Graphic that everything was on course to ensure a successful conference.

In 2017, the party’s delegates conference in Cape Coast was adjourned and subsequently reconvened in Kumasi where the constitutional amendments were adopted.

It held another conference in 2018 in Kumasi where elections were held.

In 2019, the party held its conference at the Trade Fair Centre in Accra.

The 2021 conference in Kumasi this weekend will prepare the grounds for the national elections in Accra next year.