Maintaining political stability in West Africa: Has ECOWAS Parliament lived up to its mandate? 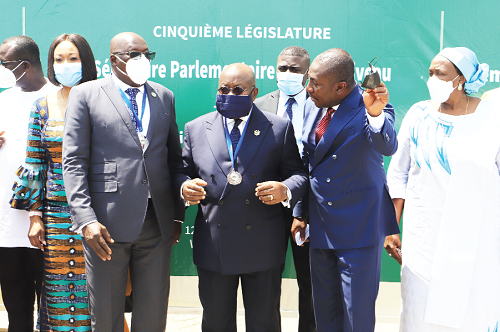 President Akufo-Addo (middle) interacting with Mr Alexander Afenyo-Markin (2nd from right), MP for Effutu, at the opening session the extraordinary session of the ECOWAS Parliament. With them is Dr Sidie Mohamed Tunis, Speaker, ECOWAS Parliament

The Extraordinary Session of the ECOWAS Parliament opened in Winneba in Ghana earlier this month, with a focus on how the legislators from the member states will examine the issues surrounding electoral practices and the increasing attempts by leaders to avert the overstay of Presidents in office.

The focus was very critical since it allowed the 115 Members of Parliament (MPs) of the regional bloc to appraise the electoral system in member states in order to identify the challenges confronting the peaceful conduct of elections and put forward proposals for possible solutions to the various shortcomings observed in the conduct of polls.

However, it is expected that any failure on the part of the bloc’s lawmakers to proffer time-tested solutions to challenges facing democratic governance could cause ECOWAS to be seen as a body of failed states, even though since 2017, 14 of the 15 member states had remained democratic-leaning.

Today, the regional body’s reputation for upholding democratic norms is facing a serious crisis as a growing number of West African leaders are beginning to engage in what the Speaker of the ECOWAS Parliament, Dr Sidie Mohammed Tunis, describes as the “phenomenon of amending the constitution” or rules to consolidate power and resist stepping down at the end of their mandated terms.

We have had some examples in the recent past that have continually threatened to erode democratic gains in the region.

For example, on September 5, 2021, the Guinean military, led by Lieutenant Colonel Mamady Doumbouya, overthrew the country’s 82-year-old President Alpha Condé, who was accused of advancing a constitutional referendum to extend the length of presidential terms from five years to six.

The fear was that Mr Condé would use such amendment as a pretext to justify a bid for a third term, disregarding repeated calls by the citizens and civil society organisations to stop such a move.

In Togo’s 2020 presidential elections, President Faure Gnassingbé claimed a first round victory, and fourth term in office, despite widespread popular discontent that saw massive protests over the previous two years.

In September 2015, ECOWAS sent a high-level delegation to Ouagadougou, Burkina Faso, after military leaders loyal to ousted President Blaise Compaoré mounted a coup against a civilian transitional government. This mediation led the coup leaders to stand down, enabling the resumption of the democratic process.

Again in 2009, ECOWAS refused to recognise Nigerien President Mamadou Tandja’s legitimacy after the expiration of his second term, despite Tandja’s having organised a disputed referendum and election in support of a third term.

Has the bloc been inactive?

In almost each of these political upheavals, ECOWAS has largely been accused of standing by as established democratic processes were thrown to the dogs. The bloc’s inaction is largely blamed to have allowed these political instabilities to have occurred in spite of the fact that the bloc had adopted what it described as path-breaking 2001 Protocol on Democracy and Good Governance.

This protocol enshrines democratic norms as the standard for the region and sets out collective responsibilities for regional members to uphold democratic processes when these come under attack.

It is against all these past triggers of political instability and insecurity in the region that the call by the Speaker of the ECOWAS Parliament, Dr Sidie Mohammed Tunis, at the high-level parliamentary seminar in Winneba, Ghana, for the bloc’s lawmaking body to pay serious attention to the new phenomenon of amending the constitution before an election or before the expiration of the tenure of an incumbent President is welcoming.

The four-day seminar held on the theme “Two decades of democratic elections in ECOWAS member states: Achievements, challenges and the way forward”, allowed the 115 members of the non-legislative assembly to take an appraisal of the electoral systems in member states, identify challenges and put forward proposals for possible solutions to the various shortcomings observed in the organisation of elections and other threats to democracy in the region.

Admittedly, while leaders of the bloc had often imposed sanctions on some authoritarian leaders including suspending them from the bloc, the practice of amending the constitution to favour their cause today still continues, undermining constitutional democracy in the region.

In the view of Dr Tunis, the practice has been eroding the gains made as a community, sinking the region into more chaos, and creating a serious reputational risk for ECOWAS as an institution.

It is for this reason that the members of the ECOWAS Parliament must support his call that “it has become necessary that we go beyond statements that merely condemn these actions and consider imposing harsher penalties on would-be perpetrators.”

“If we do not take firm and very decisive actions against this ugly trend, ECOWAS will not only be perceived as a body of failed States but will indeed fail,” he warned.

Given the important role that an elected Parliament plays in facilitating the citizenry’s participation in regional governance, which is critical to addressing some of the challenges facing democratic governance in the region, many believe it is time that representatives to ECOWAS were elected by the people as against the practice where national assemblies of member states nominate MPs to ECOWAS, which was established under Articles 6 and 13 of the ECOWAS Revised Treaty of 1993.

The election of MPs by direct universal suffrage is expected to empower the citizens of member states to directly elect those who are to represent them at the bloc’s Parliament to promote governance in the region.