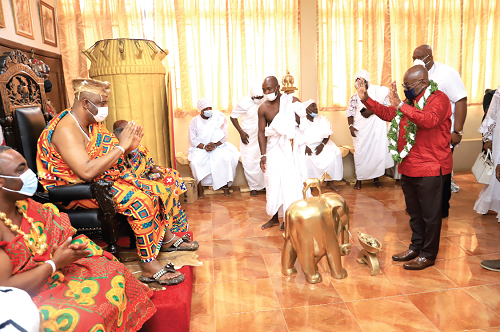 The introduction of the MMDCEs formed part of the second day of President Akufo-Addo’s tour of the Greater Accra Region.

He introduced the MMDCEs to the Ga Mantse as the people he would be working with in the region for the next four years.

Although there are 29 Metropolitan, Municipal and District Assemblies in the Greater Accra Region, the chief executives for Ledzokuku Municipal Assembly (LEKMA), Mr Mordecai Quarshie, and Ningo-Prampram District Assembly (NiPDA), Latif Amanor, are yet to be confirmed.

President Akufo-Addo commended the elders of the Ga State for ensuring the installation of a Ga Mantse who had also pledged to secure peace and security in the Ga State.

He noted that chieftaincy issues were taking the time and resources of the central government, and welcomed the decision of the Ga Mantse to ensure peace in the Ga State.

Touching on requests by Nii Teiko Tsuru, for the renaming of the Greater Accra Region Ga Dangme Region, the President said the requests would be looked into favourably.

He, however, stated that renaming of the region was the work of the government and he would consult the appropriate agencies and authorities about that.

Earlier, the Ga Mantse, making a case for the renaming of the region, explained that it would aid in the efforts at unifying the people in the region and consolidating the Ga State.

"Your Excellency, I am sure you are mindful of our desire to change from the Greater Accra Region to Ga Dangme Region. This is part of efforts towards unification and consolidation of the Ga State," Nii Teiko Tsuru stated.

The Ga Mantse also expressed concern at the threat to the existence and culture of the Ga people through the non-teaching of the Ga language in many of the schools in their communities.

He requested that the teachers that were trained to teach the Ga Language be posted to Ga community schools to teach the language.

As part of efforts to address the problem, he said, the Ga traditional rulers were reaching out through their social media handles to teach the Ga language.

Nii Teiko Tsuru pledged the support of the traditional council to maintain peace and unity in the Ga State and resolve all chieftaincy disputes within the shortest possible time.

That, he stated, would facilitate the development of the Ga State and Ghana as a whole.

He, therefore, asked for the support from the security agencies in attaining their objectives.

He said the Ga State appreciated the development projects being undertaken in the region and asked for more especially in the area of drains.

He announced that the traditional council in collaboration with the Regional Coordinating Council would embark on inspection of ongoing projects such as the James Town Fishing Harbour, Salaga Market and the development of schools to acquaint themselves with the projects.

He commended the President for the processes he used to appoint the MMDCEs.

Nii Teiko Tsuru said the traditional council was enthused about the nomination and confirmation of the first ever female Metropolitan Chief Executive of the AMA.

That appointment, he said, would advance the cause of the Ga Girls Child project and empowerment of women.