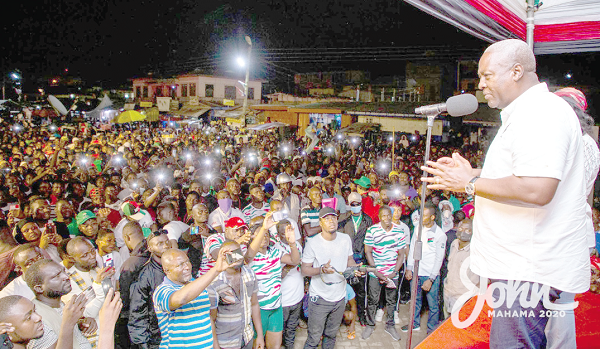 The Presidential Candidate of the National Democratic Congress (NDC), former President John Dramani Mahama, has promised to restructure the small-scale mining business to make it more effective, environmentally friendly and responsive to the needs of the host communities when he wins the December general election.

He said the restructuring would also aim at making the activity a job creation avenue for the youth, especially those in mining communities.

“I believe we must regulate small-scale mining to protect the environment and ensure safe mining so that the youth in those communities can have a source of livelihood for themselves and their families,” Mr Mahama said.

Mr Mahama gave the assurance when he engaged artisans, chiefs and supporters of the NDC in the Atiwa East and West, the Fanteakwa North and South, the New Juaben North and South and the Abuakwa North constituencies in the Eastern Region last Saturday.

The separate engagements formed part of the third day of his four-day tour of the Eastern Region.

He said the next NDC government would also institute a Gold Board, which would work with the University of Mines in Tarkwa in the Western Region and the regulatory agencies in the mining industry to reclaim lands affected by mining.

He said the board would also institute additional measures to protect the environment while ensuring that small-scale miners operated legitimately without police interference.

Under the next NDC government, he said, graduates and experts in mining would be deployed to mining communities to train and assist small-scale miners on best mining practices to help eliminate accidents and the hazards associated with illegal mining.

At Anyinam in the Atiwa East Constituency, the former President said it was the right of people in mining communities to harness the benefits from the resources bequeathed to them by nature with the help of the government.

He assured the people that the next NDC government would create the opportunity for miners to have their gold refined in the country to help boost the economy.

“To add value to their products, we must, and we shall refine more gold for export. Let me assure you that we will involve the Bank of Ghana in certifying quality refined Ghanaian Gold and we will work with the KNUST Jewellery Training Centre to establish a first-class unique jewellery market in Ghana,” Mr Mahama said.

At Nkwakwa, where he ended the day around 11 p.m., former President Mahama said his next NDC government would set up a Skills Development Centre in each district to formally train students in technical and vocational skills.- #GhanaVotes2020